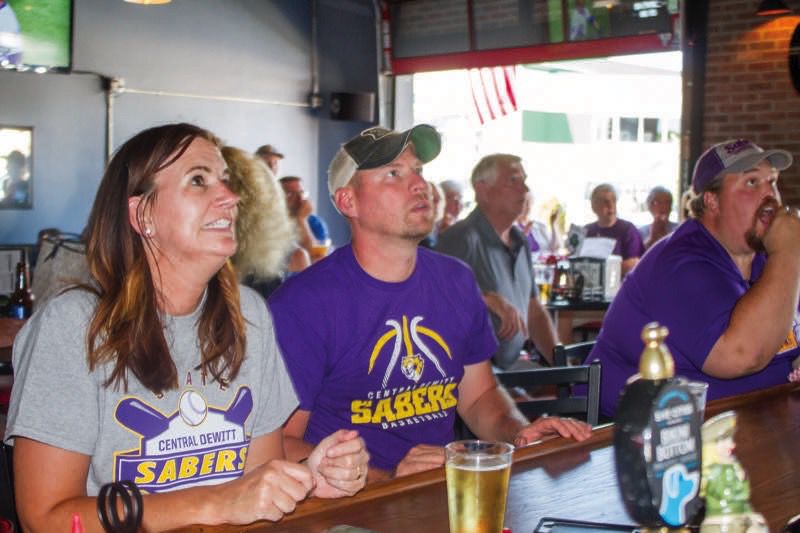 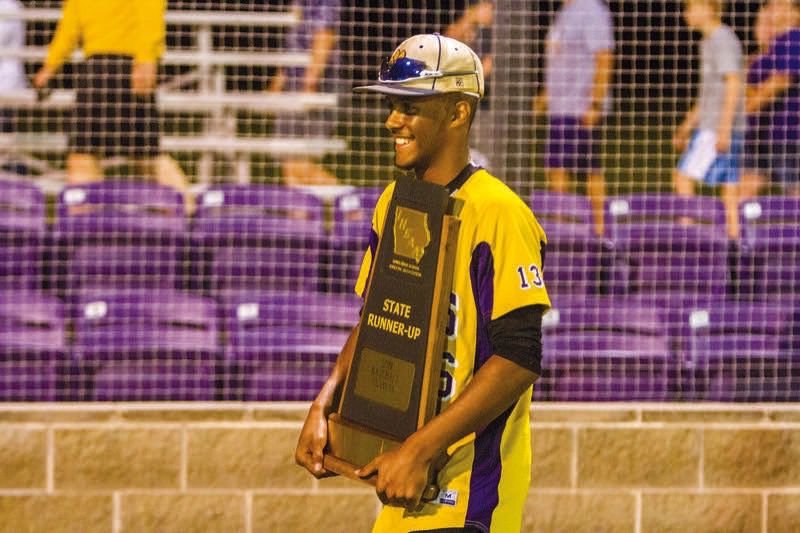 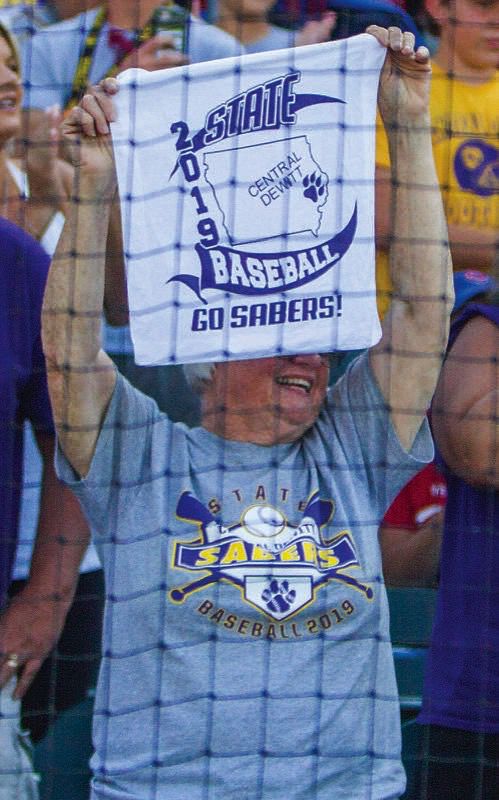 A Central DeWitt fan displays a towel touting the Sabers’ third-ever trip to the Class 3A state baseball tournament.

A Central DeWitt fan displays a towel touting the Sabers’ third-ever trip to the Class 3A state baseball tournament.

The bus carried the Sabers to the school’s baseball field while somewhere between 200-300 proud fans jumped in their cars and followed in hot pursuit.

Families filled the grandstands while the baseball players positioned themselves near home plate and faced the stands. Athletic Director Kurt Kreiter was the first to speak.

He praised the baseball team’s achievements, such as setting the school’s single-season win record with 38 victories, when someone from the crowd yelled, “And they beat Assumption!”

That emphatic statement elicited a big cheer from the audience.

It also seemed to capture the prevailing mood, which was something akin to: “Oh, was there a game on Saturday? I only remember Friday when we beat the two-time defending champions from Davenport … you know the perennial powerhouse that owns 12 state titles … the No. 2-ranked team … and the team that beat us in the substate final last year!”

After losing to No. 1-ranked Xavier in the Iowa Class 3A title game, the Sabers weren’t grinning from ear-to-ear, but they weren’t moping around either.

Because of DeWitt’s proximity to Davenport, the path to the state tournament in any sport — boys and girls — means usually having to face Assumption. The Knights have won the lion’s share of those contests, snarling countless athletes’ hopes and dreams of competing on the premier stage.

A day later, Mary Alger, mother of senior first-baseman Jake Swanson, said she asked her son a hypothetical question while referencing the fire truck escort and the throng of fans who welcomed the team home late Saturday night.

Her question: “Would it have been any different if the Sabers had won the title?”

Doubtful. No one was complaining.

A moment later, senior catcher and pitcher Garrett Finley spoke to the audience. He is one of five seniors on the team.

Finley polished off a terrific year at the plate with a flurry of hits during the state tournament. His head coach, Shane Sikkema, later called him the “best hitter in Class 3A.”

The coach also referred to “Bix” —senior Lucas Bixby — as the “best pitcher in Class 3A,” and he said senior Devin Hurdle was the “best shortstop in our school program’s history.”

Then there’s Swanson, who is a big first baseman who had been battling tightness in his shoulder throughout the summer. That was disappointing for him, but he still is a guy who likes to “keep it light” in the dugout, according to Alger.

Then there is Drew Eden, who started 11 games, was a key player off the bench and, by all accounts, an effective leader.

On Friday afternoon, a few dozen fans gathered at Murphy’s Pub, which had transferred a livestreaming from a computer to the bar’s large TV screens.

So, someone at the bar knows a thing or two about technology. Maybe the whiz kid was Connor, one of Nancy and Mike Murphy’s three kids who attended DeWitt Central and also is part owner of the bar.

There wasn’t a lot of hooting and hollering during Friday’s state semifinal against Assumption. The atmosphere was more pensive than excited. At times, one could have heard a pin drop.

The most animated people watching the game easily were a group of older ladies. The five seniors were hanging on every pitch. If anyone was making a little noise, it was them.

It’s not polite to eavesdrop, but the ladies’ conversations were interesting and educational. These ladies were not fair-weathered fans who had jumped on the bandwagon during the playoff run. They talked about Central DeWitt baseball’s team as if they had watched every pitch of every game.

When someone inquired about the somewhat “subdued” audience, the response was quick and resolute.

“Everyone will cheer after we win,” said Verda Scott.

“Not until the fat lady sings,” pitched in Lois Canaday.

Carol Macumber said she has been watching DeWitt baseball for several years.

“My grandsons all played for the school,” she said. ‘They’re done now, so I’m just passing down to the next layer of relatives.”

Ardy Schnittjen was the quiet one among the charismatic bunch. She said simply that she and her late husband are longtime supporters of the school.

On the other side of the bar, Julie Small, of DeWitt, said her husband, Carl, is a counselor at the school.

“This guy batting is the son of a mother who I run with, so I’m just passing some good vibes his way,” she said while nodding toward the TV.

And watching the game from an outside chair was senior-to-be Carleigh Jefford, who said she is close friends with some of the ballplayers.

“They’ve been working their way up to this,” she said. “They’re humble, confident but not too confident. They want the best for each other.”

And what if the Sabers win Friday’s game but lose the championship game?

“They’ll be mad, but they’ll be proud of what they did,” Jefford added. “Winning this game (against Assumption) would be huge.”

Déjà vu all over again.

Generally sunny despite a few afternoon clouds. High around 20F. Winds SSW at 10 to 15 mph.