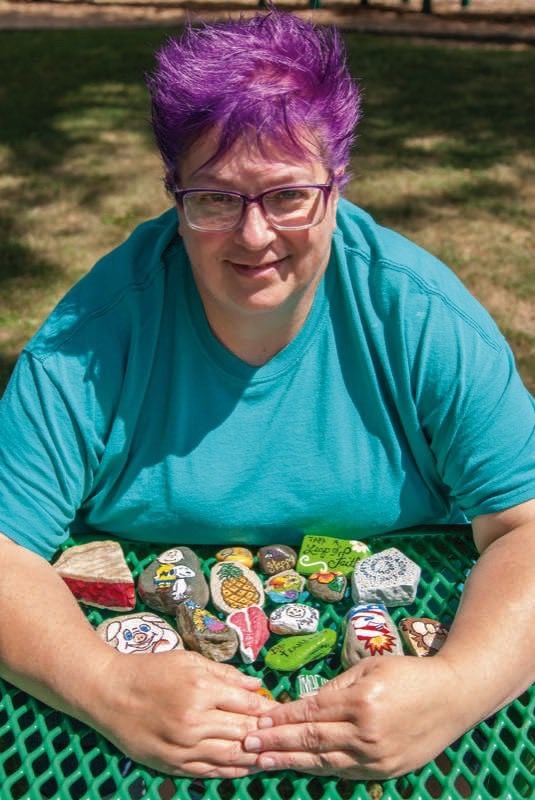 Lu Ann Freese, of DeWitt, shows has painted hundreds of “kindness rocks” to give to others or to “hide in plain sight” for others. She is working to create a kindness rock garden in Lincoln Park. 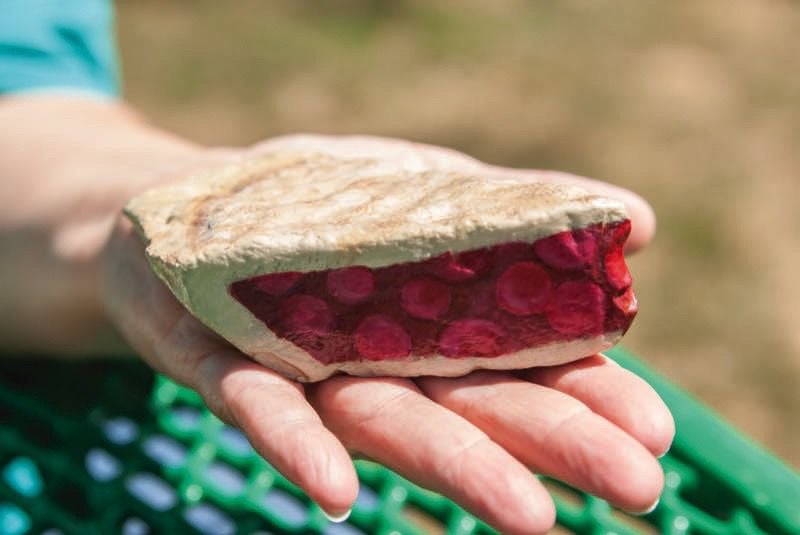 A slice of pie — specifically, cherry — is what Lu Ann Freese visualized when she noticed an oddly shaped rock. She often paints motivational sayings as well as designs ranging from T-bone steaks to pickles to cartoon characters.

Lu Ann Freese, of DeWitt, shows has painted hundreds of “kindness rocks” to give to others or to “hide in plain sight” for others. She is working to create a kindness rock garden in Lincoln Park.

A slice of pie — specifically, cherry — is what Lu Ann Freese visualized when she noticed an oddly shaped rock. She often paints motivational sayings as well as designs ranging from T-bone steaks to pickles to cartoon characters.

While Lu Ann Freese, of DeWitt, was recovering from surgery in January, she needed something to do.

After all, she was stuck indoors during a long, cold winter, and she missed seeing the kids every day at Creative Learning Center, where she has worked for nearly 13 years.

The 59-year-old recently learned about a grassroots movement called “kindness rocks,” in which people give out and receive rocks painted with images of cartoon characters, animals, designs, quotations, etc.

The rocks often are posted on social media, and those who find them share where they were located. It’s a small gesture meant to brighten someone’s day, and has grown to become a worldwide phenomenon.

Freese decided to put her energy and artistic ability into creating her own kindness rocks. She estimates she has made hundreds of them since the beginning of the calendar year.

They have been placed by family and friends throughout the U.S. and even abroad, including Scotland.

On the back of each of her rocks, Freese includes instructions for the finder: “Post to QC Rocks on FB (Facebook), keep or rehide.” She also includes her initials, so she knows which ones are her creations.

Now, she — together with her friend, Shawn Everett — wants to make them more accessible to DeWitt residents by creating a kindness rock garden at Lincoln Park.

“I cannot begin to say how excited I am about this,” she said with a smile. “But I don’t want people to think I’m crazy.”

Members of the DeWitt Parks and Recreation Commission certainly didn’t think she was, when Freese presented her idea.

“To me, it’s such a positive program,”

said Parks and Recreation Director Kevin Lake. “It would be neat if schools could paint and hide the rocks as class projects, or the Scouts or any youth organization.”

The garden would take up a portion of the landscaping surrounding the wooden Saber Tooth Tiger statue near the southeast corner of the park.

While the area has yet to be prepared, Lake said that should happen soon.

Freese wants to have a mix of plain rocks, some painted different colors and some that already contain different cartoon characters, designs and uplifting sayings for park visitors to choose from.

Manatt liked the idea so much, he agreed to donate 10 to 15 one-gallon buckets full of smooth, river rock for the garden.

To thank him, Freese painted Manatt a rock featuring none other than “Mr. Slate,” boss of Fred Flintstone at the Bedrock Quarrel & Gravel Company.

“Tony has been so generous,” she related. “The whole idea behind this is simple; you don’t have to have artistic ability. It’s just a small act of kindness to make somebody smile.”

Freese has created a colorful sign that will be placed in the garden, which tells people exactly what they are supposed to do with the rocks: “Take one for motivation, Leave one for inspiration.”

While fans of her work call her an “amazing artist,” it’s a compliment Freese modestly brushes off, insisting it’s simply something that helps her kill time.

She hopes people who aren’t familiar with kindness rocks will be inspired to get involved and bring a little happiness to the world.

“It’s really just about spreading the love,” Freese shared. “You don’t have to be an artist. Think about it: If you’re having a bad day, and you find one of these rocks, maybe one that says, ‘So glad you found me!’ how neat that would be? It’s just a rock, but if it says, ‘Throw kindness around like confetti,’ you might think, ‘Gosh, I can do that!’

“Something as small as a little rock can change someone’s day or their outlook on life. And who doesn’t want a little kindness in their day?”

Scattered thunderstorms developing late. A few storms may be severe. Low 69F. Winds SSE at 10 to 15 mph. Chance of rain 50%.