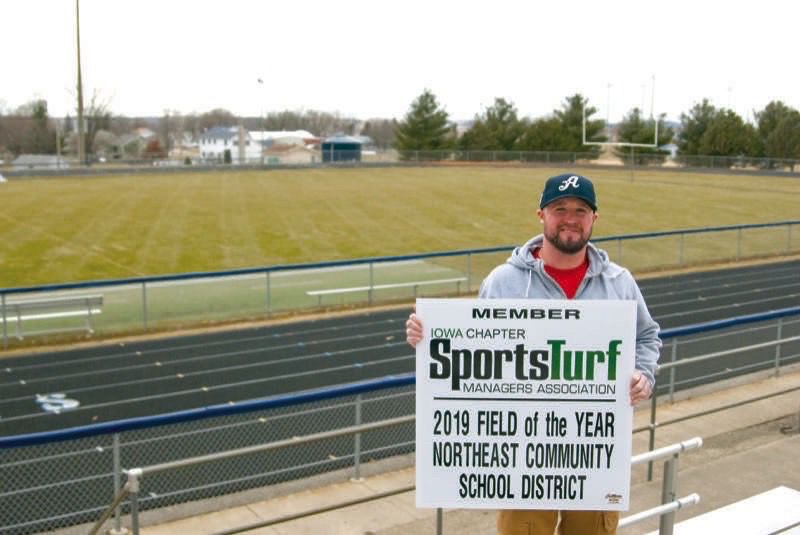 Shaun Eberhart, of Charlotte, who is director of grounds for the Northeast Community School District in Goose Lake, recently received the Field of the Year Award from the Iowa Sports Turf Managers Association. 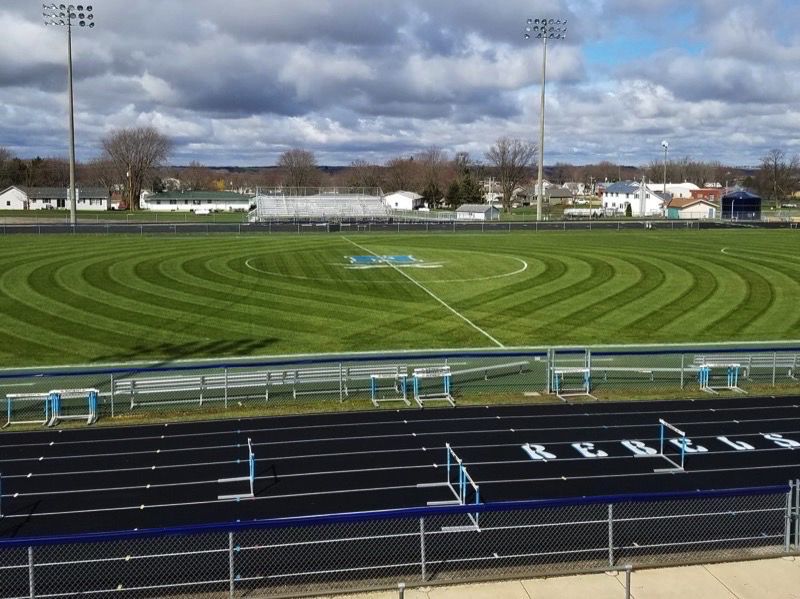 Award-winning field: The football field at Northeast High School in Goose Lake also serves as the district’s soccer field. Northeast graduate Shaun Eberhart is the district’s director of grounds and has won various awards throughout his brief career for his meticulous work.

Shaun Eberhart, of Charlotte, who is director of grounds for the Northeast Community School District in Goose Lake, recently received the Field of the Year Award from the Iowa Sports Turf Managers Association.

Award-winning field: The football field at Northeast High School in Goose Lake also serves as the district’s soccer field. Northeast graduate Shaun Eberhart is the district’s director of grounds and has won various awards throughout his brief career for his meticulous work.

While many kids consider having to mow the grass a necessary — yet terribly tedious — chore, Shaun Eberhart admits, he enjoyed it when he was a kid.

That genuine fondness for yardwork came after the son of John and Karen Eberhart, of Charlotte, made note of the different outfield mowing patterns of major league ballfields on television.

Once he mastered how it was done, Eberhart actually took pleasure in taking care of his parents’ lawn.

Now, the 2009 Northeast graduate makes a living out of making sure sports fields look their best.

His skill and attention to detail has not gone unnoticed.

The director of grounds for the Northeast Community School District for the past six years recently received the Field of the Year Award, given by the Iowa Sports Turf Manager Association (ISTMA).

The purpose of the award is to recognize the excellence of sports fields maintained in Iowa.

This is not Eberhart’s first time being honored for his talents.

Since he began working for Northeast in November 2013, the district’s football and baseball fields have been selected as recipients of the Pioneer Athletics Field of Excellence Award.

Pioneer Athletics, a nationwide field paint manufacturer, annually selects 90 fields across the country throughout all levels of competition to be selected for this award.

In 2017, he also was named Sports Turf Manager of the Year by the ISTMA.

Eberhart said it wasn’t until he was a senior in high school that he was able to see a professional groundskeeper in action.

“I was in a baseball tournament at the LumberKings’ stadium (in Clinton),” he related. “I couldn’t believe they paid someone to mow, work outside and have his office be a baseball field. Instantly, I knew that was what I wanted to do and began looking for colleges that offered a sports turf management program.”

It was while he was still in high school that Eberhart started his career in turf management with the Clinton LumberKings.

During and after his time in college, he honed his skills by working for the city of Iowa City, the Boston Red Sox, Minnesota Twins and Upper Iowa University.

It was after college, when he was working for the Reno Aces, that Northeast was renovating its softball field and constructing a brand-new baseball field.

Jim Cox, who was superintendent of the district at that time, contacted Eberhart in hopes he would agree to oversee the construction and maintain the fields once they were complete.

While he never had any intention of working for his alma mater — or even returning to the area, for that matter — Eberhart agreed to take the newly-created position of director of grounds.

“Six years later, I’m still here,” he said. “The best part about working at Northeast is I’m able to give a product the taxpayers, students and staff can be proud of.

“My favorite part of the job is the end result; the baseball/softball field right before the first pitch, or the football field just before kickoff. Getting them to look their best is a culmination of so many things that go unnoticed. Grass doesn’t go off a Monday through Friday schedule, and Mother Nature doesn’t care about my agenda. Sometimes to get the fields to look their best involves volunteering hours on weekends and holidays.”

But this award, Eberhart noted, makes it all well-worth the trouble.

He admitted, his biggest flaw as a turf manager is letting others help. While Eberhart appreciates when people want to lend a hand, he likes to ensure the job will get done to his standards.

Those standards, he confessed, are pretty high.

“Despite being in charge of 55 acres at Northeast, I try to be as detail-oriented as time allows,” he explained.

Eberhart doesn’t pretend that his passion for the perfect lawn extends to his own.

In fact, he speculates he may have “the worst lawn in Charlotte.”

“I have some areas that fringe on violating the city ordinance, and others that are bare dirt that I’ve said I would sod for four years now,” Eberhart related. “As much as I love mowing, when I get home from work, that last thing I want to do is touch a lawnmower. I’ve considered hiring it out, but I think that’s against the Turf Manager’s Code of Conduct.”

All kidding aside, Eberhart was truly humbled by his latest accolade. He also is a self-proclaimed “huge proponent” of encouraging high school students to look into a career in the trades.

All students learn different and have different interests, he noted. Eberhart can say, without a doubt, he truly loves his job and considers that a blessing.

“To get kids into a profession like mine, I would emphasize just how rewarding it is,” Eberhart said. “My fields are often a direct reflection on me. I always like to say I’m in the aesthetics business. It’s a blessing and a curse. If the fields look great, that’s on me. If they look terrible, that’s also on me.

“My work is extremely rewarding. The fields are just the result of a much larger body of work. From the soil, which we sample to make sure the fertility is always in balance. To the grass, which we mow on a consistent schedule and sharpen the blades frequently to ensure a clean cut. Knowing that, the sight of a nice sports field when it’s at its best is extremely rewarding.”