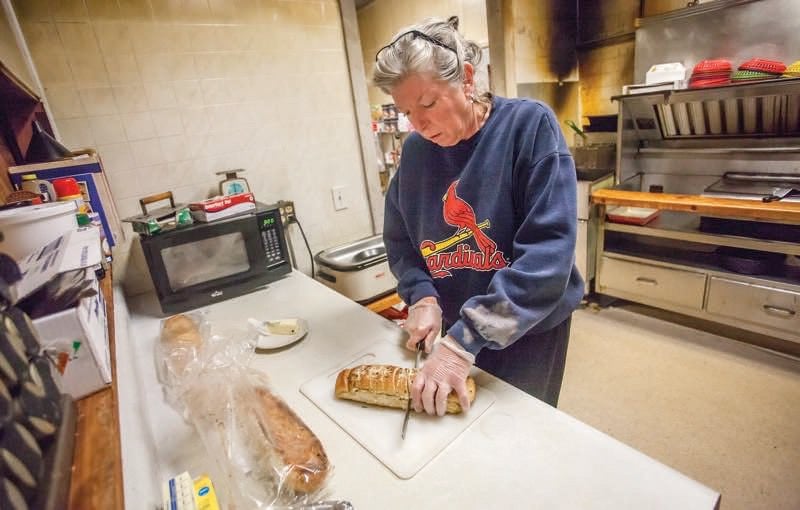 Julie Steffens, owner and cook at Steffens’ Tap in Calamus, is hard at work in her kitchen. Steffens has provided lunch for kids in and around Calamus since school closed near the end of March. 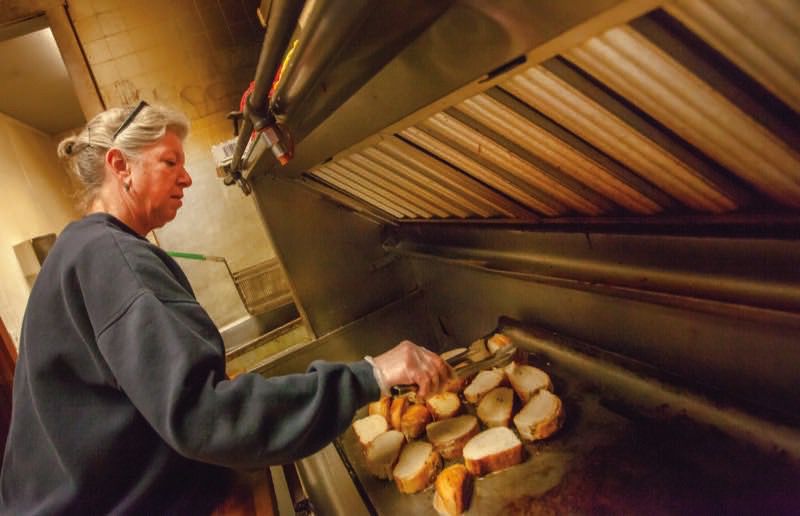 Julie Steffens, owner and cook at Steffens’ Tap in Calamus, toasts garlic bread. She has helped keep area kids fed — partially on her own dime — since March.

Julie Steffens, owner and cook at Steffens’ Tap in Calamus, is hard at work in her kitchen. Steffens has provided lunch for kids in and around Calamus since school closed near the end of March.

Julie Steffens, owner and cook at Steffens’ Tap in Calamus, toasts garlic bread. She has helped keep area kids fed — partially on her own dime — since March.

Over the last couple months, though, a new variety of vehicle has staked claim to the curb in the area near Steffens’ Tap, and those vehicles have pedals.

Their owners have become accustomed to congregating downtown as they patiently wait for a delicious meal. And on this particular Tuesday, lasagna is on the menu.

Julie Steffens, owner and operator of Steffens’ Tap, has been cooking meals – sometimes upwards of 40 per day –  for kids in the Calamus area in search of full bellies since schools were forced to close due to the coronavirus pandemic. Nine of the kids come every single day.

Steffens said the meals are for any kid who needs them, whether their families are down on their luck and need a financial boost, or they’re just plain hungry.

“I thought it was supposed to be a two week shutdown from school,” Steffens said. “So, I just put it out there (on social media) and said I will be doing kiddo lunches until school opens for anyone who is interested.”

The response she received was overwhelming. Someone – Steffens doesn’t know who – began petitioning for donations. Pretty soon, Steffens was receiving cash donations that had been dropped off at Calamus City Hall and the bank. Support came in from all over the U.S., including Tennessee, Texas, Illinois and Wisconsin, as well locally.

Steffens said she was grateful for the community outreach, especially considering the school closure went on much longer than she anticipated originally.

“If you would have told me on March 23 that I’d be cooking for the kids until May 27, I’d have told you to get out of here,” she said.

A couple weeks into the closure, Calamus-Wheatland started a lunch program of its own, which removed some of the burden from Steffens, who has put a sizable portion of her own money into food. The donations, she said, covered “some, but not all” of the lunches.

In addition to money, Steffens received food donations from a bevy of individuals that included pasta and fresh produce. That gave Steffens the freedom to try out some new recipes.

“The kiddos were my guinea pigs sometimes,” she said.

She begins her day around 8:30 a.m. to prep for the lunches. It has certainly added labor to her day.

The meals include a main dish, fresh fruit and vegetable, as well as a beverage – Friday was pop day for the older kids, a special treat – and a dessert that was usually freshly baked.

“I do enjoy cooking. I love meal planning,” she said.

She would put up a menu each week on Facebook, and kids could place their orders ahead of time.

“It’s mainly cheeseburgers and chicken strips,” she said. But, for some of the kids, variety is good. Some parents would purchase their own meals to go along with their kids”

For Steffens’ Tap, business has “been good,” she said. “The community has been very supportive.”

The toughest choice Steffens is facing now, though, is when to stop. When talking about ceasing the meals, she’s hesitant.

She searched for a natural ending to over two months of serving an average of 15 kids per day. The last day of her lunches is May 27.

“The 27th (of May) is the last day of school, so I figured on that day the parents would have needed to figure out something anyway,” she said. “I just gotta say ‘when.’ I feel bad … and there’s even one family I may keep helping.”

Around 10 a.m., the aroma of today’s lasagna is getting good. It’s starting to waft from the kitchen into the bar. Two 9x13 pans are in the oven full to the brim. It’s a good dish to utilize extra ingredients and help lower food costs.

Mozzarella, parmesan, and tomato sauce bubble away as Steffens butters and toasts garlic bread. In the kitchen, she’s in her element.

And soon the bikes will arrive.

Honor Your Loved One

Variable clouds with scattered showers and thunderstorms, mainly late. A few storms may be severe. Low near 60F. Winds NNW at 10 to 15 mph. Chance of rain 40%.

Variable clouds with scattered showers and thunderstorms, mainly late. A few storms may be severe. Low near 60F. Winds NNW at 10 to 15 mph. Chance of rain 40%.