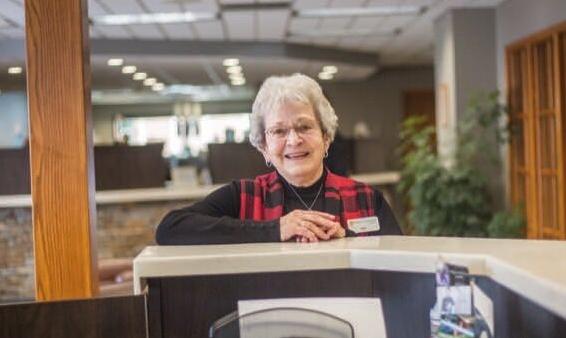 Kay Saunders recently celebrated 50 years working at First Central State Bank in DeWitt. She says, over the years, her coworkers have become family. 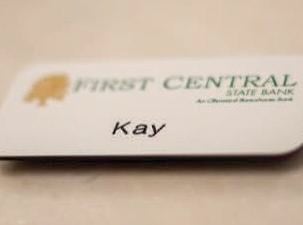 Kay Saunders has worn many hats over the years.

Kay Saunders recently celebrated 50 years working at First Central State Bank in DeWitt. She says, over the years, her coworkers have become family.

Kay Saunders has worn many hats over the years.

Over the past half century, the banking industry has seen its fair share of changes.

Cash has given way to plastic, and the implementation of ATMs, online banking and drive-up windows are used more, which has thinned the foot traffic that comes through bank lobbies.

But one aspect of banking — at least at DeWitt’s First Central State Bank — has been there the whole time.

Her name is Kay Saunders, and she will greet you with a smile (nowadays hidden under an Iowa Hawkeyes facemask). She recently eclipsed the 50-year mark at First Central.

The current front-desk receptionist is the longest tenured employee at the financial institution based in downtown DeWitt, and she’s been there even longer than one of the bank’s first managers, Al Tubbs.

Tubbs, who started in 1972 while working with his dad, Ed, said Saunders is the first-ever 50-year employee at First Central. She was recently recognized for her longevity at a statewide banker’s convention.

To celebrate her 50-year achievement, the bank donated $1,000 to a cause of Saunders’ choice; she chose the DeWitt Referral Center.

“I think Michelle (Ehlinger, referral center director) just does a wonderful job down there,” Saunders said. “I wanted that to help them.”

Sue Gravert, Saunders’ coworker at First Central, also serves on the Referral Center’s rebuild campaign whose goal is to raise money for a new Referral Center building. She said she was humbled by Saunders’ donation.

“The support of this community … is unbelievable,” Gravert said. “It’s people like Kay that will make this building happen.”

Saunders started working at the bank when she was 29. Her son, Mark, was starting school, and bank officials approached her wondering if she’d be interested in a part-time teller gig.

Saunders worked for four hours per day, over the lunch period.

“At that time the tellers did everything,” Saunders said. “We opened accounts at the window, we figured loan interest, we did everything.”

Saunders said it’s impossible to guess how many customers she’s seen over her 50 years.

After several years as a teller, (Saunders says it’s difficult to pinpoint exact dates) she began working more hours as a bookkeeper as well.

“As bookkeeping got busier and the bank grew, I did more and more bookkeeping,” Saunders remembered. “Then I also did wire transfers and investment balancing.”

More recently, Saunders worked to monitor the bank’s security systems, a position that — on occasion — would get her out of bed in the middle of the night. If an alarm went off, it was her duty to check on the source, and turn it off. No matter what it was.

“If the snowplow went through the alley sometimes the vibration would set the alarm off,” Saunders said with a chuckle. “I’d come in and turn it off, and the police were very good; they’d come in the bank with me (at night).”

Saunders recalled a memorable night not too long ago when a rogue deer broke through a window at the bank and rampaged through the building before escaping.

“That was a very exciting thing,” Saunders said. “It happened after the bank had closed at night. There was blood all over. We had Service Pro come in that night and they cleaned it up. But we had to replace windows.”

Those exciting moments were mixed in amongst years of what Saunders calls a “fantastic” career, which she doesn’t plan to end any time soon.

“I think about (retiring) for good, I do,” Saunders said. “But, my granddaughter told me ‘as long as you feel like going to work, and you like it, don’t quit.’ I can’t say there might be some days I think, oh, why do I need to get up? But over my 50 years I’ve never regretted coming in.”

Saunders said she considers all her co-workers her friends as well, and said when her husband, Mel, passed away, they became like a second family. She also fondly remembers community events in which the bank took part, like Strawberry Fest in Eldridge and parades through town in which First Central made a float.

Saunders said, looking back, she’s proud of her career. But there are other things to look forward to, including gardening, a passion of hers.

“I’m happy I was able to slow down and just (work) three mornings a week, she said. “I still feel connected with the bank in that respect.”