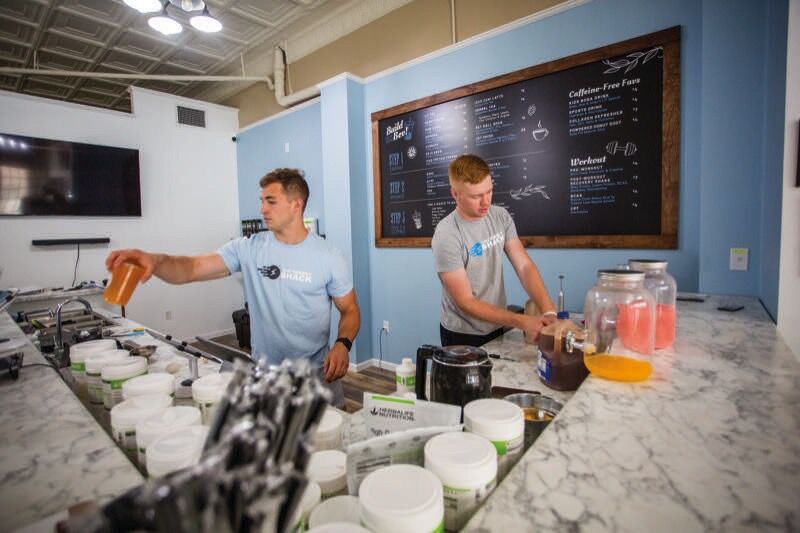 Kordell Stillmunkes and Brandon Frick, owners of The Energy Shack in DeWitt, prepare drinks for customers. The business offers energy drinks and meal replacement shakes among other items. 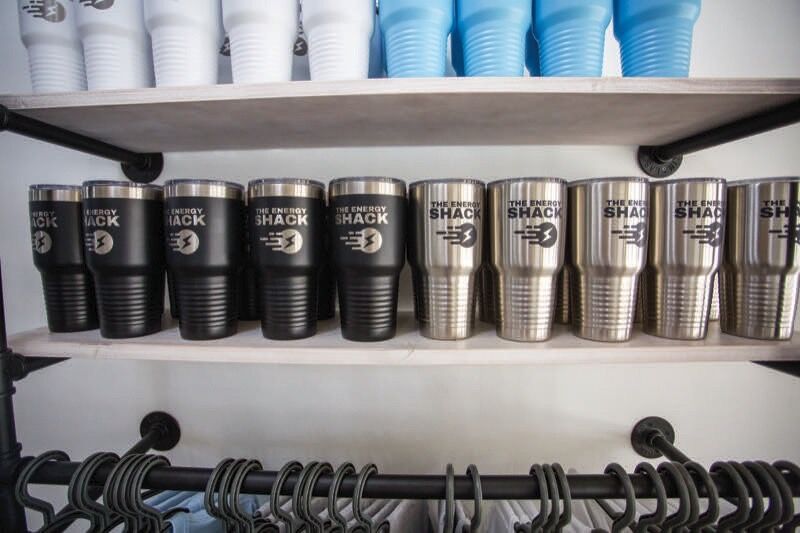 On a shelf inside The Energy Shack are mugs emblazoned with the business’ logo.

Kordell Stillmunkes and Brandon Frick, owners of The Energy Shack in DeWitt, prepare drinks for customers. The business offers energy drinks and meal replacement shakes among other items.

On a shelf inside The Energy Shack are mugs emblazoned with the business’ logo.

It certainly was a questionable ice breaker.

Brandon Frick and Kordell Stillmunkes were both studying at the University of Dubuque.

Stillmunkes was sitting in the library one day and Frick walked by.

“He thought I was someone else,” Stillmunkes said. “He actually called me Tyler. We ended up talking for four hours, and he missed a class. That was the first time we met.”

Two years later, the duo owns a business and are best friends.

That unlikely meeting produced, among other things, The Energy Shack, which opened in May at 816 S. Sixth Ave. in DeWitt.

It features energy drink cocktails that include a variety of flavors and boba, or tapioca balls. The business also offers meal-replacement shakes and coffee beverages.

The store features an L-shaped bar behind which Stillmunkes and Frick prepare the beverages made from Herbalife powdered supplement mixtures.

“I got into this business last fall,” said Stillmunkes, who is originally from Cuba City, Wisconsin. “In March I dropped out of (college) and got on full time managing a (similar) shop back home.”

Shortly thereafter Stillmunkes looked to open a spot of his own. That’s where Frick, a Central DeWitt grad, came in.

“He said, ‘Come check out DeWitt,’” Stillmunkes recalled. “And I did. He had a couple locations picked out for me to look at, and the first time I saw this place I could picture the bar here. Three days later I signed the lease and six weeks after that we had the doors open.”

Frick, who left a young career in the financial industry to join forces with Stillmunkes in his own hometown, says it was a good choice.

“If I was to trust anyone’s gut feeling, it would be him,” Frick said of Stillmunkes. “He’s worked his entire life and done things people can’t imagine. I’ve never seen him fail at anything, and I’ve known him long enough to trust him, and I love DeWitt, so those two things worked out.”

The business is part of a network of similar energy drink bars across southern Wisconsin and parts of Iowa, including Dubuque, Stillmunkes said.

Stillmunkes, a former walk-on football player at the University of Iowa, also works as a personal trainer, and said he’s motivated to help people live healthier lives. To that end, he and Frick are planning to host free workouts for community members in the future. Details are yet to be ironed out.

Also in the works is a plan to exhibit custom, local art on the expansive walls that make up their shop in downtown DeWitt. Anyone who would like to potentially help fill a spot on the wall can call (563) 659-7595.

Stillmunkes said the initial support for the business has been great and that most shopkeepers up and down Sixth Avenue already have stopped in for a beverage and a chat.