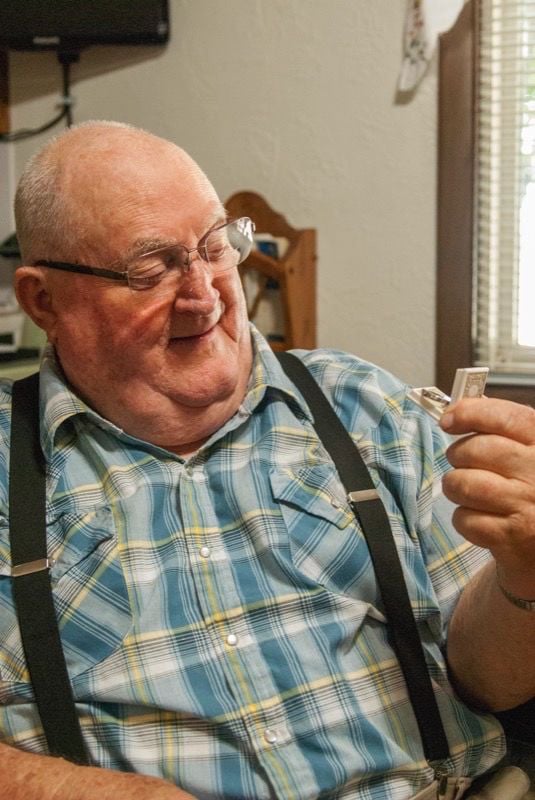 Richard Walker, of DeWitt, admires his long-lost wedding band, which recently was found after having been missing for 40 years. 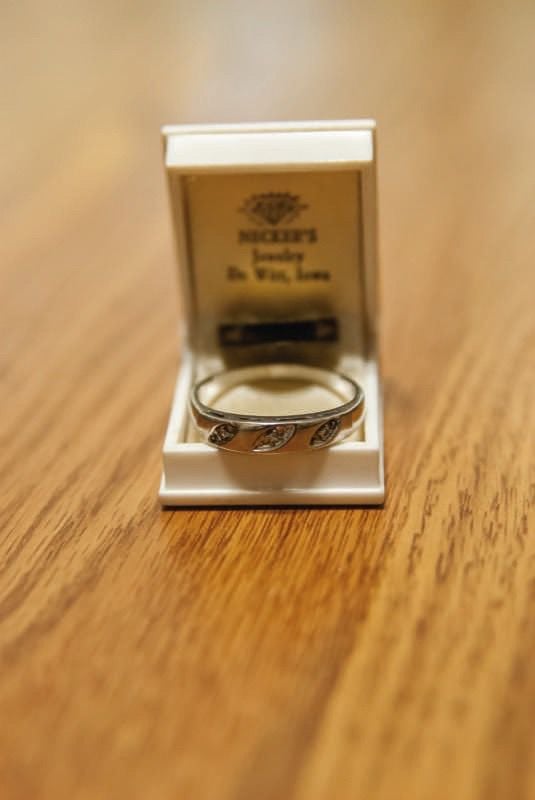 Even though it had been missing for four decades, Richard Walker always kept the box his wedding band came in. It had been purchased at Necker’s in downtown DeWitt.

Richard Walker, of DeWitt, admires his long-lost wedding band, which recently was found after having been missing for 40 years.

Even though it had been missing for four decades, Richard Walker always kept the box his wedding band came in. It had been purchased at Necker’s in downtown DeWitt.

Sitting on the kitchen table of Richard Walker’s DeWitt home recently was a small, white box.

Nestled inside was a white-gold wedding band containing three round diamonds.

“There it is,” he said, admiring it with a smile.

That was two days after the ring — which was Walker’s original wedding ring — suddenly was unearthed after it had been missing for 40 years.

Walker said he knows the Lord works in mysterious ways, but the fact the band finally appeared after four decades seems nothing short of a genuine miracle.

The 83-year-old and his wife, Marlene, celebrated their 60th wedding anniversary in March.

The couple lived on Walker’s family farm east of DeWitt until they moved into town in 2002.

It was the same farm where Walker was born — in what used to be the dining room, in fact — on a hot summer day in June 1936.

It was where he grew up, and where he and Marlene raised their family.

It also was where he lost his wedding band, the same one his bride-to-be had purchased for him at Necker’s in downtown DeWitt before their wedding in the spring of 1959.

Thankfully, his finger was spared, but the band was bent. Walker took it to the jeweler to be straightened and wore it a couple more times. After that, he opted to do what he believes ultimately led to the ring being lost.

“I carried it in my pocket,”

Walker said, “which I shouldn’t have. I always carried it with my change. At the end of the day, I’d always throw my change and the ring in a drawer. One day, I went to get the change out of the drawer and the ring wasn’t there.”

Walker and his wife were determined to find it. They retraced Walker’s steps and went to restaurants and other places he’d visited to see if it had turned up. The couple even checked with a few pawn shops to see if someone had brought it in.

“I thought that was it,” Walker related. “I thought it was gone forever.”

He bought another ring, but still kept the small, white box his original wedding band came in.

Fast-forward to a few weeks ago, when Walker’s neighbor, Dave Delich, showed him a picture of a ring someone had found.

That someone was Andrea Vinson, who, together with her husband, purchased Walker’s acreage in 2003 after he and Marlene moved to town.

Vinson found the ring laying in the grass near the sidewalk that runs alongside the east side of the house. She figured since it didn’t belong to anyone in her family, Walker might recognize it.

He did, almost instantly.

“I don’t know who was happier,” Walker said with a laugh. “Me or Andrea … she was just as excited as I was.”

Both Walker and Marlene were equal parts stunned and delighted. He had thought about the ring at different times over the years, but never imagined that one day it would be found.

Walker said the only thing that amazes him more than the ring turning up, is its near-pristine condition. It had been in dirt and exposed to the elements for decades, yet still looks almost exactly the same as it did when he lost it.

“If there’s one thing we found out, is this thing is weather-proof,” Walker joked.

He also can’t begin to express his gratitude to Vinson for reuniting him with his beloved ring.

“Her thoughtfulness and honesty,” Walker shared. “I appreciate that so much. It might not have been mine, but she checked with me first. Andrea [and her husband] are such caring, honest people. It means a lot to us.”

Now that he has it back, Walker said he intends to keep the ring in a safe, so he doesn’t lose it again “for another 40 years.”

As he sat staring at the ring, Walker started to smile, noting its only flaw.

“You see, we have a little problem here,” he said as he — unsuccessfully — tried to slip the band on his ring finger. “This ring shrunk over the years, and now it only fits on my pinky.”