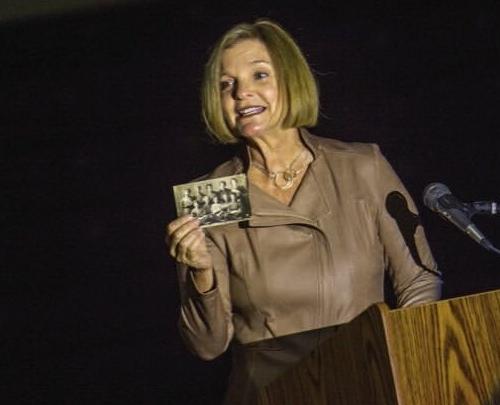 Liz Mathis thanked her family members — namely teachers — for helping her and others find success. 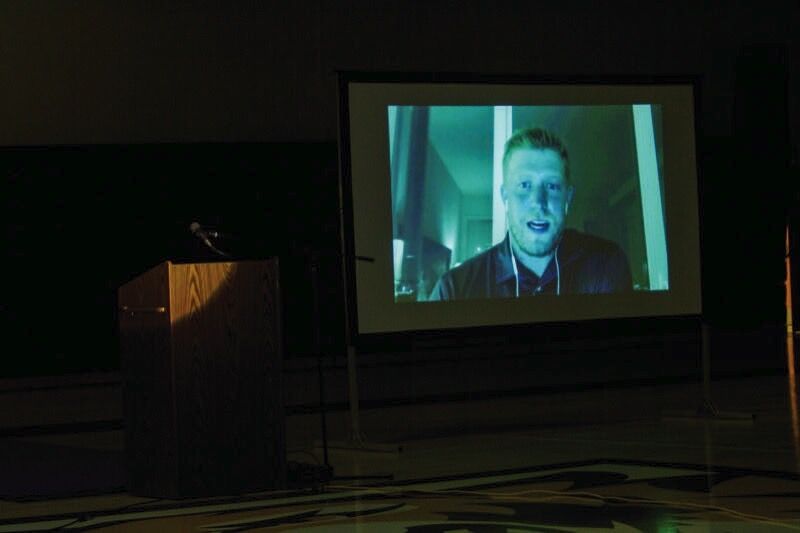 Liz Mathis thanked her family members — namely teachers — for helping her and others find success.

Some members of the Central DeWitt Hall of Fame class of 2020 attended Thursday night’s induction ceremony in person. Others gave their speeches over Zoom, and one attended in spirit.

But what bound them all together, they said, was a community that supported them and gave them the tools to become remarkable.

All inductees spoke Thursday except Dr. Donna Helble, who died in 2017 after an illness.

Those in attendance to honor Helble included Pat Henricksen, a fellow educator and friend.

“She’d come back to visit DeWitt and stay at their home,” Henricksen recalled. “I would call her and pick her brain. We’d go out for dinner and she started telling me all the things she did, and I’d listen, and then I’d steal them if I could. She was just a wonderful lady.”

Helble graduated from Central DeWitt in 1967 as the only child of Donald and Helen Helble.

Helble was inducted to the National Honor Society while in high school and participated in multiple extra curriculars. She became an educator and began teaching elementary-age children until 1988 when she began a stint at Winona State University in Minnesota. She made a lasting impression on the WSU community after serving on multiple school boards while also venturing into the community at large and serving with the American Red Cross, Big Brothers/Big Sisters, Rotary Club and the Winona County Cancer Society.

Her name also was included in Who’s Who of American Women, the International Who’s Who of Professional Business Women and Outstanding Young Women of America.

In July of 2018, after her death, WSU named a building in its education department after Helble.

The ceremony’s emcee and former Central DeWitt activities director Kurt Kreiter introduced Leah Washmon as a pioneer for girl’s golf, and her accolades speak to her devotion to the sport.

Washmon began swinging a golf club when she was around 5 years old, and that early childhood hobby turned into a lifetime of difference-making moments for the class of 1979 grad.

Washmon graduated after playing golf all four years. She attended Florida State, and upon her graduation, began a decorated career in the golf industry.

“I am proud to say I have helped people and trailblazed in the golf industry,” she said. “It’s been fun to make lives better through teaching golf.”

She operated The Golf Institute located in Dallas, Texas; Washmon taught more than 26,000 individual golf lessons in her career. She’s also a high school golf coach and has been voted Golf Coach of the Year by the Texas Association of Private and Parochial Schools.

“I’m pleased to be recognized as a pioneer for girls golf at DeWitt and for women in the golf industry as a whole,” she said in her address Thursday night. “I hope I can inspire others to do what they love.”

“Success doesn’t come without good teams,” said inductee Casey Kreiter as he addressed Thursday night’s crowd virtually via Zoom. Kreiter, who plays longsnapper for the New York Giants NFL team, was preparing for the Giants’ season-opening game that took place Monday night. COVID-related travel complications made it so he could not attend the induction in person, he said.

“When I look back at my time I remember being a young athlete,” Kreiter reminisced. “Being a sophomore on a state wrestling team was special. In 2007, (the football team) had a rocky start to the football year but finishing the year well, and then in 2008 having a dominant year and ending in a loss that I think still haunts my dad (Kurt) to this day in the first round of the playoffs.”

Kreiter, who has played on three professional teams as well as the University of Iowa and their large-capacity stadiums, said the crowds at Birney Field will always stay in his memory. The Saber fans, he said, are second to none.

“I remember going on away trips and wrestling meets and you could count on the 15-20 people who would be in the stands every single time. That was special and that meant a lot.”

Kreiter thanked his mom, Jenny, and Dad, who he considers his biggest role model, for their years of support.

Kreiter said the support system in DeWitt — from teachers, to coaches, to his family — helped elevate him to new heights. And, in some cases, keep him fed.

“Especially the cooks at Ekstrand who were willing to give me the secret spaghetti recipe so my mom could cook it at home,” he said. “That speaks to the community as a whole in DeWitt.”

A valedictorian in the class of 2001, Justin Petersen maintained a 4.0 GPA his senior year while whipping opponents on the wrestling mat.

Known for his lean physique and trademark glasses, “Pete” was a force to be reckoned with. The 103-pound grappler left Central DeWitt as the program’s all-time leader with 132 match wins. He’s a three-time Big Bend champion and said he appreciated support from the Sabers faithful along the way.

“Pound-for-pound, Justin was one of the toughest and strongest to ever wear a Saber wrestling singlet,” Kurt Kreiter said in his introduction.

“I was not the most athletic kid,” Petersen admitted in a pre-recorded address. “When it came to coordination, I could barely walk and chew gum at that same time. But my coaches promised me if I worked harder than my competitors and dedicated myself to the sport, I could be successful. And they were right.”

Petersen ended his wrestling career after setting multiple school records and is now involved in a successful investment banking career. He says life lessons gained while wrestling stick with him to this day.

“Whenever I have a setback, I can hear my coaches’ voice in the back of my head reminding me to pick myself up and get back to work,” he said. “Wrestling taught me the importance of community. Anyone who has ever succeeded in wrestling has done so with strong support from coaches, teammates and parents all working behind the scenes. I would have not been successful without the entire saber wrestling community.”

Liz Mathis says her life has been filled with impactful educators.

Her grandmother, Mary Gannon Rumann, began teaching in a one-room classroom in 1916.

“She was a strong woman in a difficult time.”

Mathis’ mother, Mary Jane Busselot Rumann, also was a schoolteacher. She taught in a one-room schoolhouse just north of DeWitt.

“She was young and hopeful and determined to make a difference,” Mathis said.

During World War II, Mathis’ mother helped the war effort by working at the Rock Island Arsenal as a teacher, and later as a nurse delivering babies and setting broken bones.

“This honor is not about me, it’s about them,” Mathis said. “It’s about teachers, and the path they paved for me.”

Mathis’ sister — also named Mary — is a teacher as well.

Mathis credited countless teachers at Central DeWitt with helping her carve out a successful career that included two full terms in the Iowa Senate, television journalism, and currently as communications officer at Four Oaks, a children’s welfare agency in eastern Iowa.

“I am truly humbled by this recognition and am appreciative of school leadership for organizing this ceremony,” she said. “I would have not been successful without the help of teachers.”

When Ryan Scheckel found out he was being inducted into the hall of fame, he and his family were in quarantine.

“I ran upstairs and found my wife Jill and said ‘Hey, this fall I am going to be inducted in the hall of fame in DeWitt.

“Her exact response was, ‘For what?’”

That reaction got Scheckel thinking: What was the reason?

“At my time in DeWitt, I wasn’t the best athlete or an all-star,” he said. “When Coach (Kurt) Kreiter called earlier this year and told me I was going to be in the hall of fame, I went through the normal emotions. I was very excited, and memories started coming back.”

However, Scheckel’s post-high school career is perhaps where he truly shined.

He played basketball, ran cross country for two years, and was a four-year track and field standout at Mount Mercy College.

He was well-decorated as the school’s assistant track and field coach as well.

In his address Thursday night, Scheckel said his time in DeWitt helped him become a successful coach.

“For me, it was all about the environment,” he said. “I grew up in an environment that allowed me, encouraged me, prepared me and ultimately expected me to be successful. And it’s my opinion that a successful person or coach does not get there alone. They learn from others.”

The 2009 boys track and field team didn’t have a star. Sure, its members were athletic. But what ultimately helped the squad win the state championship that year was its depth.

Adam McDonnell, whose performance in the discus and shot put at that 2009 state meet helped propel the team to victory, represented the team at the podium at the induction ceremony.

“In a society where it is too easy to be all about me, we wouldn’t be here today if it wasn’t for every individual on this team,” he said. “Everyone has a role and played a vital part on this team. We pushed each other every practice and every meet.

“And, our coaches believed in us and invested in us when it mattered most.”