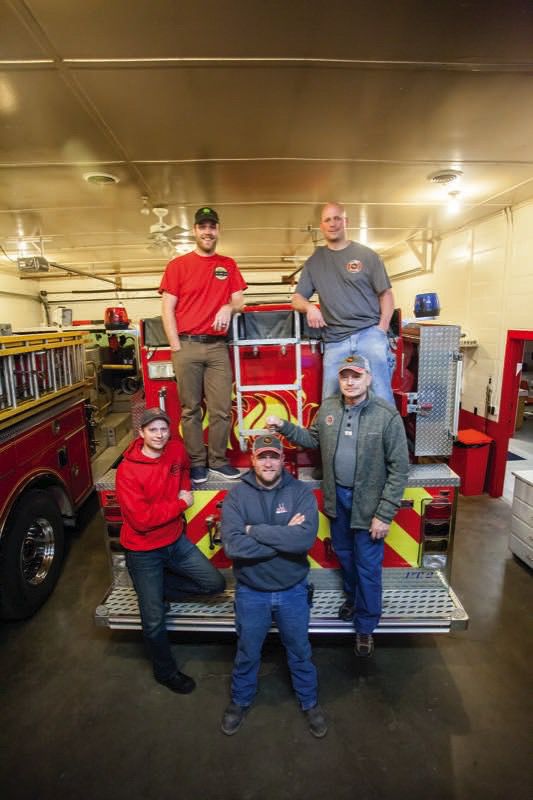 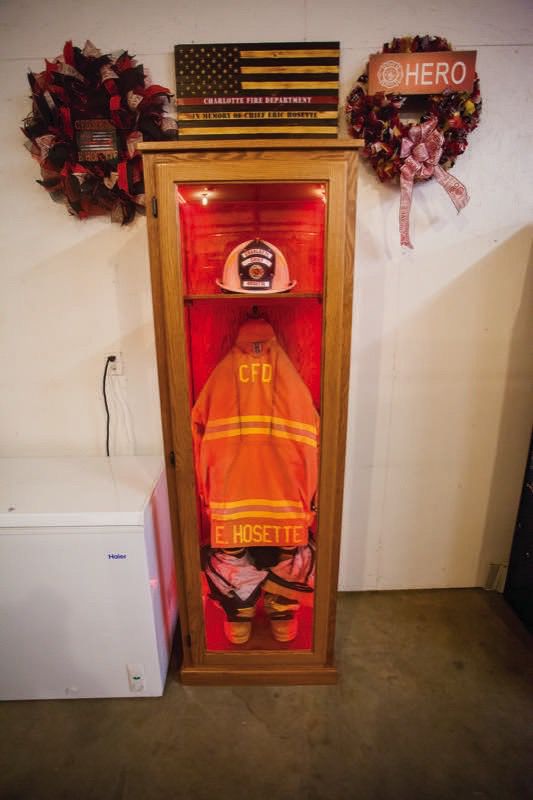 This memorial in the Charlotte Volunteer Fire Department’s truck bay honors Eric Hosette, who died while battling a fire on Jan. 5, 2019. 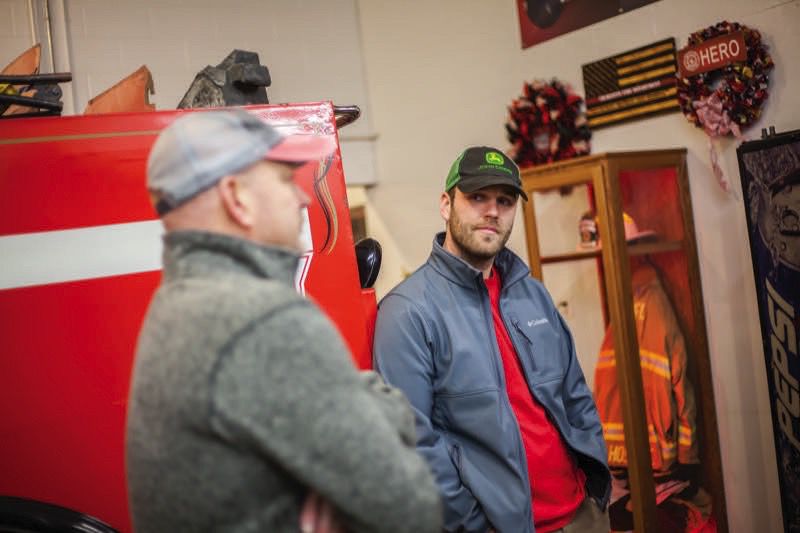 One of the department’s newest members, TJ Burken, glances over at his dad, Brad, who spent the past year as the interim fire chief. 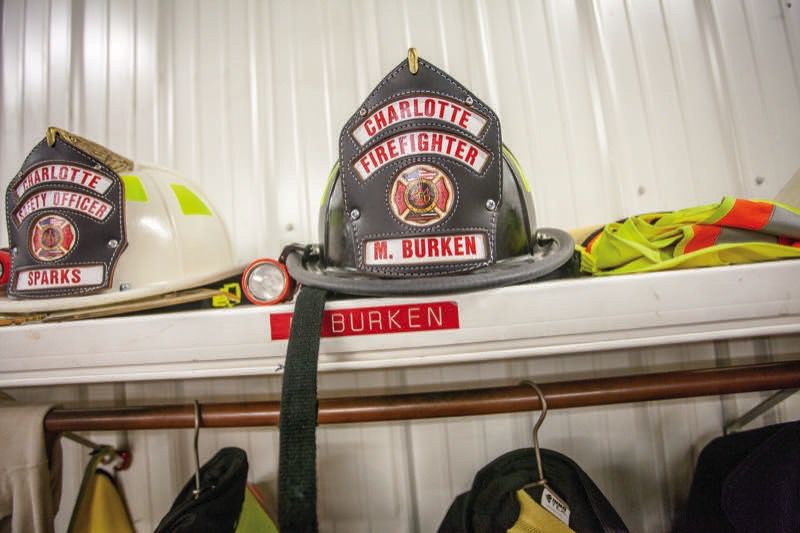 Fire-fighting equipment belonging to volunteer Matt Burken sits atop a shelf at the Charlotte firehouse.

This memorial in the Charlotte Volunteer Fire Department’s truck bay honors Eric Hosette, who died while battling a fire on Jan. 5, 2019.

One of the department’s newest members, TJ Burken, glances over at his dad, Brad, who spent the past year as the interim fire chief.

Fire-fighting equipment belonging to volunteer Matt Burken sits atop a shelf at the Charlotte firehouse.

When members of the Charlotte Volunteer Fire Department were asked to characterize Eric Hosette, it was evident that a painful memory had been triggered.

By all appearances, morale again is high for a 25-member fire department that was blindsided by tragedy a year ago. On Jan. 5, 2019, Hosette was thrown to his death by an explosion while he was battling a fire at the Archer Daniels Midland grain-processing plant in Clinton.

Hosette’s death came a mere five days after he had been named Charlotte’s fire chief. The 33-year-old also was a lieutenant in the Clinton Fire Department.

Another area firefighter, Adam Cain, who was positioned near Hosette at the time of the blast, was seriously injured. He spent two weeks in the intensive-care unit at the University of Iowa Hospitals and Clinics.

Cain and his father, Kevin, who is the fire chief in Goose Lake, are not strangers to Charlotte firefighters. They have worked side by side many times.

“It was a triple-whammy for us, obviously with Eric, and also with the Cain,” said Brad Burken, a senior firefighter in the Charlotte who served as the interim fire chief for the past year after Hosette’s death.

Cain, 24, still was battling the injuries he sustained when he returned to light duty for the Clinton and Goose Lake fire departments this past spring.

A huge void remains in Charlotte.

Because Hosette was the grandson of Charlotte Fire Chief Richard “Dick” Grimm, who ran the department for nearly three decades, the fire station had been Hosette’s “second home” since he was a toddler.

It’s been said that Hosette was born to be a firefighter. His peers say he was extraordinarily committed to his profession.

But firefighting didn’t completely define him. Hosette didn’t have to be fighting a five-alarm fire to seek out ways to help his fellow man.

Several people had a story about a time when they desperately needed someone’s help, and it invariably was Hosette who came to the rescue.

“Imagine that you have a gun to your head and you can make only one phone call; if the call is answered, you live, and if they don’t answer, you die,” said firefighter Justin Butt, explaining what Charlotte-area residents knew to be true: Whatever the situation, people could rely on Eric Hosette to answer the call for help.

In the weeks and months following Hosette’s death, 10 new firefighters joined the ranks in Charlotte. That’s a healthy influx for a town of about 400 residents.

“We were down to 15 members for a while, but 25 is a good number,” Burken said. “I think Eric’s death opened some people’s eyes.”

There were several newcomers who already were considering whether to join the department before the tragedy. Brad’s son, T.J., fits into that category.

“There was no better time to join the department,” T.J. said. “I think (Eric’s death) brought more attention to what a volunteer fire department does.”

The camaraderie of the firefighters is something that persuaded him to join.

“I watched as my friends participated in the memorial services for Eric, and I knew that I wanted to be a part of that,” he said. “I think people realized that the department had lost a lot, and they would ask, ‘What can we do to help?’ Well, they can help by joining the department.”

Butt also had considered joining. He had some first-responder training about 10 years ago while he was working for Lyondell Basell in Clinton.

He had a pretty good excuse for not immediately getting involved because he was busy building his meat-processing business, Charlotte Locker, as well as establishing a retail outlet, Butt’s Meat, in DeWitt.

“And now I look back, and I just wish I had gotten involved the first day I bought The Locker,” he said. “I love the s--- out of it.”

Long before someone faces the potential prospect of racing into an inferno, there will be a lot of training.

Many of the new members have just started their Firefighter I courses for those who want to be volunteers in Iowa. The courses entail 160 hours of instruction. After that, applicants must pass written and performance examinations to gain certification.

“It’s a big commitment,” Brad Burken said. “It’s like spending eight hours a day for a month in a class.”

Ryan Winkler, who is affectionately referred to as “Stork” by his peers, has gone much further with his training. Winkler is a full-time firefighter for the Clinton Fire Department and a volunteer in Charlotte.

“You have to have one year of paramedic training, which is a year of college, then there’s a whole lot of certifications,” he said. “One thing that’s different in Clinton is the industrial fires. Probably the biggest difference is the volume. (Clinton) is running about 4,500 calls per year.”

When T.J. Burken was on his first call — a barn fire — Kyle Burke, who became the fire chief on Jan. 1. advised T.J. Burken to stay outside and wear an air tank.

An air tank is compressed air, and it takes a little getting used to.

“You want to be in shape,” Winkler said. “It’s a strain on your respiratory and cardiovascular systems. There’s a lot of testing that people have to go through to be able to be cleared for a system like that.”

Volunteer firefighters aren’t beholden to a bunch of health and fitness regulations. Instead, it is paramount that everyone knows their limitations and their comfort level.

“We do have guys that — from a physical perspective — know that they aren’t going to want to put on an air tank,” Burke said. “We’ve got guys who come down here who want to drive the truck or want to drive the tanker or run the pump. We need guys like that, too.”

“This truck might go to and from a fire location six times,” Butt said. “Why take a guy like ‘Stork’ who has tons of training experience and have him driving back and forth in the truck. Those people who can’t put on an air tank and crawl through tight spaces, they can drive a truck.”

On Jan. 5, 2019, no one thought there was the potential of an explosion that would kill one firefighter and wound another. That’s the thing. When fire is involved, all bets are out the window.

“It’s the unknown,” said Burke, answering a question about the No. 1 danger for firefighter. “It’s not knowing exactly the conditions of the inside of the burning structure.”

Then Burke revised his answer slightly.

“It’s not even the fire,” he said. “It’s alongside the road, where a vehicle could come along and hit someone.”

Brad Burken said he’d be willing to bet that more people die from medical conditions than from being injured by the fire. Although in his 60s and facing the prospect of two artificial knees, he still doesn’t plan to slow down much.

“I don’t need to be doing this anymore,” he said. “I do it because I like to help people. Usually we’re trying to save someone’s property or pulling someone with a broken leg out of a ditch. It can be worse than that, too.”

Butt said he just wants to help his neighbor.

“If you think about it, most of the people that we’re going to be trying to help during a call is someone we  know,” he said.

From their perspective, it is what it is. There’s just no getting away from danger.

“A lot of people ask me, ‘Why do you risk your life to do this — and jeopardize your family — for nothing?’” Burke said while shrugging. “I don’t know, it’s what we do.”