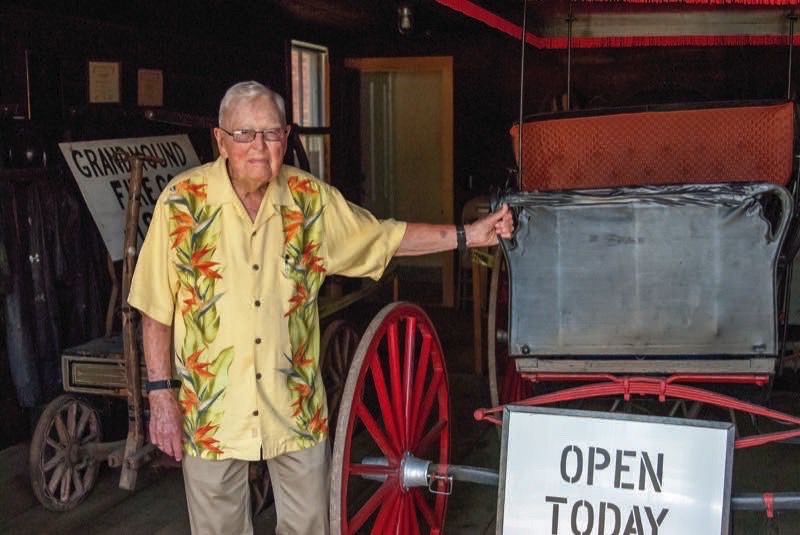 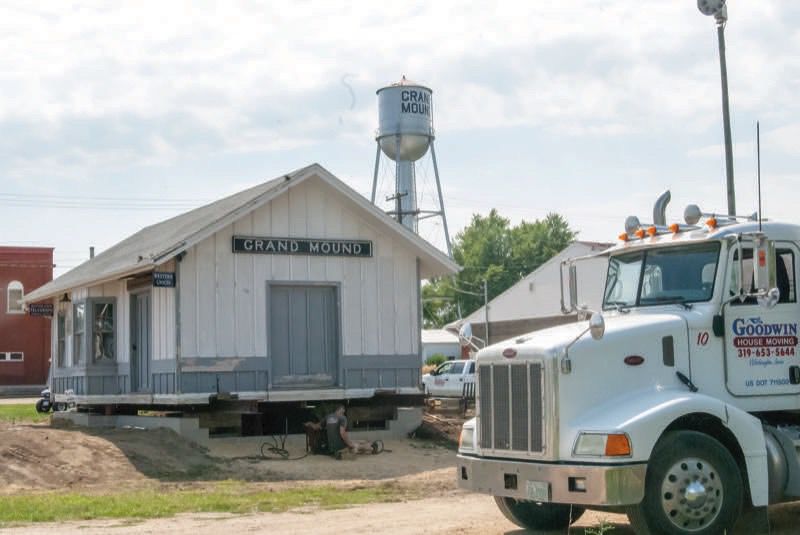 Don Kent sat by himself in a golf cart chomping on a bag of popcorn while a group of workers scurried around him.

If one didn’t know any better, it would seem as though he wasn’t all that interested in what was taking place, belying the feelings of nostalgia that must have been raging underneath his stoic glare.

That’s because workers were moving something near and dear to his heart to the intersection of Clinton and Smith streets in Grand Mound — next to the train tracks.

It’s a replica of an old train depot that he had built about 26 years ago on land he owned a couple miles outside Grand Mound.

But why did he build a train depot?

His job as a bookkeeper and an accountant as well as his love of baseball — playing and coaching — consumed a lot of his time as a younger adult. When he approached retirement, he began collecting things after the old depot in Grand Mound closed.

“I collected all this stuff, and it was overwhelming my wife (Betty, who died in 2008) and our house, and she just suggested that I build something to put it in,” Kent said. “I would call it a ‘buy signal.’ That’s when your wife says it’s OK to go buy something, and you better do it fast before she changes her mind.”

Kent built a depot that’s now filled with railroad-related items, including photos, a telegraph, a potbellied stove, an antique railroad bell, an old desk and much more. He said one of the reasons he wanted it to be relocated to Grand Mound is because it will be in a more accessible for tours.

Kent, a 96-year-old resident who has called Grand Mound home for 80 years, is old enough to have experienced firsthand the vitality of the railroads before automobiles became ubiquitous.

While trains have maintained a mystical place in the imaginations of countless Americans over several generations, train depots likely have not held the same sway.

Kent is different in that respect. He was raised in a train depot — literally — in Monmouth, where his father was a station agent. In this case, the declining status of the railroads actually was beneficial.

“We lived in a house without plumbing and central heating,” Kent said. “The waiting room of the depot wasn’t being used as much anymore, and he cordoned off half of it for us.”

The depots were the center of trade and communications in the early 20th century.

“You know, back in 1900, the only source of news was the telegraph,” he said. “There was no telephone. So the depot was where they got the news.”

He even used $10,000 of his own money to help pay for moving the depot to its new location. So just how much money has he spent over the years for historic-preservation efforts?

“I don’t want to talk about that,” Kent said with a laugh.

He admits to being encouraged when hundreds of people flocked to see Steam Engine Big Boy No. 4014 in Wheatland.

“The good thing is that people are starting to learn (that history is important),” Kent said. “I’ve never seen so many people in Wheatland.”

But the move cost a lot more than his $10,000 offering. A deal had to be worked out for the land, and the firefighting department came through. Then there was the matter of building a foundation for the depot’s new home in Grand Mound. A special company had to be hired to move the depot.

He praised other organizations for believing in his vision.

“You want to let them know that you really believe in it, that you’re committed to it,” Kent said. “And then I had all these people behind me — the Lincoln Highway Foundation and Hometown Pride, the firefighters, the city …”

Last week, workers from Goodwin House Moving, based in Washington, Iowa, showed up two weeks early to more the depot. Goodwin had never been able to give the Kents a specific date when the move would take place.

“Everything is ahead of schedule,” Don Kent quipped with a smile.

Speaking of on schedule, he pointed to a chalkboard that listed three train arrivals and three departures on a November day way back in 1914.

“I was looking at that the other day,” said Steve Kent, Don’s son and a retired investor. “It’s just amazing that a town in Iowa had three trains coming and going in one day.”

To further illustrate the impact of the railroads, it probably has occurred to a few people that the towns along U.S. 30 seem to be equally spaced.

“If you notice that all of the towns are

Calamus, Wheatland,” Kent said. “Well why did that happen?

“It turns out that farmers could go about 2½ miles with their produce, and that’s about as far as they could go,” he continued. “And every town had a ‘section gang’ of probably 10 people, and they would work 2½ miles west and 2½ miles east out of town. So, a farmer coming out Grand Mound, would meet the DeWitt gang halfway, and that’s why the towns along the railroad are all about 5 miles apart.”

Don Kent still owns part of the land on which the depot used to sit, but he also passed along some of it to his son Steve.

“Part of the sale agreement is three things,” Steve Kent said. “I guess the depot was here, so I had to, you know, kind of take care of it. And (Dad) could fish anytime he wanted to.”

And the third item?

“That he be allowed to mow the grass,” said DeAnn (Kent) Larson, finishing the story. She is Don’s daughter and a retired music educator who is living in Ridgeway, Wisconsin. “That kind of typifies him. He’s a selfless man.”

Trains have been a big part of any travel plans for the Kents, she said. To celebrate his 95th birthday, the family took its first Amtrak trip. They went to Montana.

Even her birth was the focus of another train-related story.

“When I was born, the story is my two older brothers were just inconsolable that they now had a sister,” said Kent Larson. “So he went out and bought them a model train to make them feel better.”

And airplanes are big in the Kent family, too. Don was a pilot for the U.S. Army who was stationed in Burma and flew more than 100 missions in Asia over a two-year span.

But he said that was enough flying as far as he was concerned.

“I flew the Thunderbolt,” he said. “It was a beast of an airplane and it was big, strong, heavy. We always felt like if, if worst came to worse and we had to bail, you could run that right through a house and make it.

“And so you get back to the States,” Kent added. “And all you could afford to fly would be a little puddle jumper, which if it landed and hit a rock, it would flip over on you.”

He’s had an interesting life, that’s for sure. But there still is one thing that doesn’t make sense: Why does Don’s name come up in so many conversations — official and otherwise?

“He is just a very personable guy,” Larson added. “He gains new friends wherever he goes.”

The recent receipt of a $22,605 grant from Clinton County Development Association will put a model railroad in one of the community’s most popular attractions, the Clinton Sawmill Museum.

The museum also recently received funding from the Joyce Foundation, according  to Museum Director Matt Parbs.

“With the CCDA grant, we’re looking at using that for our Chicago Northwestern model railroad display,” Parbs said.

At a fundraiser that drew roughly $40,000, Parbs said, “It really is a reflection of what I think a museum should be in any community.”