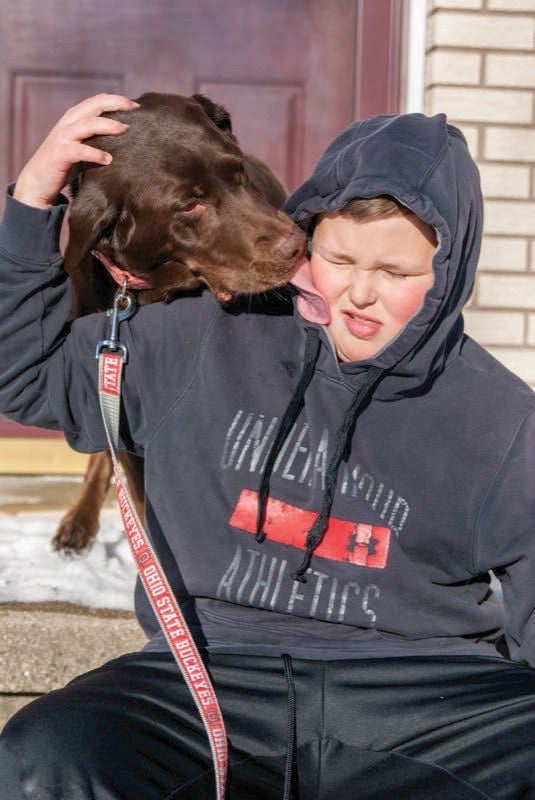 Getting a smooch from Brutus, a high-spirited Labrador, is Logyn Dingbaum, of DeWitt. The Central DeWitt middle-schooler loves helping local families care for their animals. Brutus’ owners, Mike and Bobbi Macumber, of DeWitt, call on their neighbor, the 13-year-old Dingbaum, whenever they need someone to take care of Brutus and their other Lab, Riley. 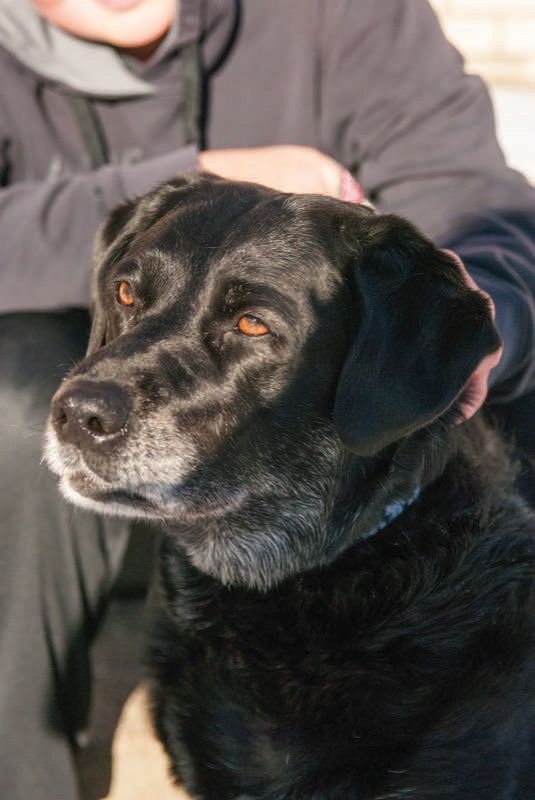 Riley, a Labrador, sits patiently as Logyn pets him.

Getting a smooch from Brutus, a high-spirited Labrador, is Logyn Dingbaum, of DeWitt. The Central DeWitt middle-schooler loves helping local families care for their animals. Brutus’ owners, Mike and Bobbi Macumber, of DeWitt, call on their neighbor, the 13-year-old Dingbaum, whenever they need someone to take care of Brutus and their other Lab, Riley.

Riley, a Labrador, sits patiently as Logyn pets him.

As two rambunctious Labradors sniffed their way around Matt and Heather Dingbaum’s kitchen and living room in their DeWitt home, their son, 13-year-old Logyn Dingbaum, couldn’t seem to help but smile.

The dogs — Brutus and Riley — don’t belong to the Dingbaum family, but rather their neighbors, Mike and Bobbi Macumber.

But whenever the Macumbers need someone to look after their beloved pets, they know exactly who to call.

“It’s nice, because I know if I or my husband even just have a long day at work, I can always message Logyn and he’ll take great care of them.”

Asked if he has a favorite between the two, Logyn grinned and gave it some thought.

“I love how active they are, how hyper they are,” he said. “They’re fun to play with. I guess if I had to pick, I’d say Riley. Riley is more laid-back … Brutus is pretty high strung.”

The eighth-grader at Central DeWitt Middle School keeps himself pretty busy. He plays the trumpet in the school band, was in the school play, loves to fish and target-shoot, go to movies, hang out with his friends and do various activities with his church youth group.

But he also loves to take care of people’s pets.

Logyn has worked with five different local families so far, and is looking to help more.

He has cared for dogs, cats, rabbits and fish. He’s even looked after animals that require medication and special care.

Logyn also has been a devoted volunteer at the Scott County Humane Society since 2017.

“Logyn wanted to take care of some animals, and the humane society had placed an ad in the paper that they were looking for dog-walkers,” Heather related. “So, Matt reached out, and he and Logyn had to take a few weekend classes before they could start volunteering.”

Logyn and his dad take the dogs out of the kennels to play and, if it’s nice outside, take them for walks. They also clean the kennels if needed, and they have participated in a Pitbull parade to raise awareness about that breed of dog.

According to his parents, Logyn’s love of animals began when they lived on an acreage outside of Mason City.

As time went on, Logyn’s love for animals — of all kinds — grew.

“We have had pets in the past like cats, dogs, hermit crabs, fish and horses,” Heather noted.

But, the mother of five said that when they discovered one of their children had dog and cat allergies, they agreed it was best not to have any pets in the house.

Logyn is now able to get his animal fix by helping other families care for their pets, which is something his parents truly admire about their son.

“It makes us proud that he’s found something he enjoys and takes pride in and that he is successful with,” Heather related. “We are excited to see how he’s gained confidence and become more independent and mature because of the different responsibilities and challenges he’s taking on.”

Heather and Matt believe it’s Logyn’s free spirit and carefree personality that draws animals to him and vice-versa.

Taking care of animals always has come easy to him, and Logyn becomes more motivated with every opportunity that comes his way.

Ask Logyn if he has a favorite animal, and he will tell you “dogs.”

Ask him what breed, and not only does he have an answer, but he also has a good reason for his answer.

“Pugs,” Logyn said. “Because of how active and fun they can be and how they show compassion to others.”

In fact, Logyn already knows what his future will entail: He will live on a lake or river in Montana, have some fish and will have one Pug and one Huskie.

Logyn hopes to pursue work in environmental science so he can work with animals and help preserve their habitats.

He also is interested in being an activist for anti-poaching efforts as another way to help animals.

“Logyn has always been caring toward people and animals both,” Heather shared. “He gets along with all types of people and is happiest when he’s around his friends and family. He’s very easy-going and doesn’t get worked up about anything. He’s always happy and strives to make people smile and laugh.”

Anyone who is looking for someone to care for their pet(s), they can call or text Logyn at (563) 210-3135. References are available upon request.

We are now in ELDRIDGE!