Leo Croce (back row, third from the right) was the smallest guy on his championship baseball team, but he still was the team’s catcher, a position usually reserved for one of the biggest players on any baseball team. That’s because he was deemed the only one capable of catching the bullets thrown by the man standing left of him. The pitcher is alternatively referred to as “Pat” and “Patterson” in correspondence between him and the military official at the far-right, who is believed to be Sgt. Charles F. Buss, of Maywood, California, the team’s coach. 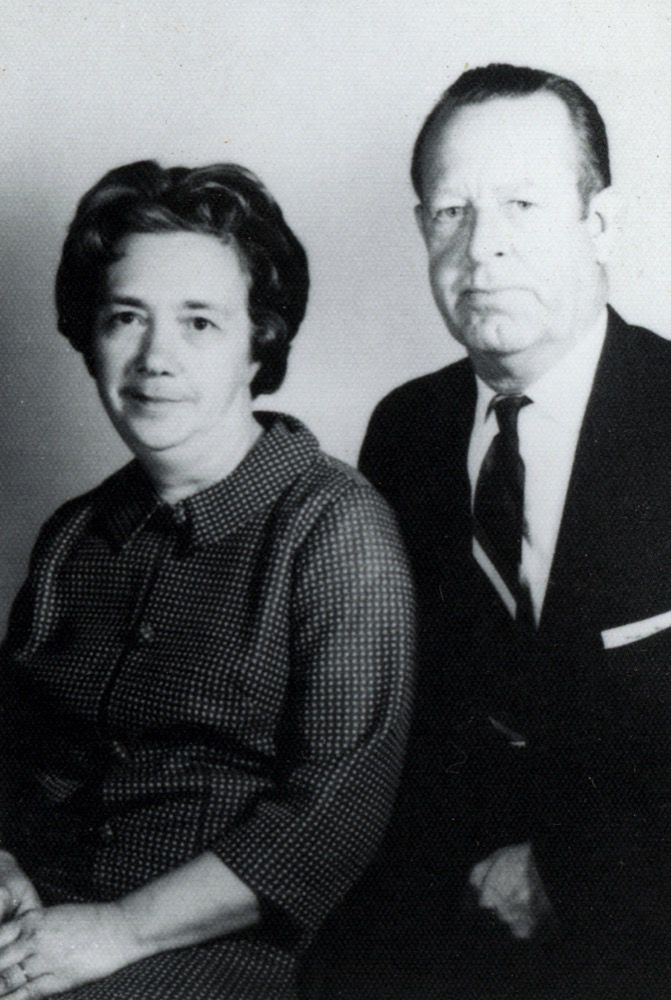 Croce and his wife, Gladys

Leo Croce (back row, third from the right) was the smallest guy on his championship baseball team, but he still was the team’s catcher, a position usually reserved for one of the biggest players on any baseball team. That’s because he was deemed the only one capable of catching the bullets thrown by the man standing left of him. The pitcher is alternatively referred to as “Pat” and “Patterson” in correspondence between him and the military official at the far-right, who is believed to be Sgt. Charles F. Buss, of Maywood, California, the team’s coach.

Croce and his wife, Gladys

And players on opposing baseball teams merely amused him.

“He was a pit bull,” said his great-grandson, Justin Scott, who has tirelessly researched his ancestor.

Scott remains in awe of Croce’s transformation from a brash kid to a humble man who spent five decades advocating for those in need of food and shelter, particularly the elderly.

“I was always told my great-grandpa was a war hero,” Scott said. “He was more than that. He was a soldier who fought valiantly in the war, and he was a soldier back home working to improve the lives of others.”

On Sunday, Nov. 3, Leo Croce will be inducted into the Jackson County Historical Society Hall of Fame during its Heritage Day events at the Fairgrounds beginning at 3 p.m.

“He was generous and passionate about helping people,” said his daughter, Monna Cleary, who along with her twin sister, Donna, were Croce’s oldest children. “I wish there were more people like him.”

Croce apparently didn’t set out to be a pillar of society. Before the Great Depression, he was involved in bootlegging activities, according to Scott.

During the Depression, he landed a job with the Civilian Conservation Corps (CCC), which was a major part of President Franklin D. Roosevelt’s “New Deal” that provided manual-labor jobs related to the conservation of natural resources. It is estimated that more than 3 billion trees were planted as part of corps efforts to curtail erosion.

An estimated 3 million men worked for the corps from 1933-42. Some of Croce’s writings suggest he was grateful to the government to have that job during the peak of the Depression.

One of Croce’s fondest memories was when his CCC team won a Seventh Army Corps Area baseball tournament that featured teams from seven states. The team officially was called Company 772, but players called themselves the “Rog Rifters,” a thinly veiled jab at the unidentified camp leader’s inability to pronounced the letter “L.”

The catcher on a baseball team usually is one of the bigger players for various reasons. But Croce was the catcher on this team. He was blond-haired, blue-eyed, somewhere between 5-foot-3 and 5-foot-5, depending on who was asked, and around 120 pounds soaking wet, so to speak.

He exchanged letters with a Sgt. Charles F. Buss, of Maywood, California, who appears to have coached the baseball team, praising him for “making up for his small size and weight with GUTS and KNOW-HOW,” Buss wrote.

Croce appeared to be the only player on the team who was able to catch the supersonic fastballs and exploding curve balls from the team’s ace pitcher — someone referred to alternatively as “Pat” and “Patterson.” Croce posted a perfect fielding percentage throughout the tournament.

A sports reporter attending the championship team couldn’t help but notice that Croce was “helping” the opposing hitters by yelling “swing” with the ball already in his mitt. To add insult to injury, he also laughed at players who swung at and missed Patterson’s curve ball by several feet.

The war was raging in Europe, but Croce was 29 years old, with a wife and five young children. Despite pleas from his wife, Gladys, and “even the lady in charge of the draft board,” he joined the U.S. Army.

“I couldn’t stand not going,” he said in an Eastern Iowa Bizzy Bee article penned by Tom Ryder, of the Maquoketa Sentinel-Press, for the week of March 16-22, 1985.

After 16 weeks of infantry training, he soon found himself at the front in eastern France.

In early March of 1945, his outfit, the 394th Regiment had just punched through the Siegfried Line, a line of German defensive fortifications between France and Germany. The unit was looking for some rest when the 394th was ordered to the Ludendorff Bridge on the Rhine River some 40 miles away.

“I saw Patton often,” Croce quipped of the infamous U.S. general. “He was a real blood-and-guts man … your blood and his guts.”

The Germans had conducted a scorched-earth campaign that was having the desired effect until the 9th Armored Division found the Ludendorff still standing and Germans frantically trying to cross it.

So began the Battle of Remagen, Germany. The river could have been turned into a giant defensive moat if that last bridge also had been destroyed. The Germans flew the first jet aircraft the world had ever seen in an attempt to blow the bridge. The P-51 Mustangs and P-47 Thunderbolds could not catch the fighter-bomber.

On the ground, it was a tense military standoff. On March 7, Croce and about 100 men were assigned a daunting task: To cross the Ludendorff — a 1,000-foot-long railroad bridge over the Rhine — while German-fired 88s (artillery) rained down around them.

“It scared hell out of us,” Croce said. “It seemed like it took two days to get across, but I guess it was only a matter of minutes.

Despite seemingly perpetual bombing raids, the Germans did not succeed in destroying the bridge until 10 days later.

But the damage was done. The bridge provided the Allies’ their first “beachhead” east of the Rhine during World War II. Its capture was credited with preventing thousands of U.S. casualties and hastening the end of the war, Croce said.

The bridge and river at Remagen reminded him of the former Mississippi River bridge at Savanna.

“It was very comparable, the bluffs and all,” he said.

After the war, Leo and Gladys Croce, with Donna, Monna, Maxine, Billy and Janice in tow, moved to Canton, where he briefly owned a general store while Gladys gave birth to her sixth child, Butch (Leo). The family moved to Maquoketa, where the elder Leo began working as a butcher at a meat market and where Gladys gave birth to their seventh and final child, Wendy.

“He believed that family and health were the only things that truly mattered,” Cleary said.

Croce then started working in the foundry in the molders department at Clinton Engine Works, and he eventually became the president of the union representing the foundry. He went on represent the union for more than 20 years.

Croce became increasingly involved in community affairs. He was way ahead of his time in advocating for universal health care. He also was a staunch advocate for affordable housing, especially for the elderly.

“He liked his politics,” Cleary said. “He could talk for hours and tell stories.”

He was the charter member of the Maquoketa Housing Authority, and he also helped to launch the River Valley Community Action Program, the forerunner to Operation: New View and Maquoketa Community Services.

“He saw so much suffering during the war,” Cleary said. “I think he dedicated the rest of his life to helping others.”

That’s the legacy Croce left behind when he died of cancer on July 22, 2000, in Maquoketa at the age of 85. All of his children are still living, and with most of them residing in the Maquoketa and Delmar areas.

“He never let anyone down,” Cleary said. “He never put himself ahead of anyone else.”

Partly cloudy this evening with more clouds for overnight. Low 58F. Winds SE at 5 to 10 mph.

Partly cloudy this evening with more clouds for overnight. Low 58F. Winds SE at 5 to 10 mph.