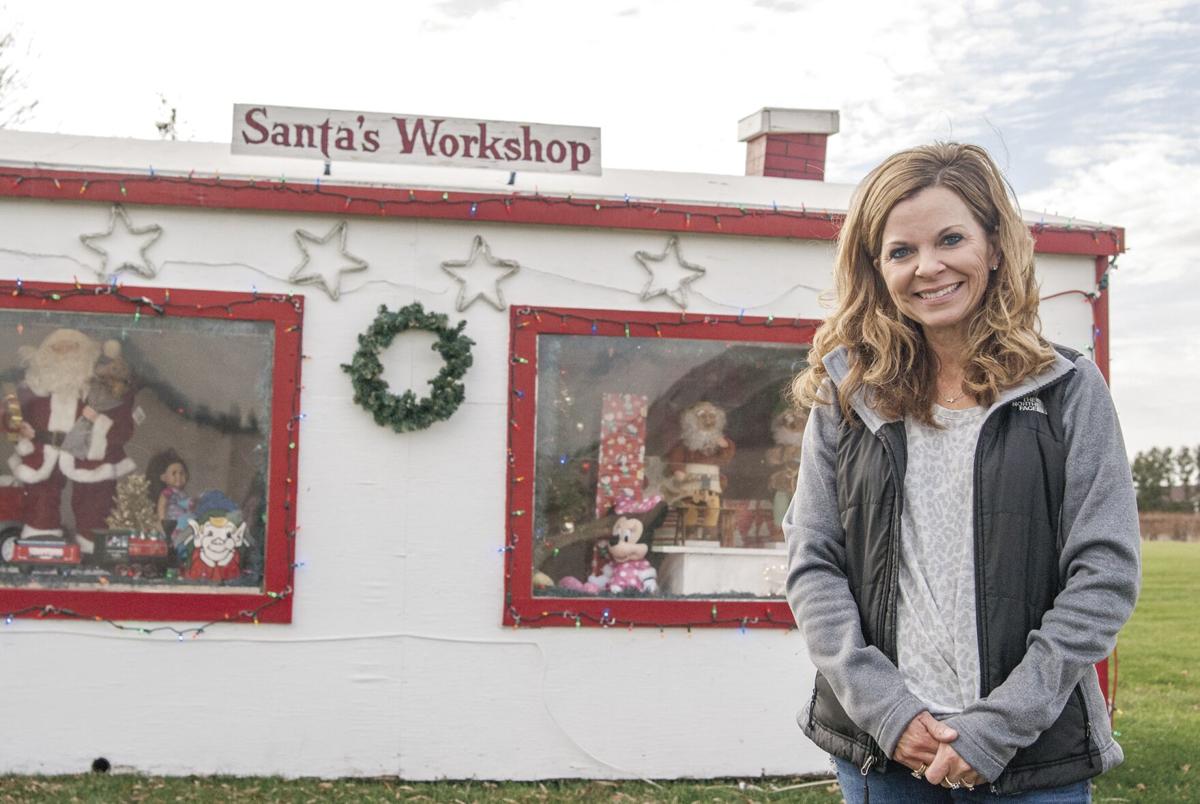 Carey Arndt, of DeWitt, and proprietor of TYCOGA Vineyard and Winery, together with her family, is keeping the beloved Rock family Christmas display tradition alive. Carey and her husband, Ben, took over setting up the display at their rural DeWitt home from Roger and Mary Oltman, of Grand Mound. 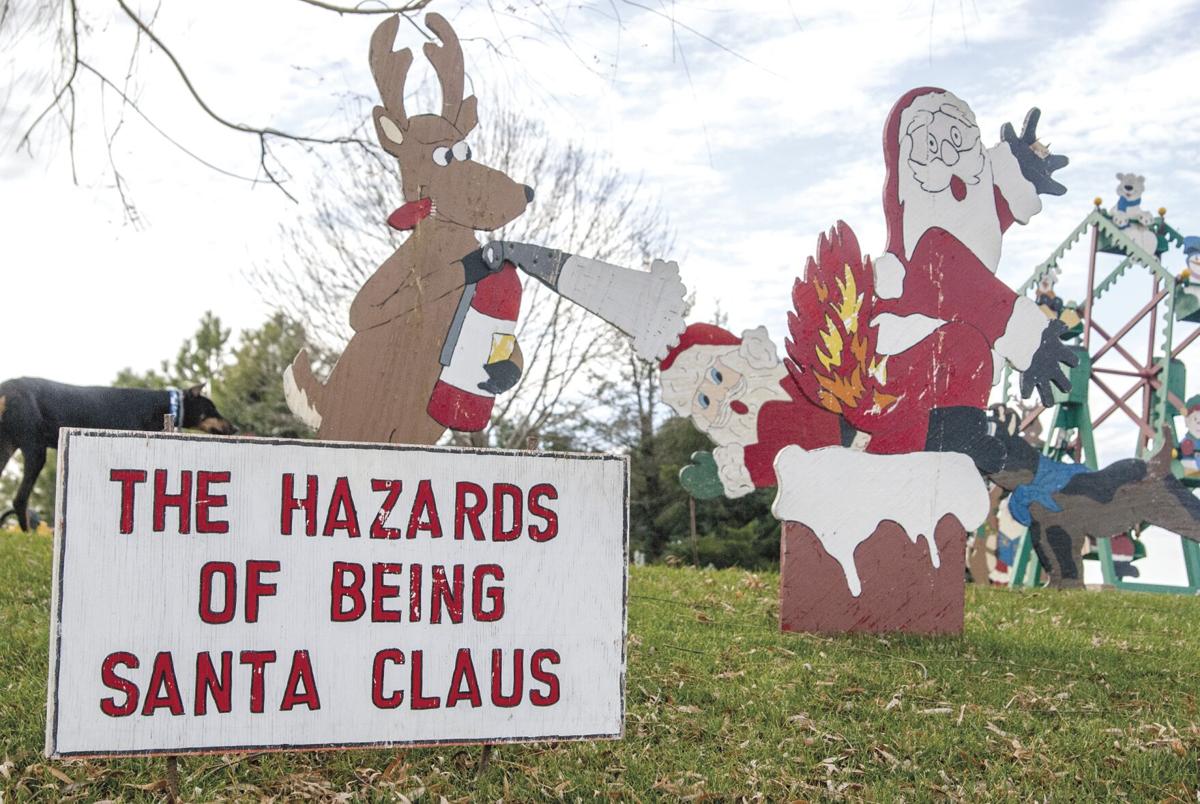 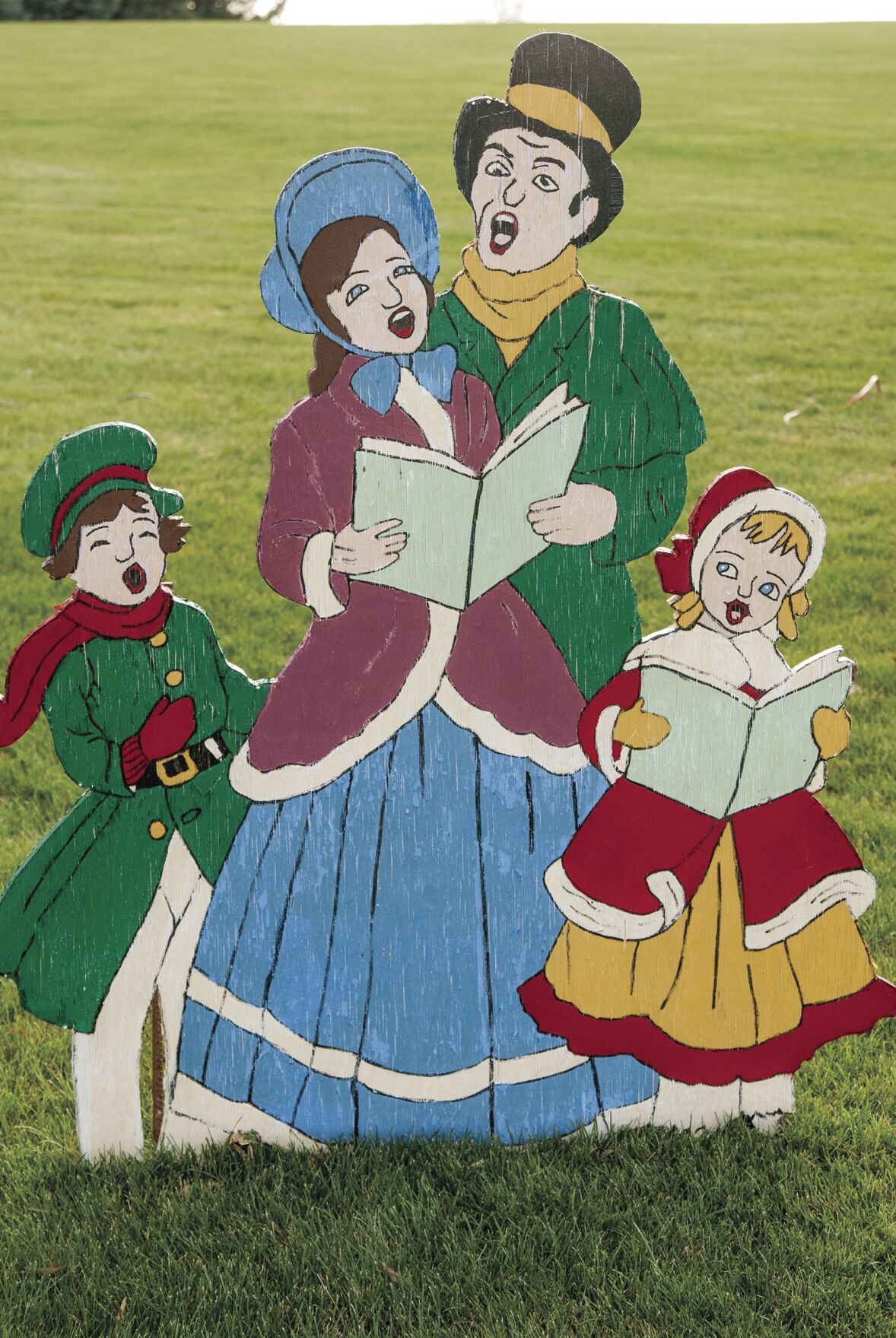 These carolers are one of the original pieces of the Christmas display, which was created by the late Larry and Marilyn Rock in the 1980s.

Carey Arndt, of DeWitt, and proprietor of TYCOGA Vineyard and Winery, together with her family, is keeping the beloved Rock family Christmas display tradition alive. Carey and her husband, Ben, took over setting up the display at their rural DeWitt home from Roger and Mary Oltman, of Grand Mound.

These carolers are one of the original pieces of the Christmas display, which was created by the late Larry and Marilyn Rock in the 1980s.

Carey Arndt always has loved Christmas, and decorating for it always brings happiness to her heart.

She said to be able to spread some of that holiday cheer in a year that has been daunting, at best, feels especially good.

It’s also a privilege, considering that while Carey and her family are sharing lots of joy, they simultaneously are continuing a beloved area tradition as well.

Carey and her husband, Ben, of DeWitt, who also are the proprietors of TYCOGA Vineyard and Winery, have inherited the famous Rock family Christmas display.

“We had seen the display in the past, back when it was in Grand Mound and then again a time or two at the Oltmans (Roger and Mary),” Carey related. “We absolutely loved it then when our children, Tyler, Courtney and Gabe, were little.”

A long-time admirer of the festive presentation, Carey said in February she reached out to its previous owner, Roger Oltman. She wondered if he was ready to pass the proverbial torch to someone else.

At the time, Oltman said he still was happy to keep it going at his rural Grand Mound home. However, just two months later, Oltman called Carey to say he’d changed his mind and asked if she and Ben still were interested in carrying on the treasured Christmas custom.

Of course, she said yes.

In July and August, the Arndts began the process of moving the numerous parts of the display from Grand Mound to their home. They spent September and October using paint to touch up some of the pieces.

Gift that keeps on giving

The display originally was created in 1987 by the late Larry and Marilyn Rock, of rural Grand Mound.

In an interview with The Observer in November of 2011, Marilyn admitted they had no idea just how popular — not to mention, immense — their display would become.

“We started mainly by putting lights on the buildings around our farm,” she related. “Then, we started making all the little cut-out snowmen and manger animals and things just escalated from there.”

In fact, one year, Marilyn noted, they had people from 33 states and six foreign countries come to see it — information they were able to gather thanks to a ledger visitors were asked to sign.

The last time the Rock family set up the display on their farm was Christmas 1999. In 2000, the city of Grand Mound took over setting it up at the ball park to continue the custom.

However, it became difficult to find enough volunteers to help set it up, so the city put the word out that if someone was willing to take it over, they could.

For a couple of years, the display wasn’t assembled.

But in 2011, Oltman, who was “looking for something to keep him busy during retirement,” brought it back to life.

Carey said her family’s connection to the Rock family goes back several years — their son is married to the Rock’s granddaughter.

“For us to then acquire this beautiful Christmas tradition,” Carey shared, “it makes it that much more special.”

Carey said while they didn’t have enough time to set out every single piece of the display, they have the bulk of it ready for viewing and will add more for next year.

They have the mini chapel, which was designed to look exactly like the one in which the Rocks were married. Also set up are Santa’s workshop, Santa’s daycare, the gingerbread house, stable, reindeer barn, train, carolers, Santa’s sleigh and reindeer, and numerous other wooden figures.

The display is ready for viewing now through Jan. 1, 5-11 p.m. at the Arndts’ located at 2579 195th St. It is just past TYCOGA Vineyard and Winery. People are welcome to travel down the gravel road, and turn around to the north of their shed. Or, if they prefer, people may park at the winery and walk.

The Arndts ask visitors be mindful of all the cords in the display, and to drive slowly on the road. They are hopeful people will come to see the colorful, fun display as many times as they’d like.

“With the year we’ve had and this COVID mess, I am so excited and happy to share some joy with everyone,” Carey noted. “I want people to remember the spirit of Christmas, even though we’ve had hard times this year. Life is truly a gift, no matter what and we will all make it through this.

“(We will) let the light shine on from Marilyn and Larry and the Rock family. I’d also like to send a special thank you to the Oltmans for passing this on to our family.”

Watching a potential winter storm. Becoming windy with snow developing later in the day. High around 30F. Winds ENE at 25 to 35 mph. Chance of snow 100%. 3 to 5 inches of snow expected.