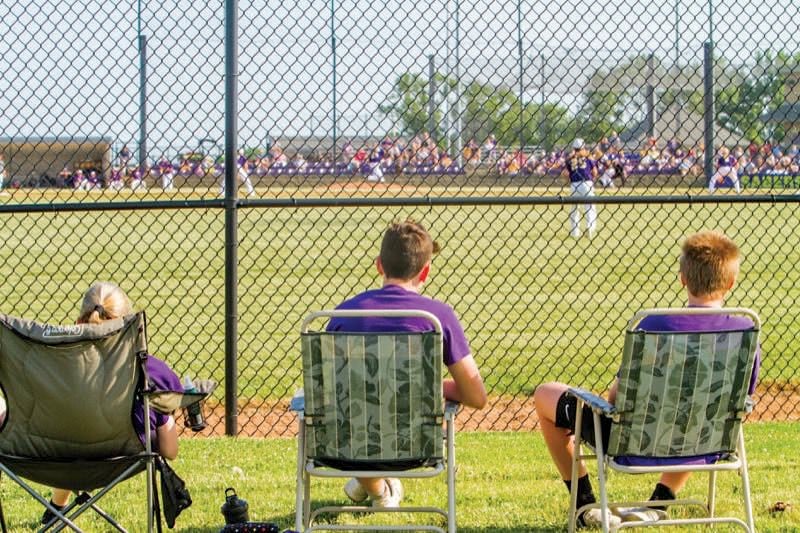 Central DeWitt fans watch the action from behind the outfield fence during Monday’s season opener with Marion. 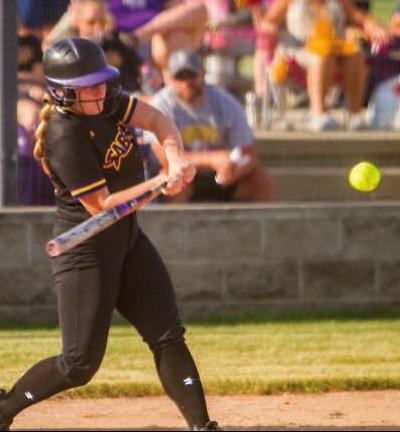 Central DeWitt junior Talbot Kinney swings at an approaching pitch during the Sabers’ game with Marion. 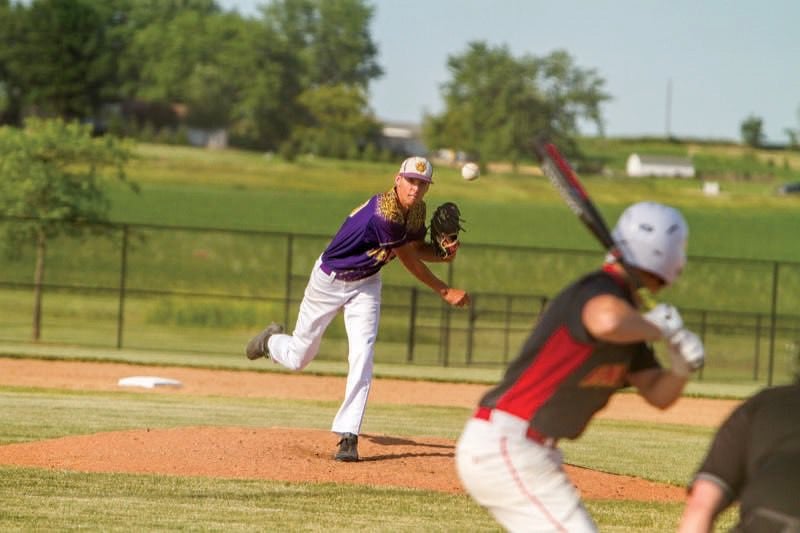 Sabers senior pitcher Alex McAleer fires a pitch to the plate during Monday’s opener with Marion. 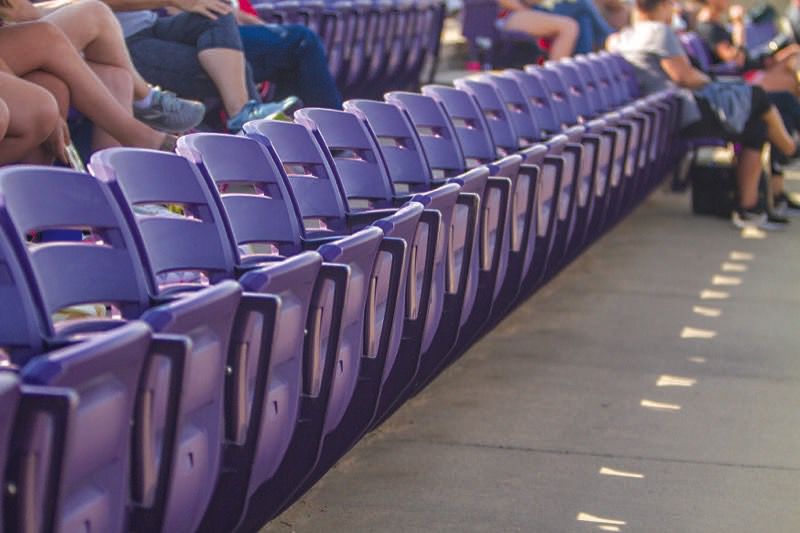 With limited bleacher seating due to the COVID-19 pandemic, fans took advantage of outfield seating and spots along the foul line. 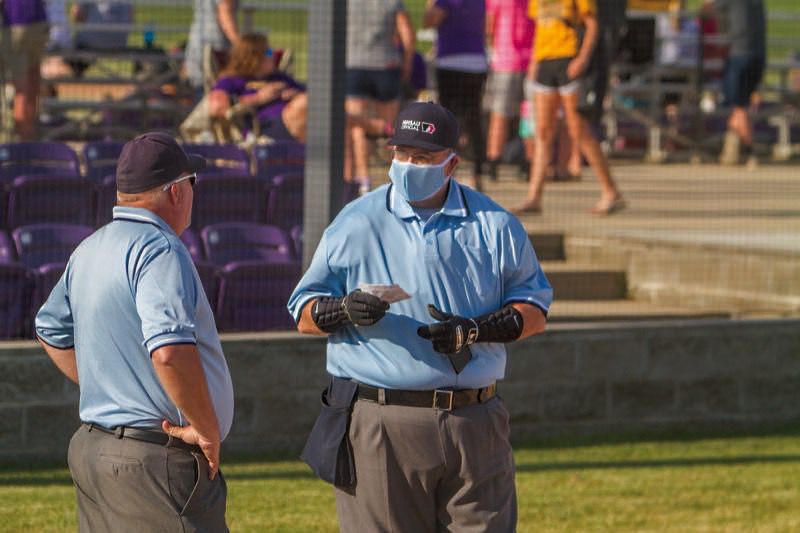 Monday marked the first day of games across the state and players, coaches, fans and umpires took appropriate precautions.

Central DeWitt fans watch the action from behind the outfield fence during Monday’s season opener with Marion.

Central DeWitt junior Talbot Kinney swings at an approaching pitch during the Sabers’ game with Marion.

Sabers senior pitcher Alex McAleer fires a pitch to the plate during Monday’s opener with Marion.

With limited bleacher seating due to the COVID-19 pandemic, fans took advantage of outfield seating and spots along the foul line.

Monday marked the first day of games across the state and players, coaches, fans and umpires took appropriate precautions.

The sights and sounds were familiar — chatter was alive in the dugout, dust rose after slides into second, and the crowd buzzed on every pitch.

But there were some new sights at Monday’s season opener for Iowa baseball and softball teams as well.

Bleacher rows sat empty. Concession stands were quiet. And after a third out, the defensive team returned the ball with them, rather than toss it back to the mound, so it could be sanitized.

Players and coaches have been growing accustomed to the new sights and procedures that have accompanied the return of summer sports in the midst of the COVID-19.

And area activities directors are confident that fans will, too.

“We are all in this together,” said Calamus-Wheatland activities director Michael Bruns, who is also the Warriors’ head baseball coach. “Hopefully, everyone involved will respect the guidelines so we can have as full of a season as possible.”

Schools across the state were given 12 mitigation efforts from the Iowa Department of Education that they are required to follow for all games.

Among the dozen items were the posting of signage, and the proper use of equipment. Players should bring their own gloves, helmets and bats as much as possible, and must bring their own water/beverage, coaches, meanwhile, must sanitize shared equipment before and after each game. The state also implemented a limitation on bleacher seating and the closing of concession stands.

The guidance answers everything from who is allowed in the dugout or the field of play to how often the maintenance equipment, such as rakes, bases and the tractor used to drag the field should be sanitized.

Only personnel deemed “essential” can be in the dugouts, which includes players, coaches, trainers and umpires. Teams cannot exchange handshakes after a game, but can acknowledge opponents in other non-contact measures.

On an even more local level, the area’s athletic conferences met together and provided their own guidelines:

Admission — Eleven of the 14 WaMaC teams will be taking $5 admission for varsity contests. Central DeWitt and Maquoketa, however, are two of the three teams (Clear Creek-Amana is the other) who will be accepting a free will donation instead.

The Sabers’ new conference home this fall, the MAC, is more stringent on admission. The conference, outside of Davenport Assumption, is distributing three tickets to each of its uniformed players, limiting attendance to about 80 people per school.

“We will be giving those tickets to players and parents for those away contests,” Central DeWitt activities director Jered Birt said.

On the other side of the admission spectrum, 11 of the 14 River Valley Conference schools, including Northeast, will be taking free will donations, instead of admission. Durant and Wilton will be accepting normal admission, while West Liberty is not charging admission, nor asking for free-will donations.

The Tri-Rivers Conference is not taking a required gate admission, but will accept donations.

“We are asking that fans bring exact change if they plan to donate to limit the exchange of money between fans and the person taking the gate (money),” Bruns said.

Seating — The WaMaC will have limited bleacher use, per the Iowa Department of Education guidelines, with Maquoketa, Marion and South Tama allowing no bleacher usage.

The River Valley will also have limited or no bleacher seating available.

In order to practice social distancing, a number of teams are extending their dugouts. That will take up some of the seating next to the dugouts, but both Cal-Wheat and Central DeWitt are keeping their outfield fences clear to accommodate fans.

Concessions — Concessions will not be offered in any of the conferences. The WaMaC and River Valley will allow coolers to be brought in to games — they will be subject to search — but must be limited to use by single households.

Cal-Wheat will also allow fans to bring their own food and drink.

Restrooms — In all three conferences, restrooms will be available and will be cleaned and sanitized after each night.

Personal protective equipment — All three conferences encourages spectators to bring their own hand sanitizer. Masks are not required, but are encouraged for fans who wish to wear them.

The big thing for fans, according to area activities directors, is using common sense and taking advantage of opportunities to social distance.

That includes staying home if they have any symptoms related to COVID-19. They also encourage fans to check their temperature prior to attending games, and adhering to the new seating guidelines.

“Although we are not limiting fan attendance, we are still asking fans to social distance,” Birt said. “We are encouraging fans to bring lawn chairs and sit down the baselines or in the outfield.”

“We have kept our banners off the outfield fence so fans will be able to sit all around the diamond for baseball and softball,” Bruns added.

And while some guidelines are uniform across the state, certain schools can have different rules — like the MAC’s attendance policy — so, Bruns said, “fans will need to keep up with our social media pages to get information for away contests.”

Area players and coaches have had two weeks to grow comfortable with their own set of changes.

Since practice started on June 1, the state’s baseball and softball teams have worked with their own set of mitigation efforts.

For example, no dugouts may be used during practice, only games.

Additionally, players and coaches have been checking their temperatures before attending practices.

Even sunflower seeds, a summer staple, have been outlawed.

It has meant more responsibility for coaches, who are not only tasked with sanitizing equipment before and after practice, but also designing workouts that keep players apart and tracking player absences.

Bruns, who has been right in the middle of the action, has been impressed with what he has seen.

“I think our coaches have done an outstanding job handling the guidelines,” he said.

Central DeWitt has made the most of its facilities, health volunteers at its disposal, and a group of athletes ready to roll with the changes, Birt said.

“We are fortunate to have two baseball and softball fields right next to each other, so coaches and players can split up and have smaller groups for drills,” Birt said. “Our school nurse, Ann Bixby, or trainer Brent Yotty have been at all practices the first two weeks helping chart temperatures.

“As our athletes arrive at the stadium it has become the first part of their routine and they have done a phenomenal job of just making it part of the new normal.”

High school sports had been on a hiatus since March 16 when the spring season was suspended and ultimately canceled on April 17. Summer sports practices were originally supposed to begin May 4.

“It has been great to see kids back on the field again and I am really looking forward to some summer ball,” Birt said.

We have all the pieces to the financial puzzle