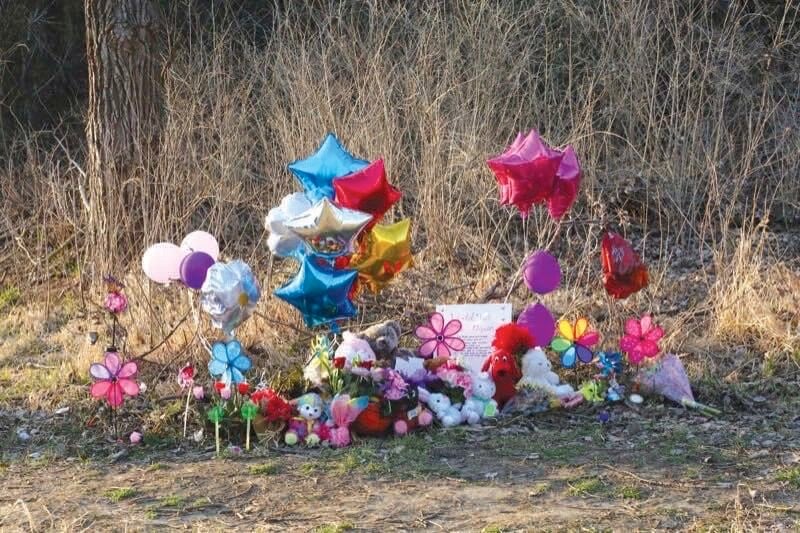 A memorial honoring Breasia Terrell was constructed at the site near where her remains were found March 22 near a pond north of DeWitt. Terrell, who was 10 at the time of her disappearance, was reported missing in July.

Authorities said March 31 remains found in a wooded area north of DeWitt were those of missing Davenport 10-year-old Breasia Terrell.

She had been missing since July 10 and was the subject of a massive, multi-county missing-child case that included multiple searches in the eastern portions of Clinton County, primarily near Low Moor and Camanche.

Police made the identity of the remains public following an autopsy and investigation by multiple agencies, including the Iowa Division of Criminal Investigations and FBI.

Paul Sikorski, Davenport Chief of Police, said identifying the remains closes the missing-child case. Investigators officially declared the case a homicide investigation, although Sikorski said police had been operating as if it was a homicide case anyway.

Officials are asking for the public’s help in gathering information.

“Anything that our community thinks could be related to this whether it’s in Clinton County or in Davenport, we ask you to contact our agency to give that information,” Sikorski said. “As little as you think it is, or that it may be inconsequential, I assure we will look into it. We want the community to know, we still need you.”

Sikorski, who paused multiple times during the March 31 press conference to gather his emotions, said he could not divulge additional information regarding the investigation, but his department was passionately investigating, and officials would keep the public in the loop.

“I think the biggest thing for the community to help with this is compassion and prayers for Breasia’s family, and patience when it comes to the investigation,” Sikorski said. “I can assure our community that investigators are working diligently to bring justice on Breasia’s behalf.”

Sikorski said the investigation has affected officers “deeply” before pausing to gather his thoughts.

Two fishermen found Terrell’s remains March 22 near a pond along 270th Avenue located just south of the intersection of U.S. 61 and 218th Street — or Old Highway 61 — north of DeWitt.

The discovery jumpstarted a multi-day investigation at the site.

Terrell was reported missing July 10 after reportedly spending the night with a half-brother and his father, Henry Dinkins. Dinkins is currently in the custody of the Davenport Police Department on unrelated sex offender registration and probation violations, Sikorski said.

Police have named Dinkins a person of interest in Terrell’s disappearance. No suspects in the case have been named, and no arrests have been made in connection with the discovered remains, Sikorski said.

Showers in the morning with isolated thunderstorms arriving in the afternoon. High 77F. Winds S at 10 to 20 mph. Chance of rain 40%.