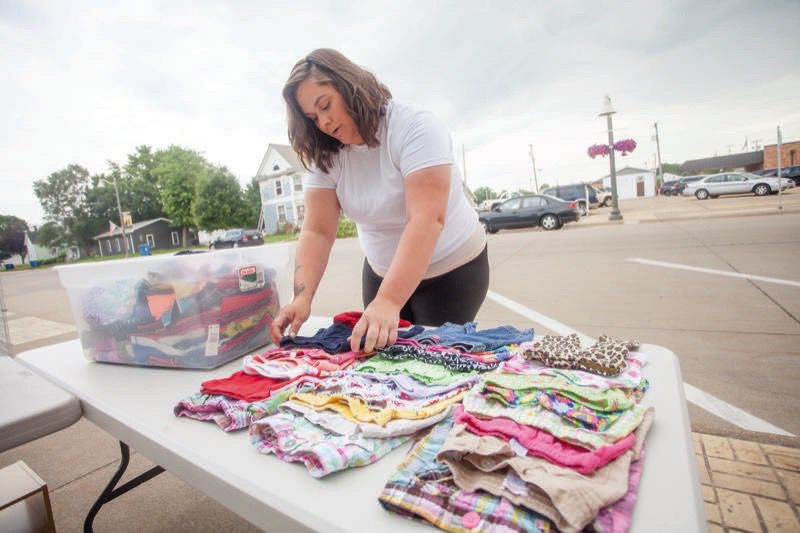 DeWitt Referral Center employee Crystal Robinson sets up for the center’s sidewalk sale last week. Robinson, coworker Sharon Boedeker, and others have adjusted their displays during the COVID-19 pandemic. Robinson said the center’s outside-only sales floor has attracted similar traffic levels of its indoor predecessor. The display is rotated weekly and based on interest. For example, last week the display had an Independence Day flair. 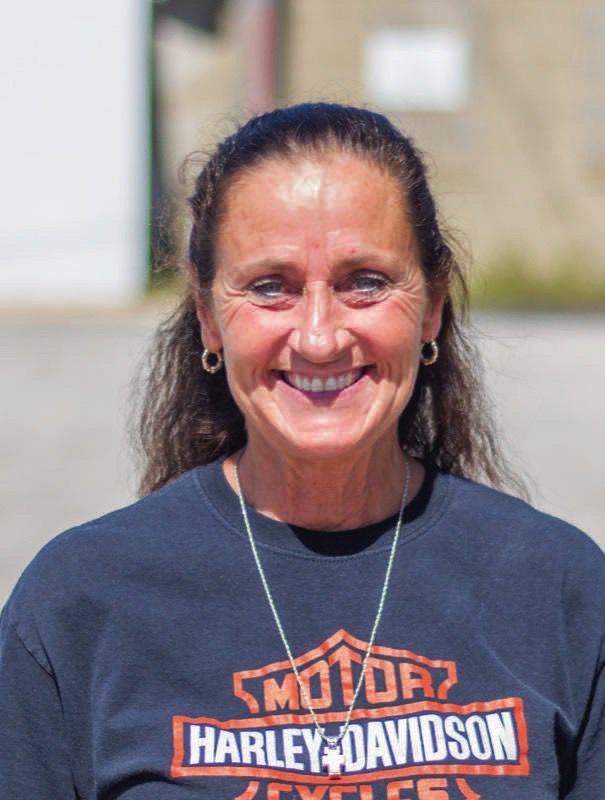 After a two-and-a-half-month hiatus, the DeWitt Referral Center’s new-building campaign is up and running again.

The goal is to raise just shy of $1 million for a new building that will double the center’s space, enhance storage for food pantry items, and provide the amenities not available in the current 45-year-old location.

The campaign kicked off strongly earlier in the year and raised more than $200,000 in the first two months. But once the coronavirus pandemic crippled the local economy in March, organizers decided to put the campaign in a “silent mode.”

“We are very aware of what our mission is, and that’s to serve those in need,” said the Referral Center Board’s president, Larry Fuglsang. “We could see (the pandemic) coming. It was a tough board decision. But, we made the right decision because COVID would have probably shut the thrift store down anyway. We needed the space to bring in the food to provide to the community.”

And it did just that by providing food boxes for anyone who needs one. The pandemic also helped expose more deficiencies in the center’s current location — a former fire station — where it has been since 1977.

Fuglsang said food storage space of any kind has become more valuable than ever before. To meet the sudden need for food amid the pandemic, food storage invaded the thrift store portion of the building.

“It was trying to put 15 pounds of potatoes in a 5-pound bag,” Fuglsang said. “It put us in a position where there was no space. (Workers) had tables up everywhere because food needs to be off the floor. When you walked in there you had to kind of slide around.”

The proposed new building will have large spaces for dry, cold and frozen food storage.

“The last month, with the food we just wanted to make sure our people were fed,” said Michelle Ehlinger, director of the Referral Center. “Now that the stimulus (money) and tax (refunds) are running out they are starting to lose their jobs because businesses are laying off.”

The functionality of the new building should help better serve clients.

“We (want to) build a conservative building,” Fuglsang said. “But there are a lot of codes for a building that will store food and pass it along. We’ve seen the failure of this building and how it’s threatening us staying here. We’re trying to maintain our space, and hopefully we can hang on just long enough to move.”

Another need identified by Ehlinger is privacy. The center provides rent and utility assistance to those within the Central DeWitt Community School District. Fuglsang says there’s too much integration between the thrift store portion of the center and the food pantry and monetary assistance portion.

The way the current center is designed, there’s no adequate private space for individuals to discuss their finances and needs, Ehlinger said. In the past month, the influx of DeWitt residents using that service has highlighted the need for privacy.

“I was a client here in 1992, and I can remember coming here. I was having trouble and was at one of the lowest points of my life,” Ehlinger said. “And I can remember thinking then, the ladies were selling stuff, and I had to stand there at the cash register until I got to talk to Monica (Miller, the center’s director at the time). It kind of bothered me.”

The new building will have a vestibule to direct clients to the food pantry and private offices, and shoppers the opposite way to the thrift store.

The new building’s proposed layout will help volunteers and workers efficiently navigate the space, and it ought to cut down on utility bills, Ehlinger said. It also will have a laundry room and utility area to clean toys and clothes, if necessary. Ehlinger said she takes donated clothes home when they need to be sanitized.

“What it boils down to is we’re helping a community that’s a growing community,” Fuglsang said. “And as it grows we have not.”

Fuglsang and the rest of the referral center’s board will kick-start the campaign’s reboot Wednesday with a zoom meeting highlighting the details. Another meeting will take place Sunday afternoon.

Fuglsang said those who are interested in more information can call the center at (563) 569-9612. For now, the Zoom session is being shared with people who have already expressed interest in the campaign.

Originally, campaign organizers had a bevy of events scheduled to help boost numbers. But those plans quickly dissolved as social distancing reigned supreme in public settings. Now, the campaign’s focus is a more grassroots approach.

“We are totally aware some people aren’t in a position to donate,” Fuglsang said. “Who knows when they will be comfortable with making a financial decision? And we understand that. But then there are some that have not been that impacted, and we hope they still consider making a donation,” he said.

“It’s tough to go out there with two hands out — one for a campaign and one to help the person in need,” he said. “But here we are. Things were looking upward, and the trend was showing maybe we were coming out of (the worst of the pandemic) so we decided to kick it off.”

Fuglsang says in a perfect world, and by the end of the calendar year, the campaign would reach about 75% of its $995,000 goal. That momentum could enable organizers to begin discussing construction development in the spring.

As the pandemic worsened and a need to increase cash flow became bigger, workers at the Referral Center began setting displays up on the sidewalk in front of the building.

The already-too-small space inside made social distancing impossible. So, Ehlinger and her crew decided the best course of action was to fill tables and racks with clothes, shoes, purses, toys, etc. in plain view of everyone driving by.

“It’s anything people might be looking for,” said Referral Center employee Crystal Robinson. “Initially we had a lot of people, because baseball was going to start, so we brought out all our sports equipment and made sure that’s available.”

Robinson said the items are rotated on a weekly basis to stay fresh, and on occasion, are themed based on an upcoming holiday. Last week’s inventory had a red, white and blue flair.

Ehlinger said the sidewalk sales are helping the center keep up with the demand for rent and utility assistance while the building is closed to the public.

Some clouds and possibly an isolated thunderstorm in the afternoon. Storms may contain strong gusty winds. High 87F. Winds W at 10 to 15 mph. Chance of rain 30%.