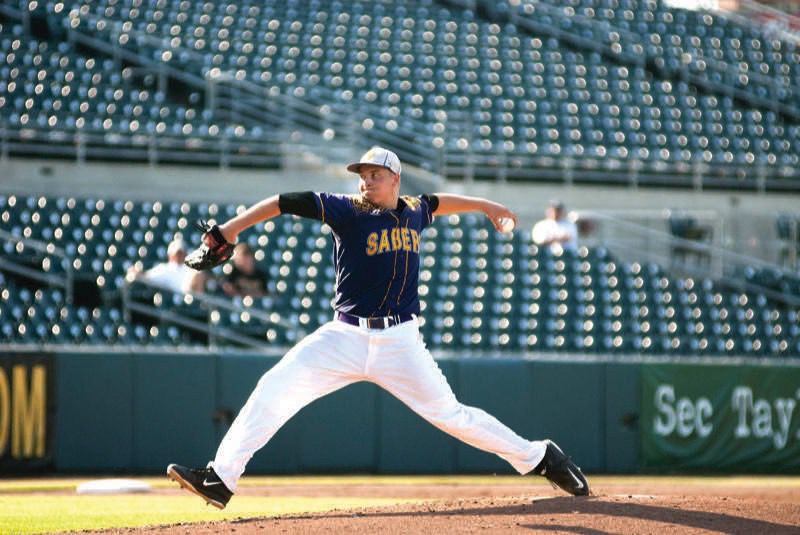 Central DeWitt graduate T.J. Sikkema fires a pitch during the 2016 Sabers’ 3A state quarterfinal game. Sikkema was drafted Monday night by the New York Yankees as the 38th overall pick in the MLB First-Year Player Draft. 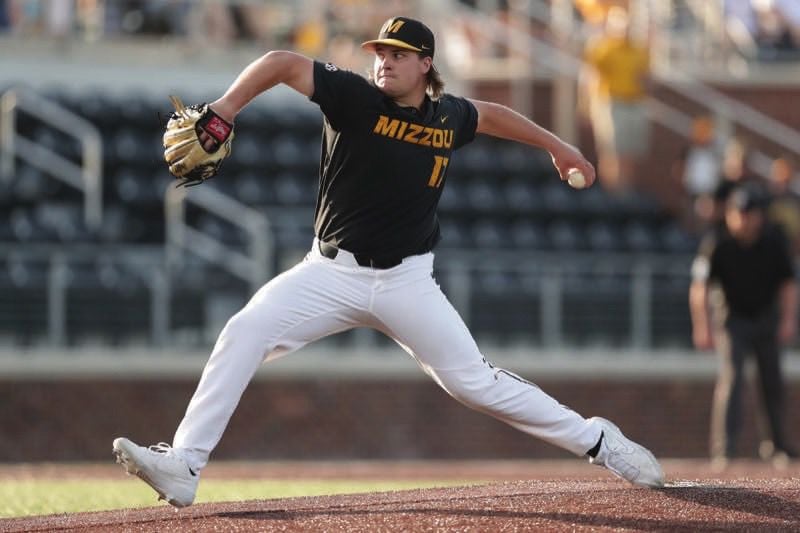 Sikkema earned All-SEC and All-America honors this spring for the University of Missouri. Sikkema won seven games in his junior season with the Tigers, posting a 1.32 ERA and striking out 101 batters.

Central DeWitt graduate T.J. Sikkema fires a pitch during the 2016 Sabers’ 3A state quarterfinal game. Sikkema was drafted Monday night by the New York Yankees as the 38th overall pick in the MLB First-Year Player Draft.

Sikkema earned All-SEC and All-America honors this spring for the University of Missouri. Sikkema won seven games in his junior season with the Tigers, posting a 1.32 ERA and striking out 101 batters.

The butterflies were there. And they were rumbling.

Even with a heads-up, T.J. Sikkema still felt the nerves — the product of a once-in-a-lifetime moment.

Sikkema, a DeWitt native and junior at the University of Missouri, was one of 78 baseball players across the country to be selected in the first two rounds of the Major League Baseball draft Monday night.

Using a Competitive Balance Round pick they received from the Cincinnati Reds in a trade, the New York Yankees drafted Sikkema with the 38th pick overall.

“It’s starting to sink in now,” Sikkema said Tuesday morning. “It’s pretty exciting and I’m happy with the team that drafted me.”

Ranked as one of the top 100 draft prospects by both Baseball America and ESPN’s Keith Law, Sikkema spent his Monday at home watching the draft on television with his family.

Just as the first round was coming to a close, Sikkema received a phone call from agent Randy Rowley telling him to be ready: his name could be called soon.

“That made me a lot more nervous,”

It was the Yankees.

Seconds later, Sikkema’s name was announced by former Yankees all-star Nick Swisher on the same television he was watching — just three picks after his Mizzou teammate Kameron Misner, making them the first Tigers teammates to be drafted in the first two rounds.

The Yankees will be receiving a versatile and talented southpaw. And they know it.

“[T.J.] has a unique ability to throw from different angles,” said Damon Oppenheimer, the Yankees’ Vice President of Domestic Amateur Scouting, in a release. “He’s got plus stuff, he throws it for strikes, and the guy’s a real ultimate competitor — he really gets after it on the mound.

“He can probably get to the big leagues quickly as a reliever, but we see him as a starter,” Oppenheimer continued. “When you can get a guy who pitched in the SEC with success, it goes a long way.”

Sikkema has found plenty of success at the prep and college level.

He was a four-time all-state selection for the Central DeWitt baseball team, setting the school record for career strikeouts and helping lead the Sabers to the state tournament for the second time in program history.

The 2016 graduate then picked up right where he left off in the collegiate ranks.

In his freshman campaign, Sikkema made 22 appearances for Mizzou, most of them out of the bullpen and won eight games – tied for the most ever in program history by a freshman – while striking out 81 batters and posting an Earned Run Average (ERA) of 2.72.

A year later, Sikkema started 10 games for the Tigers and had 76 strikeouts with a 3.34 ERA.

Sikkema’s junior year, however, proved to be his best year yet.

He won seven games and saved two others, while posting a 1.32 ERA and striking out a college career-best 101 batters. Opponents, meanwhile, hit just .175 against him.

For his play, the left-hander was named to the second team of the All-SEC squad, was a semifinalist – the third-ever from Missouri – for the Golden Spikes Award given to the best amateur baseball player in the country, and became the first Tiger since 2009 to earn All-America honors as he was a third-team pick for the Collegiate Baseball All-American squad.

Sikkema credits another year of improvement and maturity for his big spring.

“Another year older and getting better with my pitches,” he said. “I was able to change up my arm slots [the angle of the arm when a pitch is released] more.

“It was a good all-around year and I was very happy with it.”

Eligible for the draft for the first time – four-year college players are not eligible until they complete their junior season or turn 21-years-old – Sikkema met with numerous teams through the lengthy draft process, but began to have an idea of which squads were truly interested.

“I kind of figured out which teams were showing a little more interest,” he said.

One of those squads was the accomplished New York Yankees, a team with 27 World Series titles and 40 American League pennants to its name.

“It is a team that has a lot of history,” Sikkema said. “But I’m not going to shy away from that.”

The first call will definitely be the most memorable, but Sikkema and the Yankees will have plenty of conversations in the upcoming weeks.

There are logistics to work out – a physical, a contract signing (the assigned value of the 38th overall selection is $ 1.95 million), and, ultimately, a first assignment within the Yankees’ system of teams — the closest of which to DeWitt is located in at the base of the Appalachian Mountains in Pulaski, Virginia.

But those two calls Monday night were also far from the last time Sikkema’s phone was active.

Soon after his draft selection became official, he was bombarded with congratulation messages and well-wishes. That was par for the course for a community that Sikkema says has “rallied around” him since he graduated from Central DeWitt and headed to Missouri.

“The support here has been a really big thing for me,” he said. “The amount of texts and messages I received on my phone with people congratulating me is awesome and really surreal.

“I couldn’t be more thankful for all of the support I have received.”

A mix of clouds and sun during the morning will give way to cloudy skies this afternoon. High 36F. Winds ENE at 5 to 10 mph.