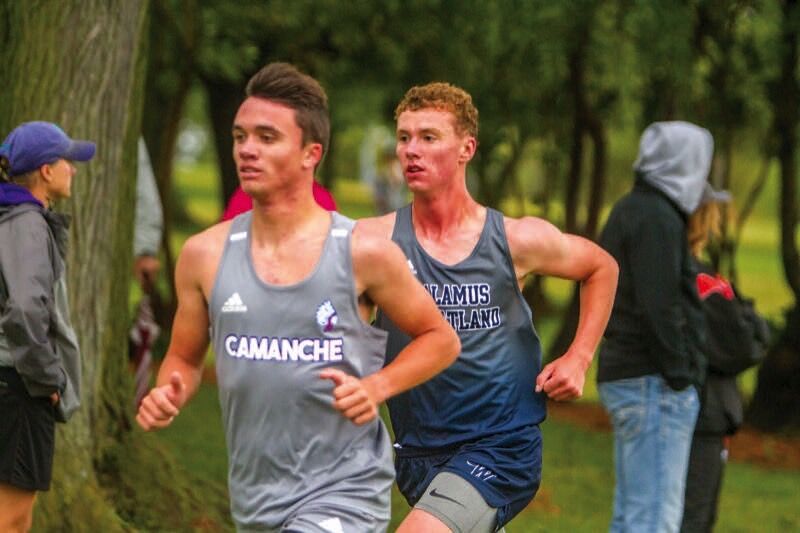 Calamus-Wheatland senior Chase Knoche stays close to Camanche’s Dylan Darsidan early at Tuesday’s Tipton Invitational. Knoche, ranked fifth in 1A, was third in the boys race which also featured the top-two ranked runners in 2A (Darsidan and Tipton’s Caleb Shumaker) and the top-ranked runner in 1A (Bellevue’s Brady Griebel). 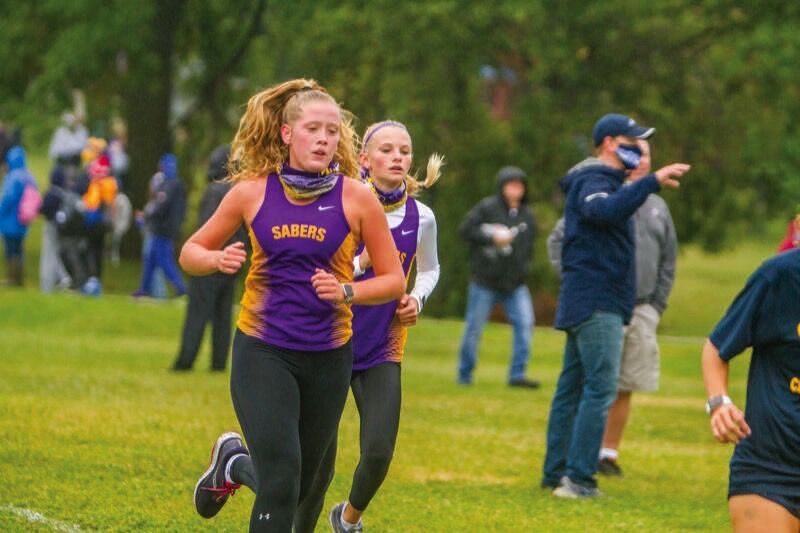 Calamus-Wheatland senior Chase Knoche stays close to Camanche’s Dylan Darsidan early at Tuesday’s Tipton Invitational. Knoche, ranked fifth in 1A, was third in the boys race which also featured the top-two ranked runners in 2A (Darsidan and Tipton’s Caleb Shumaker) and the top-ranked runner in 1A (Bellevue’s Brady Griebel).

TIPTON — As an early-season cross country meet, the Tipton Invitational has a history of testing competitors with a dose of late-summer heat and humidity.

Some of that traditional warmth, though, would have come in handy Tuesday as wet, windy and cold conditions provided a different kind of challenge to runners, including all three Observer-area programs.

It was going to take more than dreary conditions, however, to slow down Calamus-Wheatland senior Chase Knoche or the Northeast girls cross country team who led the way in impressive performances.

Just days after opening his season with a win in the A section of the Bob Brown Invitational, Knoche battled the top-ranked runners in Class 1A and 2A and the second-ranked runner in 2A and more than held his own, finishing third overall with a clocking of 16:01.

The area’s top team finish, meanwhile, came from the Rebels girls, who put three runners in the top 25 to finish fourth in the team race with 127 points, while holding off a pair of fellow River Valley Conference squads — Anamosa (130 points) and Cascade (136 points).

Knoche cut more than a minute from his winning time in Iowa City to finish third behind Bellevue’s Brady Griebel (ranked 1st in 1A) and Tipton’s Caleb Shumaker (ranked 2nd in 2A), but ahead of Camanche’s Dylan Darsidan (ranked 1st in 2A).

Sophomore Jacob Weih chipped in a 69th-place finish for the Warriors, who were eighth in the team standings, while freshmen Jackson Riedesel and Austin Sedgwick were 81st and 104th, respectively.

Freshman Kelvin Machande and sophomore Daniel Rowland finished off the Rebels’ team score of 178, which put them sixth overall. The two young runners finished back-to-back in 48th and 49th with times of 19:08 and 19:10, respectively.

Senior Zebediah Cox added a time of 19:33 to finish 58th, while Joe Hasken finished off the Rebels’ day with a 66th-place clocking of 20:10.

Freshman Ben Zimmer continued his strong start for the Central DeWitt boys, taking 25th overall with a clocking of 18:07.

Just 13 places separated the rest of the four scoring Sabers, who helped the team to an 11th-place finish.

The Northeast’s girls top finishers also stayed close together. Sophomore Cenady Soenksen led the way with a 17th-place finish in 21:07. That was two spots ahead of fellow sophomore Grace Ketelsen, who crossed the finish in 21:22. Soon after, Faith Ketelsen became the 22nd runner across the finish line with her time of 21:44.

Central DeWitt was seventh in the team standings with 174 points.

Sophomore Reagan Hofer also broke 24 minutes with her time of 23:57, good for 42nd overall, while fellow sophomore Alexis VanZee joined them in the top 50 with her 48th-place time of 24:44.

Hannah Sunday and Grace Mosier capped off the Sabers’ team score, finishing back-to-back in 53rd and 54th, and they were followed immediately by freshmen Tori Rheingans and Eliza Petersen, who were 56th and 57th, respectively.

Leading that parade of Central DeWitt finishers was Cal-Wheat senior Emma Bopp, who dropped huge time from her debut to finish 52nd overall with a clocking of 25:20.

Despite strong offensive start, Packers know drops have resulted in ‘a lot of yards left out on the field’

When Big Ten football does return ... 10 Huskers who have fans buzzing