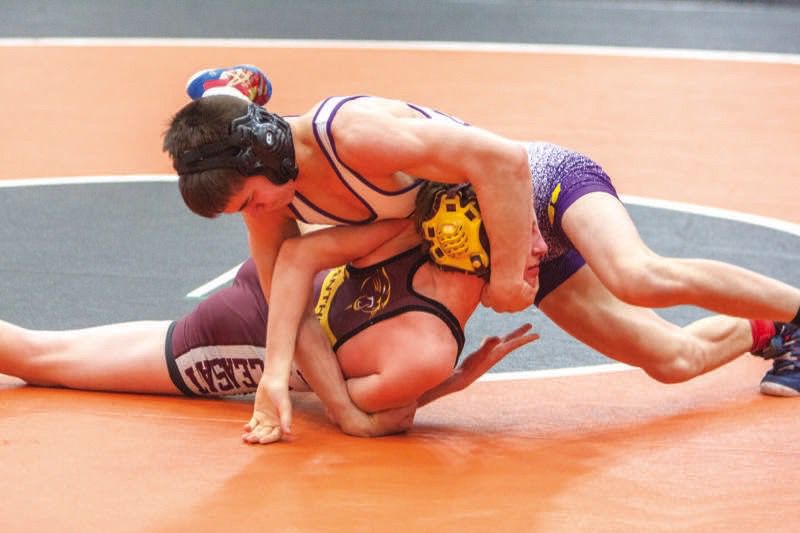 Central DeWitt junior Keaton Zeimet drives into Mount Pleasant’s Bowen Davis to put him on his back during Saturday’s 2A District 8 meet hosted by Washington. Zeimet earned back points on five separate occasions in his 16-1 technical fall over Davis and later added a pin in the finals at 113 pounds to earn his third trip to the state wrestling tournament. 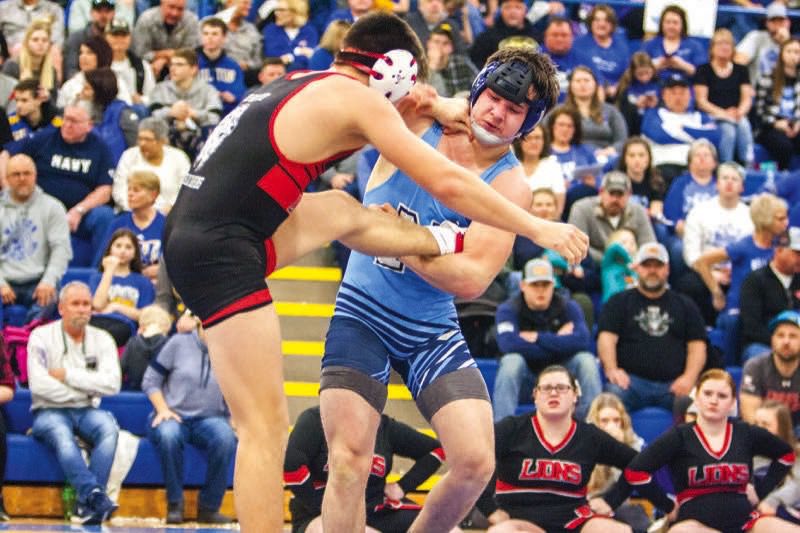 Northeast senior Ty Schmidt controls Lisbon sophomore Max Kohl’s leg during the 170-pound finals match at Saturday’s 1A District 8 meet at Wilton. Schmidt dropped a 9-4 decision to Kohl, but his second-place finish at the weight made him the Rebels’ first state qualifier since 2012. 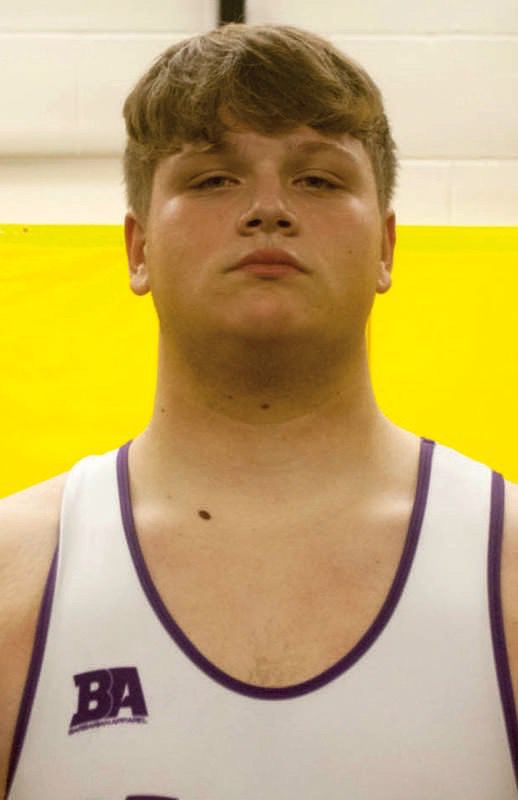 Central DeWitt junior Keaton Zeimet drives into Mount Pleasant’s Bowen Davis to put him on his back during Saturday’s 2A District 8 meet hosted by Washington. Zeimet earned back points on five separate occasions in his 16-1 technical fall over Davis and later added a pin in the finals at 113 pounds to earn his third trip to the state wrestling tournament.

Northeast senior Ty Schmidt controls Lisbon sophomore Max Kohl’s leg during the 170-pound finals match at Saturday’s 1A District 8 meet at Wilton. Schmidt dropped a 9-4 decision to Kohl, but his second-place finish at the weight made him the Rebels’ first state qualifier since 2012.

WASHINGTON & WILTON — No Central DeWitt wrestlers had pinned more foes this winter than the junior duo of Keaton Zeimet and Cole Miller.

So, it seemed only fitting that the two Sabers would punch their respective tickets to the state wrestling tournament with falls.

The two district champions will be joined in Des Moines by Northeast senior Ty Schmidt, who used a victory in the first of two rematches to become the Rebels’ first state qualifier since 2012.

Zeimet earned bonus points in both of his bouts. The junior 113-pounder used two takedowns and 12 nearfall points to roll to a 16-1 technical fall in 4:07 against Mount Pleasant’s Bowen Davis in the semifinal, earning back points five different times against the freshman.

The victory set up a rematch of last week’s sectional final with West Liberty’s Alex Beaver.

In the first meeting between the two, Zeimet earned a quick fall in 53 seconds.

The rematch was nearly identical with the Saber earning an early takedown and turning Beaver for a fall in 58 seconds.

In his four sectional and district matches, Zeimet outscored his foes 35-1 with the lone point against coming on a penalty.

Miller broke things open early in his semifinal match against Solon’s Nash Altman, picking up a takedown and three nearfall points in the final 30 seconds of the opening period.

After a scoreless second period, Altman picked up a penalty point midway through the third period, but that was the extent of his scoring as Miller added a late escape to finish off a 6-1 victory.

The points were harder to come by in his final match against Brayden Hartman of Washington.

Neither wrestler scored in the first period and the second period followed without a point as well.

Instead, the Sabers junior was able to get Hartman on his back and pinned him 50 seconds into the period for his 21st fall of the season (Miller has outscored his first four postseason foes, 15-3).

A little more than 40 miles away at Wilton, Schmidt opened his 1A district meet with a conference rematch against the host’s Cameron Keith.

The two wrestlers had met in the semifinals of the River Valley Conference tournament with Schmidt earning a fall 48 seconds into the match.

Keith avoided a second pin, but he had no answer for Schmidt, who used a takedown and two nearfall points to build a 4-0 lead after a period.

That lead grew to 7-0 when Schmidt picked up three more nearfall points in the second period.

Keith got on the board with a reversal near the midway point of the third period, but Schmidt hit his own reversal two seconds later and rode out his foe for the remainder of the match to lock up a 9-2 victory.

That set up a second rematch for the Rebel as Schmidt faced off with Lisbon’s Max Kohl — his sectional final opponent a week earlier — in the district final.

Just like their first meeting, Schmidt scored first when Kohl was whistled for a penalty.

The Lion countered with a reversal to start the second period, but again Schmidt answered quickly with his own reversal to make it 3-2.

Kohl, though, earned an escape to knot things up and then a takedown to take a 5-3 lead.

Two nearfall points doubled the margin, but Schmidt got an escape to pull back within three.

One final takedown for Kohl, however, gave the sixth-ranked wrestler a 9-4 decision.

While Schmidt was battling Kohl, Keith took on Lone Tree’s Will Hotz in the third-place match. Keith trailed by one entering the third period, but earned a quick takedown and then rode out Hotz for the rest of the match.

That clinched a third-place finish, but also assured Schmidt second and his spot at the state meet.

A pair of ranked opponents will provide stiff opening challenges for Miller and Schmidt as they make their state debuts Thursday.

Things kick off for the area’s trio of qualifiers Thursday afternoon with 2A first-round and first-round consolation matches.

Zeimet, the third seed at 113 pounds, will be on the mat first as he takes on sophomore Zachary Klahsen of Aplington-Parkersburg/Grundy Center.

Klahsen is 13-11 on the season and was the runner-up in 2A District 6 to Carter Fousek of Crestwood (Cresco), the top-seeded wrestler in the bracket.

The winner of that first-round match will take on either Jase Goodell (26-11) of Humboldt or Carter Littlefield of Jesup (31-7) in the quarterfinals. Both were district runners-up and sit on opposite ends of the experience spectrum — Goodell is a freshman, Littlefield a senior.

Second-seeded Cole Whitehead of Center Point-Urbana looms as a potential semifinal opponent. The Stormin’ Pointers junior has been responsible for both of Zeimet’s setbacks this season.

Fousek, meanwhile, is seeking his second title after he won the 2A 106 crown last season.

Miller is matched with eighth-seeded Chris Van Der Brink of Boyden-Hull/Rock Valley in the first round at 285 pounds.

Van Der Brink (41-3) is ranked sixth by The Predicament and two of his setbacks have come to fourth-ranked Jarrett Meyer of Central Lyon (he avenged those losses with a win in the 2A District 7 final).

An even tougher potential opponent would wait in the quarterfinals in the form of ADM’s Kaden Sutton. Sutton (36-1) was the runner-up at 220 pounds last season and is both top-seeded and ranked No. 1 in the class.

Meyer (32-1) and Derrin Sesker (38-2) of Van Meter/Earlham earned the four and five seeds, respectively, and are also in the top part of the bracket, while two of Miller’s WaMaC foes — Maquoketa’s Taven Rich (38-1) and West Delaware’s Carson Petlon (30-3) — earned the second and third seeds and could meet in the other semifinal.

The 1A first round and first-round consolation matches are set for 6 p.m. Thursday.

Schmidt will be matched up with sixth-seeded Tristan Mulder of Western Christian.

Mulder (25-1) is back in the 170-pound bracket after he finished as the runner-up at the weight as a sophomore.

Mulder is ranked third by The Predicament and his lone loss this season came to second-seeded Carson Tenold of Don Bosco.

The winner of Thursday’s first-round bout would meet either third-seeded Drew Venteicher (31-0) of Bedford/Lenox or Cael Hester (36-5) of English Valleys.

Tenold, the runner-up at 160 pounds last year (Venteicher was third at the weight), looms for a potential semifinal matchup, while Hudson’s Ethan Fulcher (45-0) earned the top seed. He was third last year at 170 pounds.

Except for a few afternoon clouds, mainly sunny. High 72F. Winds SSE at 5 to 10 mph.