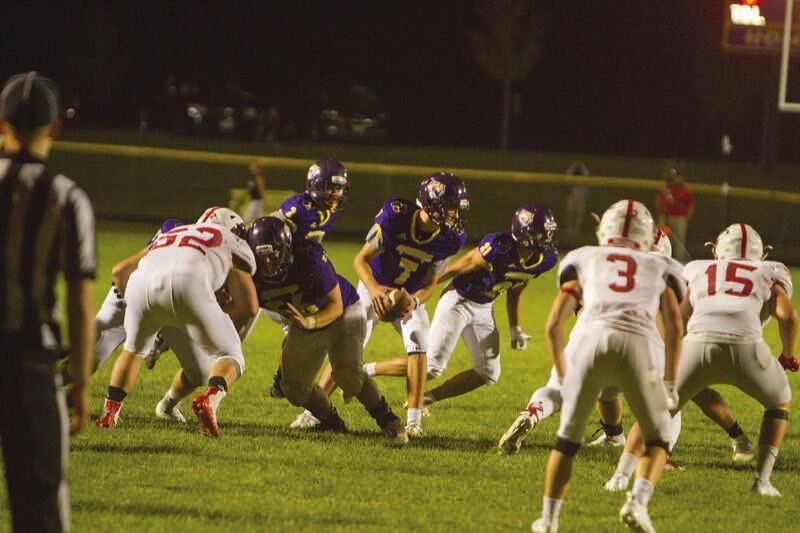 Central DeWitt all-district selections Henry Bloom (7), Garrett Sailor (21) and Kaiden Muhl (2) all move in the backfield, while a fourth all-district pick, Tyson Belk (56), provides a block during the Sabers’ victory over Davenport West. The Sabers finished with 1,506 yards of total offense in 3A District 4 play, the top mark in the district. 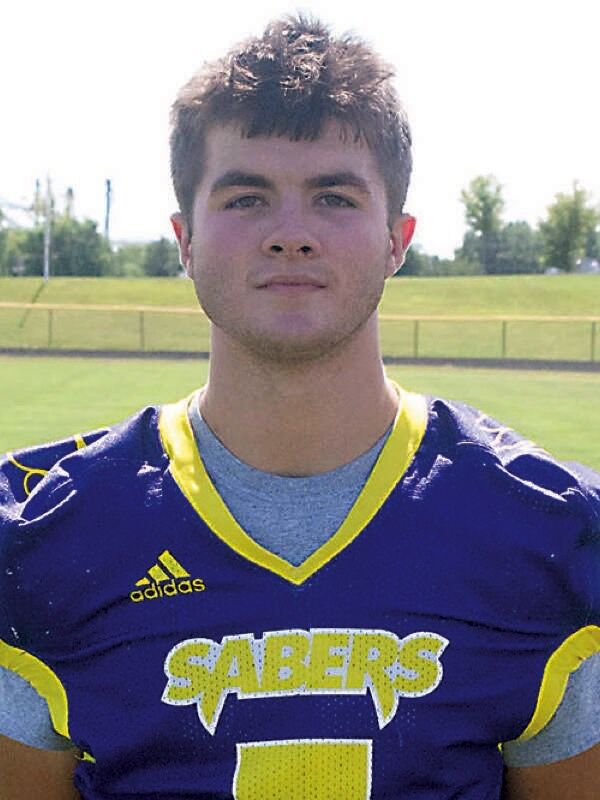 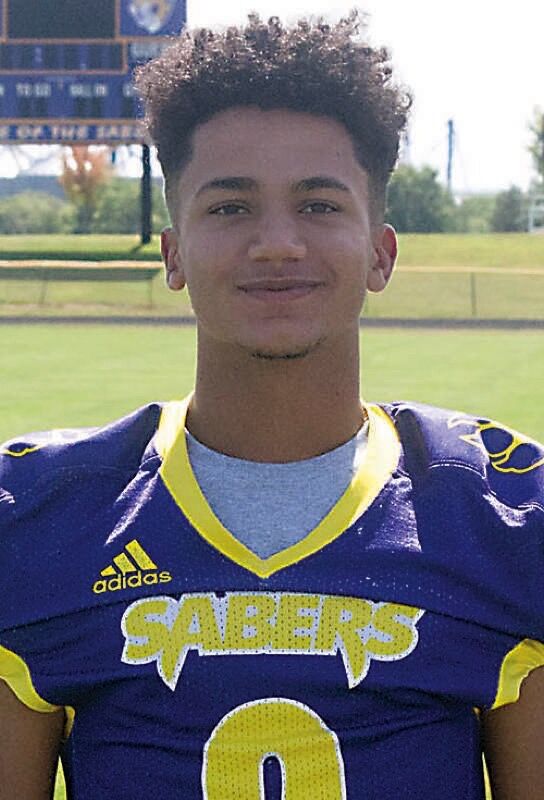 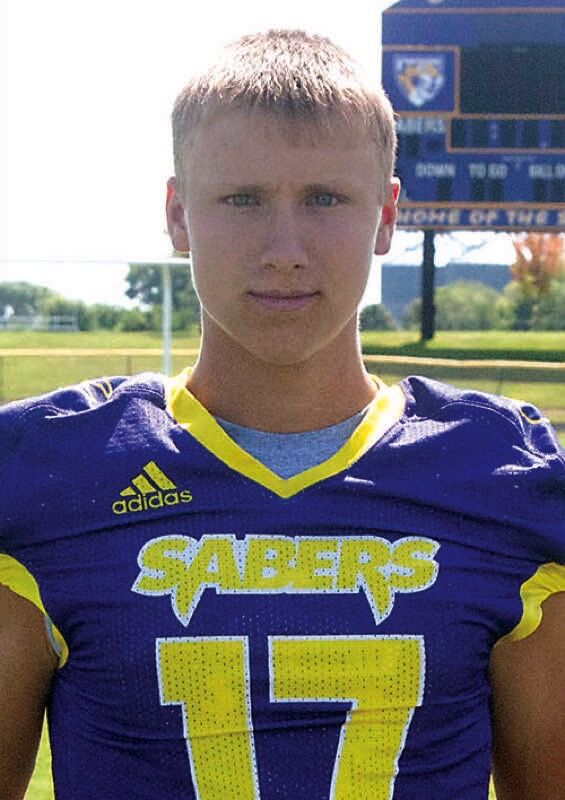 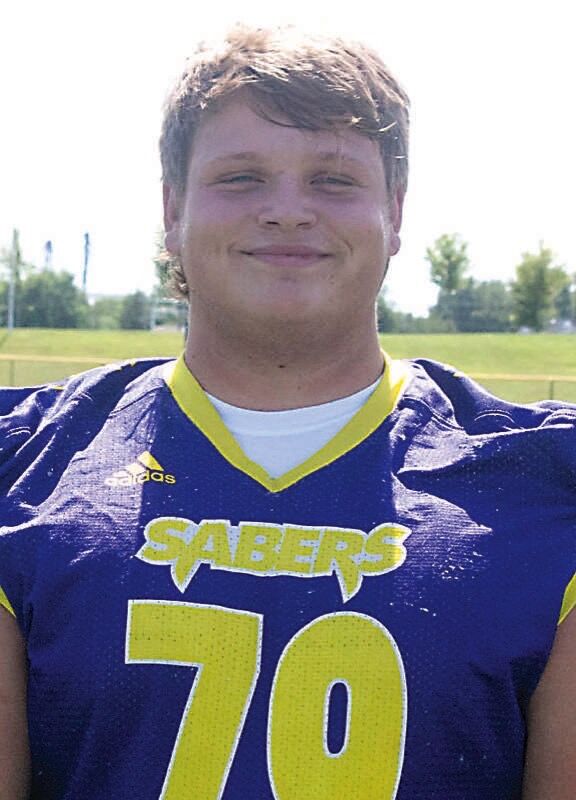 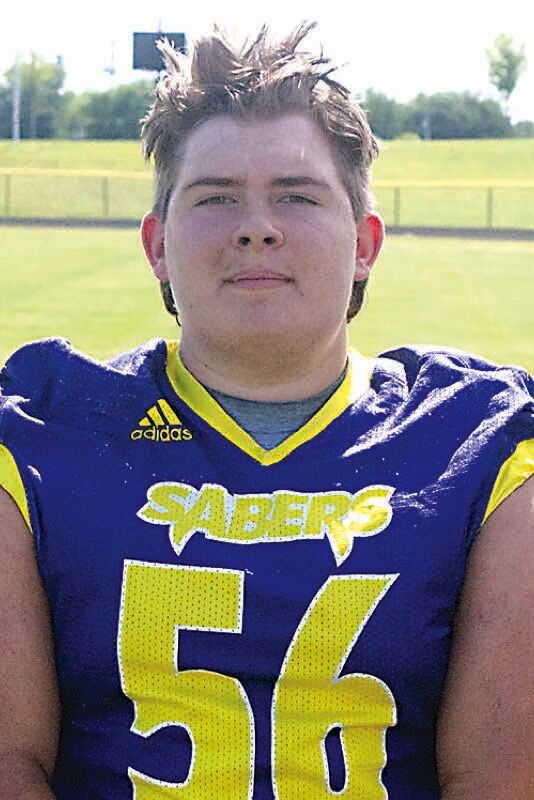 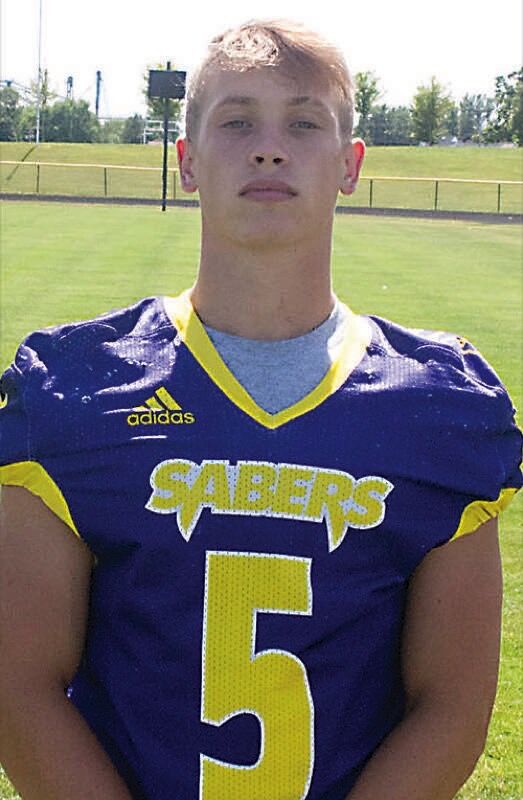 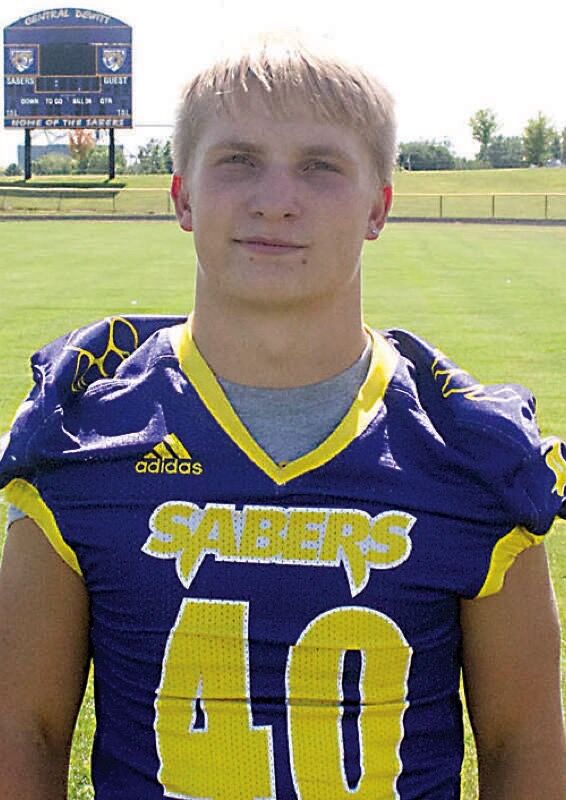 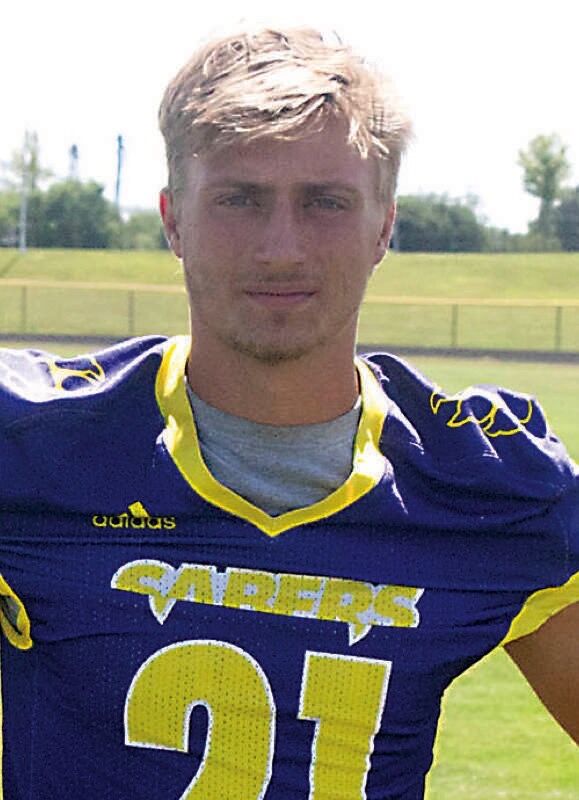 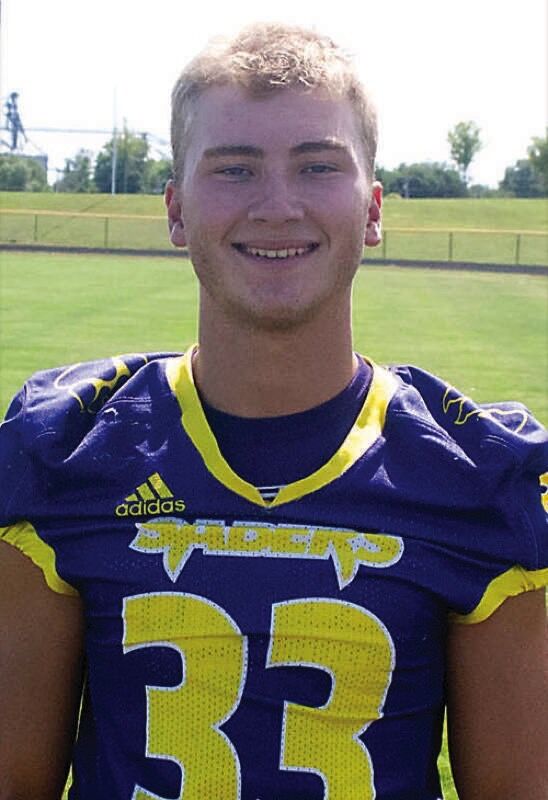 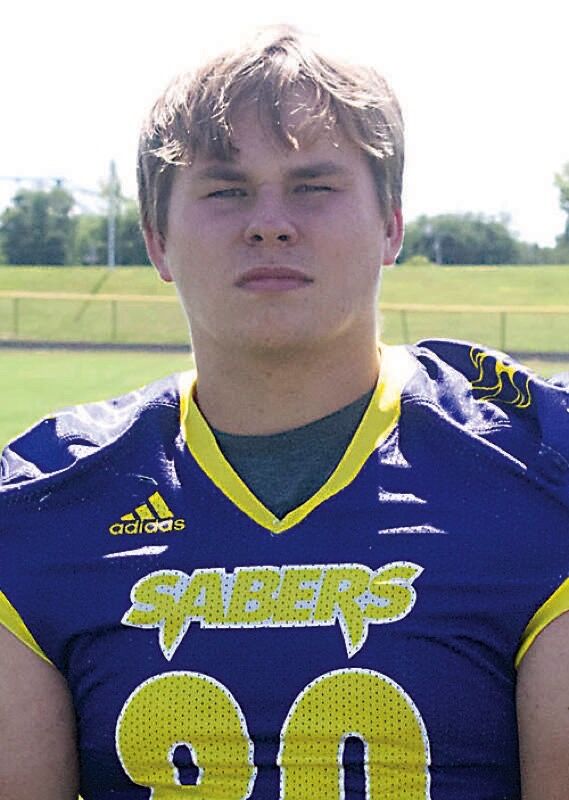 Two seasons ago, the Central DeWitt football team finished 12th in all of class 3A with 2,328 rushing yards.

Last year, the Sabers showed their ability to move the ball through the air, passing for a school record 1,352 yards.

This fall, the Sabers leaned on both attacks — the run and the pass — and the result was its second winning season in three years.

Central DeWitt increased its rushing yardage from the previous season, racking up 1,434 yards on the ground, while nearly matching last year’s record-breaking air attack (the Sabers had 1,274 passing yards, just 78 off of last season’s total).

That balance helped the Sabers lead all of 3A District 4 with 1,506 yards of total offense during district play.

Central DeWitt, meanwhile, had 10 players — all of them seniors — recognized on the recently announced All-3A District 4 team.

That included a pair of superlative honors on special teams as senior Henry Bloom, who also quarterbacked the Sabers offense, was named the district’s Punter of the Year, while teammate Kaiden Muhl shared Specialist of the Year honors with Marion’s Lucas Unsen.

Muhl was also one of four Sabers named to the first team of the all-district squad, joining fellow seniors Cole Miller, John McConohy and Tyson Belk.

Bloom led the district in punt yardage — 842 during district play — while also topping the field in yardage per punt among players who booted the ball at least five times.

The senior was also the district’s leading passer, throwing for 769 yards and six touchdowns — both tops in district action.

Bloom completed 39 of his 76 attempts in four district games — good for 51.3 percent — and averaged 19.7 yards per completion, while also rushing for 30 yards and another touchdown.

All told, the Saber completed 70 passes for 1,168 yards and nine touchdowns, while picking up 135 yards and four more touchdowns on the ground. Bloom also clinched the Sabers’ season opener with an interception on defense.

Muhl returned six kickoffs during his district campaign, amassing 119 yards on them, an average of 19.8 yards per return (that average rose to over 21 yards for the whole season). The senior also returned a pair of punts 21 yards.

That was part of a strong all-around season for the versatile senior.

Muhl led the district with 305 receiving yards during the five-game district slate. His two receiving touchdowns was good for a tie for first, while his 15 total receptions ranked second.

The Saber added 101 more yards on the ground, good for second on the team during district play.

For the whole season, Muhl hauled in a team-high 22 receptions for 380 yards —an average of 17.3 yards per catch — and the two touchdowns. He was also third on the team with 176 rushing yards with two more scores on the ground.

On defense, Muhl had seven tackles in district action, two of them being solo, and intercepted a pass during the Sabers’ contest with Dubuque Wahlert.

That was the second interception of the season — tied for tops on the team — for the senior, who also had one in the Sabers’ season opener with Ottumwa. Muhl had 19 tackles during the course of the whole season with 12 solo stops.

McConohy also proved to be a versatile piece for the Sabers.

On offense, he rushed 15 times in district play for 65 yards — an average of 4.3 yards per carry (that average grew to 5.5, 180 yards on 33 carries over the course of the whole season) — and also hauled in a pair of receptions for 45 more yards (the senior finished the year with nine catches for 108 yards).

McConohy even stepped behind center when Bloom was sidelined with an injury, completing five passes for 99 yards and a touchdown in the Sabers’ district contest with Davenport Assumption.

On defense, McConohy was fourth on the team with 15 solo tackles during his district campaign. He finished with 25 total tackles in district play with 2.5 going for loss.

McConohy finished with 46 tackles total, while his 29 solo stops were tied for second on the team. He tied for the team lead with two interceptions and also had five tackles for loss.

Opposing offenses did not have much luck attacking the interior of the Sabers’ defensive line where Miller and Belk called home.

Miller racked up 13 tackles during district play with five solo stops and 1.5 going for loss. Over the whole season, the senior collected 22 stops, half of them solo, and four tackles for loss. He also recovered a fumble.

Belk picked up 14 tackles of his own during district action with six of them being solo. Add in the non-district and postseason games and Belk piled up 30 tackles with 14 solo tackles and two for loss.

Both players also played key roles on the Sabers’ offensive line. Belk was the team’s center, while Miller lined up at left tackle.

The duo’s work in the middle of the defensive line also freed up space for another duo, Scheer and Peterson, to make their presence known on defense.

No player had more solo tackles during the district campaign than Scheer, who finished with 21 of them.

That was part of a 34-tackle performance during district action for Scheer, who also led the team with 4.5 tackles for loss in district play and had half a sack.

In the Sabers’ full nine-game slate, Scheer had a team-high 47 tackles with 29 solo tackles, six tackles for loss and the half sack.

Peterson tied McConohy for third among Sabers with 25 tackles during district action with 13 solo stops and 1.5 tackles for loss. The senior also intercepted a pass during the Sabers’ district victory over Clinton, returning it 15 yards.

Peterson finished his senior season with 44 tackles, of which 26 were solo. He tied for second on the team with a sack and had 2.5 tackles for loss.

The Saber made a similar impact on special teams as Central DeWitt’s kicker.

Peterson made a pair of field goals — with a long of 38 — and finished 22-of-25 on his point-after tries. The senior averaged over 46 yards on his 36 kickoffs as well with three touchbacks.

The Sabers’ rushing attack this fall was spurred by Sailor, who led the team — and finished fourth among 3A District 4 players — with 313 yards on the ground during district action.

Sailor scored a pair of rushing touchdowns during that five-game district slate and was also a weapon in the Central DeWitt passing game, grabbing seven passes for 125 yards and two more touchdowns.

Over the course of the entire season, Sailor carried the ball 112 times and amassed 695 yards on the ground — 6.2 yards per carry — while scoring eight touchdowns.

He added 10 receptions for 161 yards and the two touchdowns.

Defensively, Sailor had 23 tackles with 14 solo stops and 1.5 for loss with an interception in the Sabers’ playoff game with Clinton (Sailor had 12 of those tackles in district play with eight of them being solo).

Coming up with his own big interception in that playoff game with the River Kings was Kinney, who returned his takeaway 37 yards for a touchdown.

That was just part of an impactful season the senior put together on the defensive end.

Kinney finished his senior campaign with a team-high 33 solo tackles and ended it with 42 tackles overall. The senior also had seven tackles for loss, which was another team-high.

Four of those tackles behind the line of scrimmage came during district play, while 16 of Kinney’s 19 tackles during his district campaign were solo.

On offense, Kinney earned some early carries and picked up 38 yards on the ground.

Also wreaking havoc behind the line of scrimmage was Schnede. The defensive end led the Sabers with a pair of sacks and had three tackles for loss among his 17 tackles (six of them solo).

Both of Schnede’s sacks came during district play, tying him for third among 3A District 4 players as the senior had 12 tackles.

Schnede also gave Bloom another talented receiving target. He had three receptions during district play — for 70 yards — and two of them went for touchdowns.

Schnede finished with five receptions during his senior campaign, good for 108 yards and three touchdowns.

Red Report: Huskers can't be 'loose' with the ball; take what you can get; how the QB decision is made

Thank you for supporting the Small Businesses you LOVE!

Surprise your Christmas Cutie with their picture in the Wednesday, Dec. 16th Observer. All of the children's photographs along with family information will be placed on consecutive pages in alphabetical order. Just click on the button below to complete the form. The cost is $7 per child.

Partly cloudy skies in the morning will give way to cloudy skies during the afternoon. High near 45F. Winds NW at 15 to 25 mph. Higher wind gusts possible.