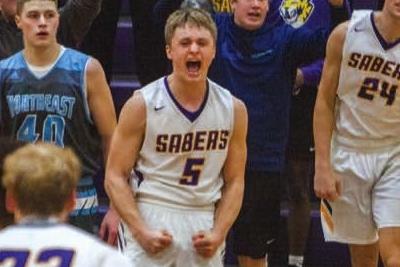 Central DeWitt senior Zach Hinkle lets out a roar after his offensive put-back beat the buzzer in overtime of the Sabers’ 59-57 victory over Northeast Saturday night. Hinkle’s game-winner gave him 15 points and capped a wild contest that saw both squads hit game-tying threes in the final 20 seconds of regulation and overtime. 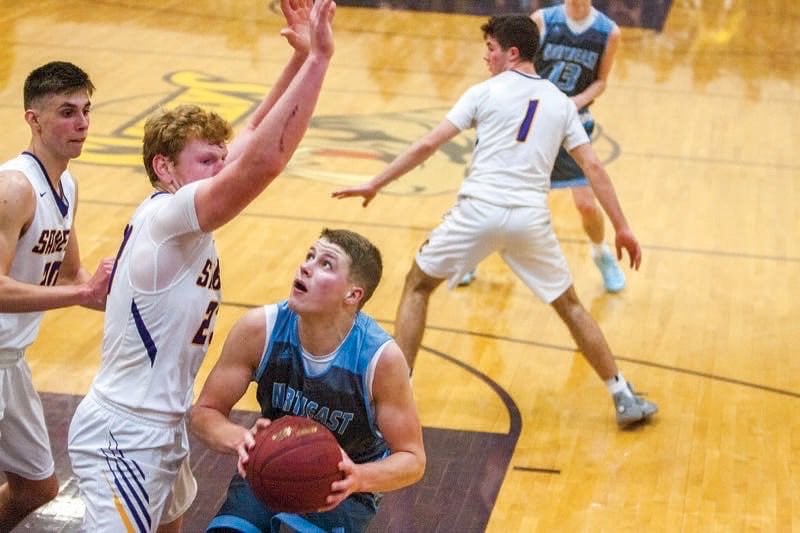 Northeast junior Judd Swanton looks for an opening inside during the fourth quarter of Saturday’s Observer-area clash with Central DeWitt. Swanton led the Rebels with 17 points and grabbed 13 rebounds for a double-double.

Central DeWitt senior Zach Hinkle lets out a roar after his offensive put-back beat the buzzer in overtime of the Sabers’ 59-57 victory over Northeast Saturday night. Hinkle’s game-winner gave him 15 points and capped a wild contest that saw both squads hit game-tying threes in the final 20 seconds of regulation and overtime.

Northeast junior Judd Swanton looks for an opening inside during the fourth quarter of Saturday’s Observer-area clash with Central DeWitt. Swanton led the Rebels with 17 points and grabbed 13 rebounds for a double-double.

For most basketball players, making a pair of key three-pointers in a victory over the No. 1 team in Class 3A would be the definite highlight of your weekend.

For Central DeWitt senior Zach Hinkle, it was just the appetizer to an even bigger moment a day later.

Less than 24 hours after spurring the Sabers to a 10-point victory over top-ranked Marion, Hinkle turned a rebound into a put-back just before time expired to give Central DeWitt a wild 59-57 overtime victory over Northeast in an Observer-area classic Saturday.

The Sabers seemed to be in a good spot, holding a 52-45 lead with two minutes to go in regulation.

Rebels senior Trey McAleer, though, kicked off a 7-0 run to end the fourth quarter with a driving lay-up.

Judd Swanton added a pair of free throws with 32 seconds left and, after the Sabers missed the front end of a one-and-one, Cade Hughes caught a pass on the wing and buried a three with 17 seconds left to tie the game at 52.

Central DeWitt’s potential game-winning three was off the line and the two teams were headed to overtime.

The Sabers struck first in overtime on a Tucker Kinney hoop inside, but Grant Rickertsen answered with two free throws and Swanton made two of his own to give Northeast the lead.

Dakota Stevenson tacked on a final free throw to make it 57-54 with 36 seconds to go.

The Sabers’ first attempt to tie was off the mark, but a travel on the scramble for the rebound gave them another chance and senior Alex McAleer made the most of it, sinking a step-back three from the corner to tie things up.

There was still four seconds left, so the Rebels had a chance to inbound the ball and break the tie.

McAleer, though, stole the inbounds pass and put up another desperation three. The shot was off the mark, but landed right in the hands of teammate Logan Paulsen, who had been guarding the inbound passer.

With Swanton there to challenge the shot, Paulsen’s put-back banked off the rim, but right into the waiting arms of Hinkle who laid it in just before the buzzer for the winning points.

No lead lasted very long in the game, starting in the first quarter where both teams saw advantages — 5-2 for the Sabers, 9-5 for the Rebels — disappear.

Central DeWitt was able to create some separation late in the first half behind an 11-2 run, and entered halftime with a 27-21 lead.

The Rebels responded with a late surge to end the third quarter, picking up four straight points from Stevenson and a Swanton hoop to tie things at 35 heading to the fourth.

The Sabers scored the first five points of the fourth quarter, but Northeast scored the next five and then surged late to force overtime.

Hinkle’s buzzer beater gave him 15 points, tied with McAleer for the team-lead, while Kinney chipped in 14 points.

Swanton had 17 points for the Rebels and added 13 rebounds for a double-double.

Stevenson had 15 points and matched T. McAleer with five assists, while Hughes had 10 points, the last three on his game-tying trey in regulation.

The dramatic victory came on the heels of the Sabers’ second home upset of a top-ranked team this winter.

And just like its 58-55 win over then No. 1 Beckman Catholic, Central DeWitt started fast against 3A No. 1 Marion.

In fact, the Sabers scored the game’s first 12 points against the Indians, and led 18-10 after a quarter.

The visitors fought back, using a big run of their own — 11 straight points — to take their first lead at 21-20.

Junior Kaiden Muhl hit two big three-pointers during the second stanza to put the Sabers back in front and Central held a 30-27 lead at halftime.

The two teams traded the lead throughout the third quarter before junior Ben Mason gave the Sabers some late momentum with a buzzer-beating three.

Marion answered back to take the lead and the two teams were tied at 49 when the Sabers broke the game open with a 7-0 run.

Kinney bookended the run with two hoops inside. They sandwiched a Hinkle three and it was 56-49 Sabers.

The Indians ended the run with a hoop, but then left Hinkle alone behind the three-point line and the senior made them pay with another three to make it 59-51.

Marion never got any closer as three Henry Bloom free throws helped them finish a 62-52 victory.

Northeast also entered Saturday’s contest with momentum after it rallied past Bellevue the night before.

Down nine points at one point in the first half, the Rebels used tough defense in the second half to surge back.

The hosts allowed just 19 points after halftime and finally broke through late, scoring nine of the game’s final 11 points to take home a 49-45 victory.

The Comets scored the first six points of the second quarter to take a 21-12 lead, but then found themselves stuck on 21 points for the next four minutes of action.

That helped Northeast cut the lead to two and the game was close the rest of the way.

It was a four-point game heading to the fourth (35-31) and Bellevue led 43-40 with three minutes to play when the Rebels rallied, scoring the game’s next four points to take the lead and making it hold up.

Swanton again led a trio of Rebels in double figures with 12 points (he also had seven rebounds), while Stevenson and Hughes both had 10 points.

Rickertsen joined Swanton with seven rebounds and both players dished out three assists. Swanton had four steals and two blocks as well.

One Stop Shop for Farm and Crop