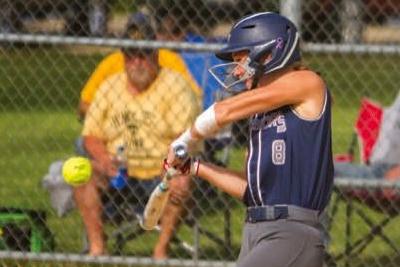 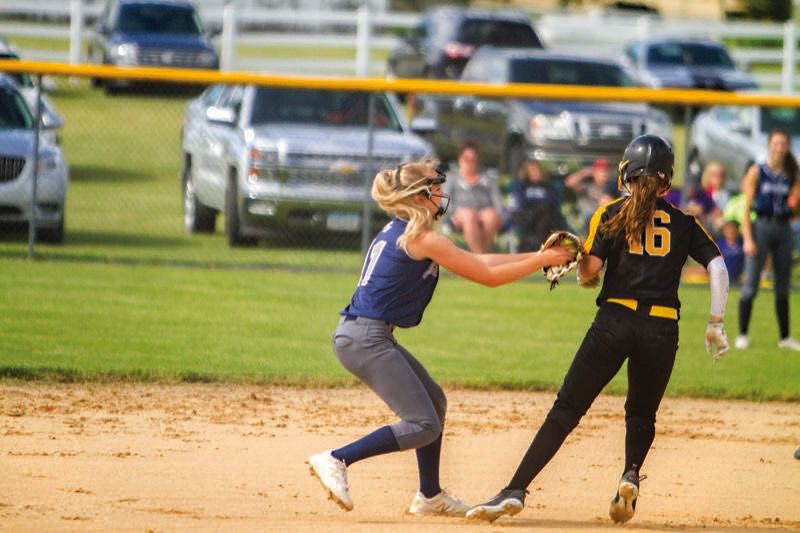 Warriors senior Kaylie Wilhelm tags out a Maquoketa Valley base runner during the first game of a doubleheader with the Wildcats.

Warriors senior Kaylie Wilhelm tags out a Maquoketa Valley base runner during the first game of a doubleheader with the Wildcats.

CALAMUS — Its early lead did not hold up in the opener, so the Calamus-Wheatland decided to give its first-inning run in the nightcap of Tuesday’s doubleheader with Maquoketa Valley some company.

For the second straight game, the Warriors struck early and this time they added to their advantage, plating two runs in the fourth and a final run in the sixth for a 4-1 win and a split (the Wildcats took the opener 3-1).

After a 1-2-3 top half of the first, the Warriors needed just three batters to take the lead as Addy Widel reached base and took second on an error before ultimately scoring on a double by Alison Boeckmann.

The Warriors threatened again in the fourth. Seniors Addison Luepker and Kaylie Wilhelm hit back-to-back singles to open the inning, while Isabel Shockey walked to load the bases.

That brought up Hannah Peña, who came through with her own single to plate Luepker and Wilhelm and make it 3-0.

Maquoketa Valley cut into the lead in the top of the sixth, but three straight hits in the bottom of the frame — singles by Shockey, Peña and Widel — helped the Warriors wrap up their victory with a final run.

Peña had a team-high two hits and drove in two runs, while Widel, Boeckmann, Luepker, Wilhelm and Shockey had individual hits.

Boeckmann spread out nine hits, but allowed just the single run and matched that with one strikeout.

The Warriors struck early in the opener as well. Just as she would do in the nightcap, Boeckmann belted a first-inning double and this time scored the run herself on a single by Emily Boeckmann.

Cal-Wheat added seven hits the rest of the way, but could not add to its opening salvo.

That allowed Maquoketa Valley to surge in front with two runs in the fifth and add an insurance run in the seventh.

A. Boeckmann went 3-for-4 at the plate, while E. Boeckmann and Raven Knoche both had two hits.

Two quick starts hurt the Warriors in a second Tri-Rivers doubleheader two days later with 1A No. 15 Central City.

The hosts — also named the Wildcats — erupted for 11 runs over the first two innings of an 11-1 win in the opener and then took an early 2-0 lead in an eventual 7-0 victory in the nightcap.

The Warriors had half of their four hits in the fifth inning of game one with one of those hits — a single by Widel — bringing in Wilhelm for a run.

Widel, A. Boeckmann, Luepker and Shockey all had hits for the Warriors.

Cal-Wheat found more success at the plate in the nightcap, producing a base runner in every inning but the first and finishing with seven hits, but could not get that key hit to bring in a run.

E. Boeckmann accounted for nearly half of the hits, going 3-for-3 at the plate, while Widel, A. Boeckmann, Wilhelm and Shockey all had individual hits.

The Warriors closed their first week of action with a non-conference visit to Clinton.

Unfortunately, a big fourth inning for the River Queens proved costly as the hosts broke open a 3-0 lead with seven runs in the frame in an eventual 12-2 win.

The Warriors scored both of their runs in the fifth. Shockey singled and was sacrificed over to second by Peña before scoring on a Widel single.

The process repeated itself with Widel being sacrificed over — by Alyssa McElmeel — before scoring on a single by A. Boeckmann.

A. Boeckmann was 3-for-3 with an RBI, while Widel added two hits, an RBI and a run scored.

The Back Page — Episode 4 with special guest Caitlin Lowe

Mixed clouds and sun with scattered thunderstorms. High near 85F. Winds WSW at 10 to 15 mph. Chance of rain 50%.