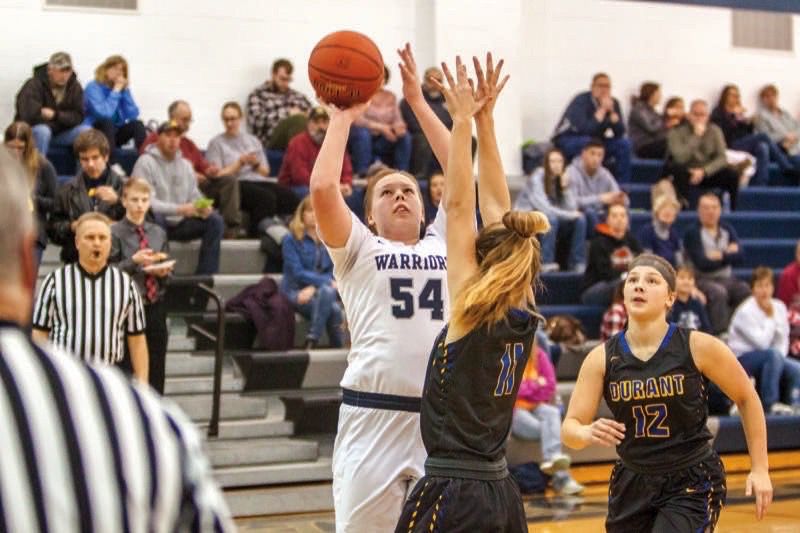 Calamus-Wheatland senior Hannah Tack rises up for a shot inside during the first half of Monday’s non-conference contest with Durant. Tack had a career-high 20 points and matched that with 20 points to help the Warriors rally back from an 11-point deficit to top the Wildcats, 50-48, in overtime. 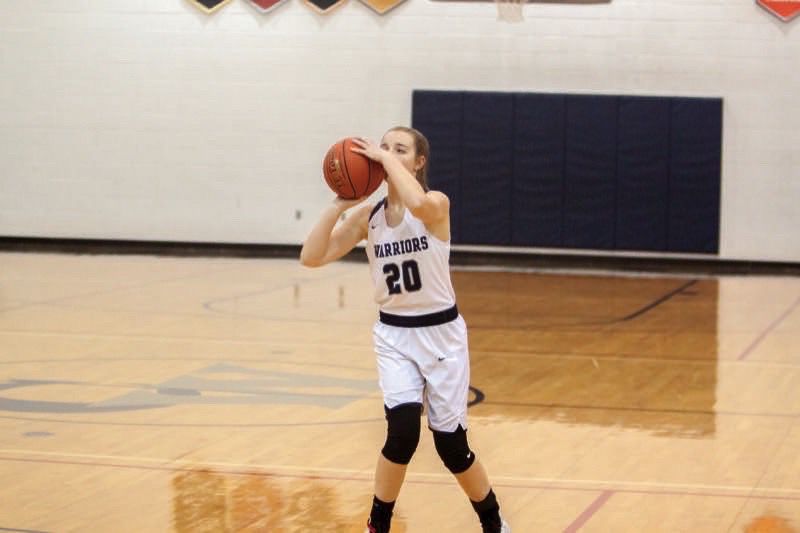 Warriors sophomore Addy Widel lines up a three-pointer during the first half of Monday’s overtime victory over Durant. Widel hit a pair of threes and finished with eight points in the win.

Calamus-Wheatland senior Hannah Tack rises up for a shot inside during the first half of Monday’s non-conference contest with Durant. Tack had a career-high 20 points and matched that with 20 points to help the Warriors rally back from an 11-point deficit to top the Wildcats, 50-48, in overtime.

Warriors sophomore Addy Widel lines up a three-pointer during the first half of Monday’s overtime victory over Durant. Widel hit a pair of threes and finished with eight points in the win.

So, it only seemed fitting that it would be that same Warriors defense which helped the hosts eventually catch and pass the Wildcats.

Down 33-22 at the half, the Warriors limited Durant to just 12 points in the second half, setting up a late charge that forced overtime.

And with the momentum on its side, Cal-Wheat outscored the Wildcats, 5-3, in the extra period to bring home a 50-48 victory.

Durant made seven shots from the floor during the second quarter to transform a 15-14 lead into an 11-point halftime advantage.

The Wildcats, however, made just six shots the rest of the way, shooting 6-of-30 from the field after halftime.

Cal-Wheat took advantage. The Warriors scored the first six points of the third quarter, all of them coming from senior Hannah Tack.

Durant responded with four points of its own, but Karragan Whitman followed up a teammate’s miss with a put-back and Addy Widel made a three, making it 37-33.

The visitors reclaimed some late momentum with a jumper to finish the quarter ahead by six, but it did not last long.

Instead, Tack opened the fourth quarter with a hoop and Addison Luepker splashed in a three-pointer to make it a one-point game.

Durant fired back with a three, but Alison Boeckmann knocked down a free throw and Luepker turned a steal into a lay-up.

Tack, meanwhile, scored down low to give the Warriors their first lead since the opening quarter.

The advantage did not last long: Durant hit a three-pointer on its next trip down the floor.

The Warriors’ response, though, was just as quick with Luepker finding a cutting Tack for a lay-up with just over a minute to go.

Both teams had opportunities to break the tie, but none came to fruition, sending the game to overtime.

Cal-Wheat was not out of the clear yet. Durant scored inside to pull within one in the final minute and had an attempt for the lead rim out.

Luepker, though, pushed the lead back to two with a free throw and a desperation heave for three was off the mark.

Three-pointers lifted the Warriors early. Luepker made three of them herself in the opening quarter, while Widel added one of her own.

The Wildcats, though, opened the second quarter with a 10-2 run and erupted for 18 points overall in the quarter to set up the Warriors’ comeback.

Tack had an ultra-rare 20-20 game, scoring a career-high 20 points and adding 20 rebounds to pace the Warriors.

Luepker was right behind her with 19 points to go with a team-best three steals.

An overtime game was probably not the precursor the Warriors wanted before they headed to Winthrop less than 24 hours later for a Tri-Rivers Conference game with East Buchanan.

The fast-paced Buccaneers are ranked eighth in Class 1A and have used their relentless pressure to come away with 164 steals — tops in the entire state, regardless of class.

Ultimately, both defenses wreaked havoc, combining for 31 steals and 50 turnovers.

The Warriors, though, had a hard time getting their shots to fall from the floor, especially in the first half, where they shot 4-of-26 from the field.

The Buccaneers did not fare much better, shooting just under 39 percent from the field during the same stretch.

The hosts, though, outscored the Warriors, 36-14, in the first two quarters and carried that advantage to a 54-32 victory.

Tack led the Warriors again with eight points and 10 rebounds, and came up with six steals for good measure.

Emily Knudtson chipped in seven points, while Widel and Boeckmann both had six points.

The former scored her six points on a pair of threes, while the latter grabbed eight rebounds and had four steals. Whitman, meanwhile, again paced the team with three assists.

Recruiting Ticker, Jan. 21: Another busy junior day ahead for Huskers