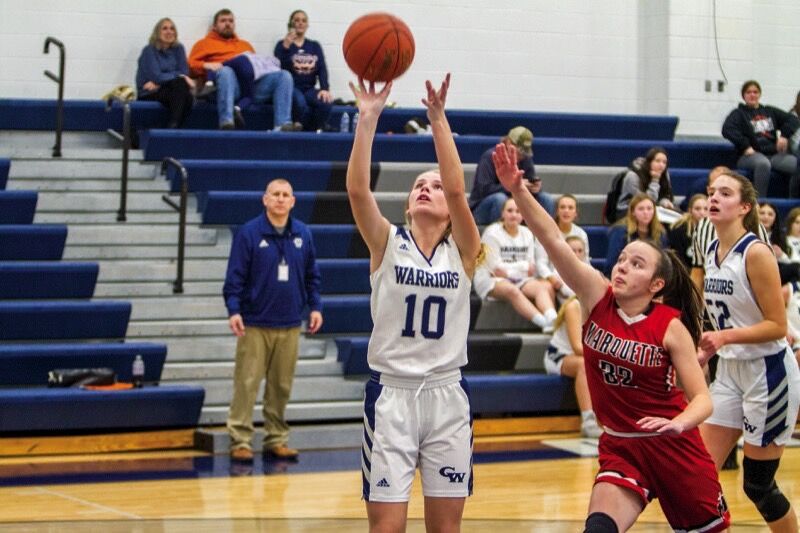 Calamus-Wheatland senior Camryn Schnede attempts a shot during the second half of the Warriors’ 2022 opener with Marquette Catholic, Tuesday. Schnede had both five rebounds and four assists in a 51-37 victory. 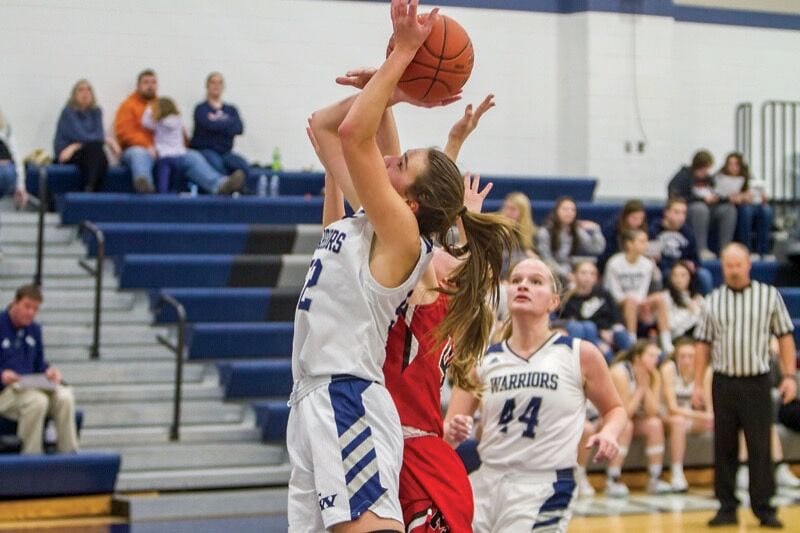 The Warriors picked up 24 points from sophomore Kahlie Hill to open the new year with a 51-37 victory over Marquette Catholic.

Calamus-Wheatland senior Camryn Schnede attempts a shot during the second half of the Warriors’ 2022 opener with Marquette Catholic, Tuesday. Schnede had both five rebounds and four assists in a 51-37 victory.

The Warriors picked up 24 points from sophomore Kahlie Hill to open the new year with a 51-37 victory over Marquette Catholic.

WHEATLAND — Playing its first game in two weeks, it took some time for the Calamus-Wheatland girls basketball team to shake off some of the rust of holiday break.

But behind their defense and work on the offensive glass, the Warriors were able to get back up to speed in Tuesday’s home contest with Marquette Catholic.

After combining with the Mohawks for just 10 points in the opening quarter, Cal-Wheat took over during the final three stanzas, dropping in 18 points in both the second and fourth quarters to bring home a 51-37 victory.

Both teams struggled to find their shooting touch from the field: the Warriors made just one-third of their 48 attempts and they were the better shooting team as Marquette made just under 33 percent of their shots.

Cal-Wheat, though, gave themselves second opportunities with 16 offensive rebounds and consistently disrupted the Mohawks offense with active hands that led to 17 deflections and eight steals.

The two teams split the game’s first 12 points — Cal-Wheat led 6-4 after a quarter, Marquette scored first in the second stanza — before the Warriors seized control of the game with an 18-2 run.

The Mohawks broke things up with a hoop, but Kahlie Hill scored inside and Boeckmann added a free throw before Connelly made it 24-8 with her bucket.

Marquette did finish off the first half scoring with a three-point play and some of that momentum carried over into the third quarter as the Warriors hit another cold spell, shooting 3-of-11 in the stanza.

That allowed the Mohawks to eat into their deficit, getting as close as six at one point before trailing by seven (33-26) heading into the fourth.

Cal-Wheat, though, made sure a potential rally stopped there by working the ball inside.

Hill knocked down her own free throws and then completed a three-point play to cap a 12-0 run that pushed the margin to a game-high 19 points.

Hill scored 11 of her game-high 24 points in the fourth — she matched the Mohawks point-for-point in the quarter — and pulled down 11 rebounds for a double-double, while also coming up with two assists, two steals and a blocked shot.

Boeckmann added seven points and led the team with five assists and three steals, while Widel and Knudtson both had six points. The former joined Hill with two steals, while the latter grabbed seven boards.