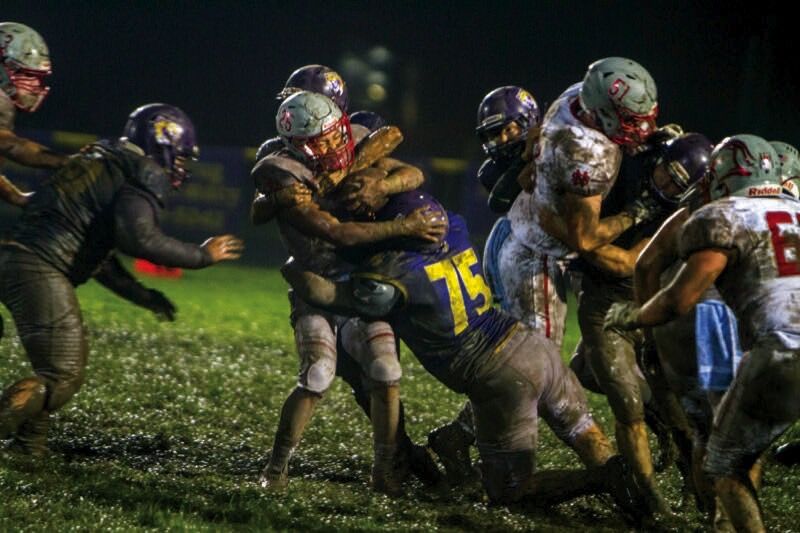 Central DeWitt junior Mitchell Howard (75) joins his teammates in wrapping up the North Scott ballcarrier during the second half of Friday’s homecoming game with the Lancers. Yards were hard to come by as a week’s worth of rain made the field slick and muddy. Howard had a pair of solo tackles, but North Scott scored the game’s only points in a 7-0 victory. 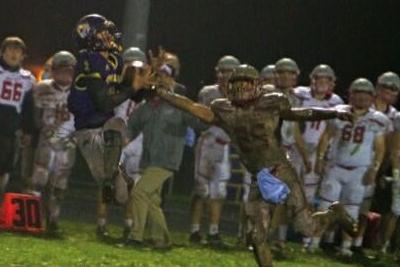 Central DeWitt junior Mitchell Howard (75) joins his teammates in wrapping up the North Scott ballcarrier during the second half of Friday’s homecoming game with the Lancers. Yards were hard to come by as a week’s worth of rain made the field slick and muddy. Howard had a pair of solo tackles, but North Scott scored the game’s only points in a 7-0 victory.

The field was chewed up, the ball was hard to hold on to, the mud was everywhere.

In Friday night’s homecoming showdown with North Scott, the Central DeWitt football team found itself in a throwback to football lore.

All that seemed to be missing were the leather helmets.

The Sabers and Lancers, who recently renewed their football meetings, would have made their oldest alumni proud with a contest dominated by defense, punts and mud. Lots of mud.

The two teams combined for more punts — 20 — than first downs — 11 — and neither team finished with even 150 yards of total offense.

With nothing coming easy, it was the Lancers’ ability to take advantage of a short field that turned out to be the difference.

After six punts to start the game, Central DeWitt’s fourth drive ended in a fumble which North Scott recovered on the Sabers’ 12-yard line.

The first two Lancers plays lost them a yard, but on the third, quarterback Grayson Juel connected with Jakob Nelson for a 13-yard touchdown.

They would be the only points of the game. The Sabers would get as close as the Lancers’ 22-yard line, but they would get no closer as North Scott made the touchdown hold up in a 7-0 victory.

The Sabers’ deep push into North Scott territory came early in the second half.

Central DeWitt kicked off to start the third quarter and then forced an early three-and-out.

The Sabers then caught a break as the North Scott punter went to a knee to secure the snap, downing the ball at the Lancers’ 22.

The hosts’ momentum, however, was short-lived as a big loss on first down pushed Central DeWitt back and the team was unable to recover, ultimately giving the ball back to North Scott.

Even so, the Sabers still made things interesting.

On three different occasions in the second half, they started drives with big plays. Senior Kaiden Muhl grabbed a 41-yard pass from quarterback Henry Bloom on the first play of the Sabers’ final drive of the third quarter and the two players connected again with a little under five minutes to play for a 35-yard pass.

That drive ended on downs, but the Sabers got the ball back one final time and made headway again as Bloom picked up 13 yards on a run, while a late-hit penalty netted 15 more. Knowing the Sabers needed to gain yards in a hurry, though, the Lancers pass rush pinned their ears back and a pair of sacks clinched the North Scott victory.

The rain wreaked havoc, especially early, and the two teams combined for eight fumbles in the game, though only three were lost.

All told, the first half featured three turnovers — the fumble that set up the Lancers touchdown, a North Scott fumbled punt that was recovered by Cael Grell, and a key interception for Sabers sophomore David Harper to stop a threatening Lancers drive — and 14 punts.

Bloom completed three passes, all of them to Muhl, for 83 yards. Garrett Sailor added 37 yards on the ground, while Bloom had 15 yards.

Connor Scheer led the way for the Sabers with eight tackles, including six solo stops, while Cody Penniston and Harper both had six tackles. Sean Kinney, Landon Peterson, Tyson Belk and Kaden Schnede all had four stops with Kinney collecting a pair of tackles for loss.

Things do not get easier for the Sabers as they welcome unbeaten Davenport Assumption to Birney Field Friday.

The Knights are ranked sixth in Class 3A and have won their first three games by an average of over 42 points, including a 42-0 shutout of Marion in both team’s district opener last week.

Assumption has done the bulk of its damage on the ground. The Knights are seventh in Class 3A with 764 rushing yards and second in the class with 15 rushing touchdowns.

Watch now: What it means to Josh and Daniel Imatorbhebhe to be reunited on the Illinois football team