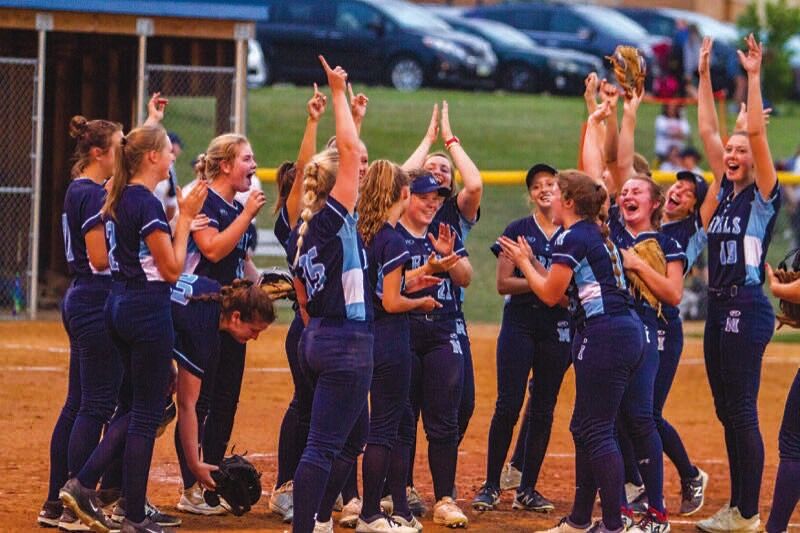 Members of the Northeast softball team celebrate the Rebels’ 2-1 victory over Iowa City Regina in Monday night’s 2A Region 7 final. Making the program’s first ever trip to the state tournament, the Rebels will take on Central Springs in a 2A state quarterfinal next Tuesday. 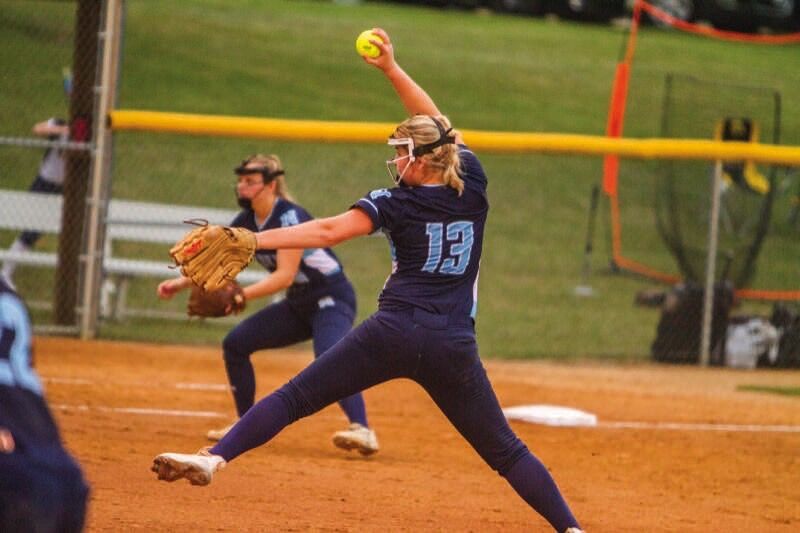 Rebels pitcher Madison Kluever winds up for a pitch during the sixth inning of Monday’s 2A regional final with Iowa City Regina. Kluever surrendered just three hits and struck out nine Regals in Northeast’s 2-1 victory, while driving in both of the Rebels’ runs with a two-run home run. 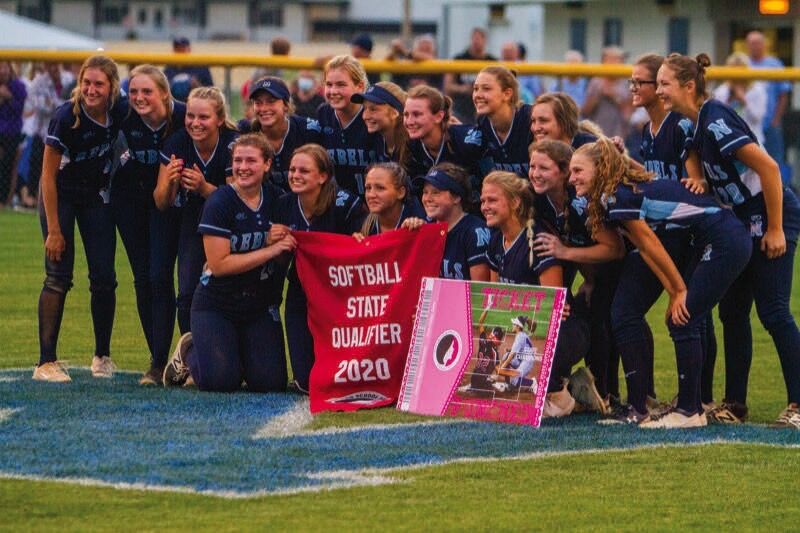 Members of the Northeast softball team celebrate the Rebels’ 2-1 victory over Iowa City Regina in Monday night’s 2A Region 7 final. Making the program’s first ever trip to the state tournament, the Rebels will take on Central Springs in a 2A state quarterfinal next Tuesday.

Rebels pitcher Madison Kluever winds up for a pitch during the sixth inning of Monday’s 2A regional final with Iowa City Regina. Kluever surrendered just three hits and struck out nine Regals in Northeast’s 2-1 victory, while driving in both of the Rebels’ runs with a two-run home run.

GOOSE LAKE — It has been a summer far from ordinary.

So, the Northeast softball team went out and did something extraordinary, too.

For the first time in program history, the Rebels are headed to the state softball tournament, courtesy of a 2-1 victory over Iowa City Regina in Monday’s 2A Region 7 final.

Northeast, the fourth seed, will make its state debut Tuesday morning at 11:30 a.m. at Harlan and Hazel Rogers Sports Complex in Fort Dodge when they face fifth-seeded Central Springs.

Just like the summer itself, the meeting between the Rebels and Regals was certainly unique.

Fresh off 10-run victories in its first two postseason games, Northeast found itself in a low-scoring affair that featured just nine combined hits.

That kept the game moving as the two teams finished six-and-a-half innings of action in about an hour.

And in a contest built on controlling nerves and handling growing tension, it was an eighth-grader who made the biggest impact.

Rebels pitcher Madison Kluever kept the Regals off balance all night, allowing just three hits — just one after the first inning — while striking out nine batters. The ninth strikeout proved to be the most important one as it also was the final out of the game, clinching the victory and setting off a big celebration.

The Regals turned two of their hits into a first-inning run, but Northeast answered in the bottom of the second.

Junior Valerie Spooner kept the inning alive with a two-out bloop single to bring up Kluever, who helped her own cause by taking an Emma Nibaur fastball and depositing it over the fence for a two-run home run that turned out to be the game’s winning runs.

Kluever made sure of it, she allowed just one base runner over the final five innings and retired the final 11 Regals she faced.

The Rebels tried to give her some extra breathing room, they put runners on third base in both the fourth and sixth innings, but Nibaur had her own strong night and escaped both situations.

Regina, however, had no answers at the plate. Right fielder Kayelee Hansen ran down a Nibaur line drive to open the seventh, Kluever induced a groundout to shortstop Alexis Ehlers and then nailed down the final out herself to clinch the historic victory.

The Rebels had five hits with senior Claire Abbott leading the way with two. Audrey Morris and Spooner added singles of their own, while Kluever had the big home run.

Northeast rolled into the regional final on the heels of two high-scoring victories over Clayton Ridge and Beckman Catholic.

A monster second inning helped the Rebels end things early against the Eagles on Wednesday as the hosts erupted for 10 runs, thanks in part to separate home runs by Kluever and Ehlers (who had already scored once in the inning). Northeast ended up scoring in all four innings it batted to roll to a 14-2 victory in four innings.

Both Morris and Ehlers had two hits in the victory with the latter slugging both a double and a home run, while driving in a team-high four runs (Morris hit a double as well). Neveah Hildebrandt and Claire Abbott joined Morris and Ehlers by scoring two runs, while Paige Holst slammed a triple.

Two nights later, the Rebels got a small dose of revenge when they knocked Beckman Catholic, 16-6, in the semifinals.

Facing the same squad that had ended its season in the same round a year earlier, Northeast came out hot against the Blazers, rattling off five runs right away in the first inning.

Beckman, though, answered the Rebels’ opening salvo and punched right back in the second inning, plating four runs of their own to tie things up at five.

Northeast, though, regrouped and continued to hit the ball. Kluever again set the tone, belting a bases-clearing double in the fourth that gave the lead back to the Rebels.

It was also the first of four extra-base hits Northeast would hit over the next three innings. Bree Mangelsen and Ehlers slugged doubles of their own in the fifth, while Abbott socked a triple in the sixth.

All told, the Rebels scored 11 runs over the fourth, fifth and sixth innings to turn what had been a 5-5 tie into a 16-6 rout that ended before the seventh inning.

The Rebels piled up 17 hits with Makenna McDonald, Ehlers and Spooner all coming up with three, while Hildebrandt, Mangelsen and Kluever also had multiple hits. Mangelsen sparked Northeast’s fast start with a home run and she joined Kluever for the team lead with four RBIs. Ehlers and Spooner each drove in three runs with Morris and Ehlers both scoring three runs.

Scattered thunderstorms in the morning, then mainly cloudy late. High 86F. Winds S at 10 to 20 mph. Chance of rain 50%.