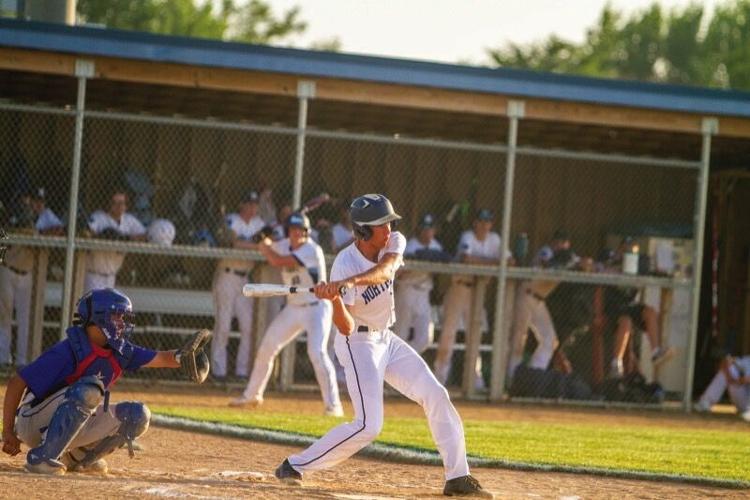 Northeast senior Caleb Gruhn begins to swing at an approaching pitch during the Rebels’ home contest with West Liberty Tuesday. 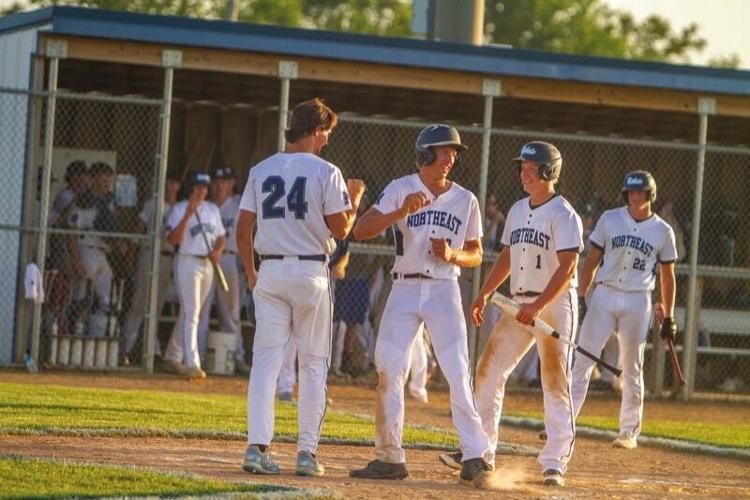 Gruhn socked a triple against the Comets and added a wild error-driven inside-the-park home run (the Rebel's reaction seen above) in Northeast’s 15-4 win. The victory came a night after Gruhn scored the winning run — after another triple — in a 5-4 victory over Camanche.

Northeast senior Caleb Gruhn begins to swing at an approaching pitch during the Rebels’ home contest with West Liberty Tuesday.

Gruhn socked a triple against the Comets and added a wild error-driven inside-the-park home run (the Rebel's reaction seen above) in Northeast’s 15-4 win. The victory came a night after Gruhn scored the winning run — after another triple — in a 5-4 victory over Camanche.

CAMANCHE — The Northeast baseball team has been no stranger to close games as it has battled the top teams in the River Valley North.

But the Rebels have had a tougher time turning those close encounters into victories, being on the wrong side of five games — all against North foes — that had been decided by two runs or fewer.

Northeast, though, bucked that trend Monday, breaking a 4-4 tie with hosting Camanche in the fifth inning and holding onto that advantage for a 5-4 victory.

The Rebels answered when the Storm struck first with two runs in the second inning, pushing across four of their own in the top of the third.

Northeast showed its patience at the plate with Isaiah Espey, Kael Parson and Cade Hughes each coaxing walks to load the bases for Caleb Gruhn, who slugged a two-run double.

Clayton Meyermann followed with a single to drive in two more runs and the Rebels were in front 4-2.

Camanche fired back, scoring two more runs in the bottom of the inning to bring the two teams even.

After a scoreless fourth, the Rebels broke the tie.

Gruhn, fresh off his double in the third, did himself one better, clubbing a one-out triple. A batter later, the senior came home on a groundout by Meyermann to put Northeast back in front.

The Rebels stayed there, as pitcher Jimmy Weispfenning allowed just one Camanche hit — a lead-off single in the seventh that was answered by back-to-back strikeouts — over the final three innings. Weispfenning spread out seven Storm hits over his seven innings of work, while finishing with six strikeouts.

Gruhn had half of the Rebels’ four hits and matched them with two runs scored and two RBIs. Meyermann, meanwhile, paced the Rebels with three RBIs.

Things were more comfortable a day later as Northeast scored at least three runs in all four innings it batted in a home 15-4 victory over West Liberty.

Already up 3-0 after an inning, the Rebels broke things open with a six-run second frame that saw them bring 11 batters to the plate.

Northeast had a dozen hits in the game: Hughes led the way with three, while Parson and Gruhn both added two. Gruhn drove in five runs in the game with Parson and Hughes each scoring three times (Gruhn, Hayden Lee and Chase Christiansen all had two runs).

Big innings proved to be the Rebels’ undoing in setbacks to 2A No. 3 Cascade on Wednesday and Iowa City Regina on Thursday.

The state-ranked Cougars scored seven runs across two innings to stake themselves to a 7-1 lead in an eventual 7-3 victory.

A day later, the hosting Regals broke open a close 2-1 game with six runs in the fourth inning of a 11-1 win.

Northeast, however, was limited to three singles — one each by Weispfenning, Meyermann and Lee — over the course of the game.

Parson hit a two-run double for the Rebels in the sixth inning against the Cougars, but Northeast could not get any closer.

Lee paced the team with two hits, including his own double, while Meyermann and Espey joined Parson with individual hits. Weispfenning, Lee and Gray had the Rebels’ runs.

Some clouds this evening will give way to mainly clear skies overnight. Low 53F. Winds WNW at 10 to 20 mph.