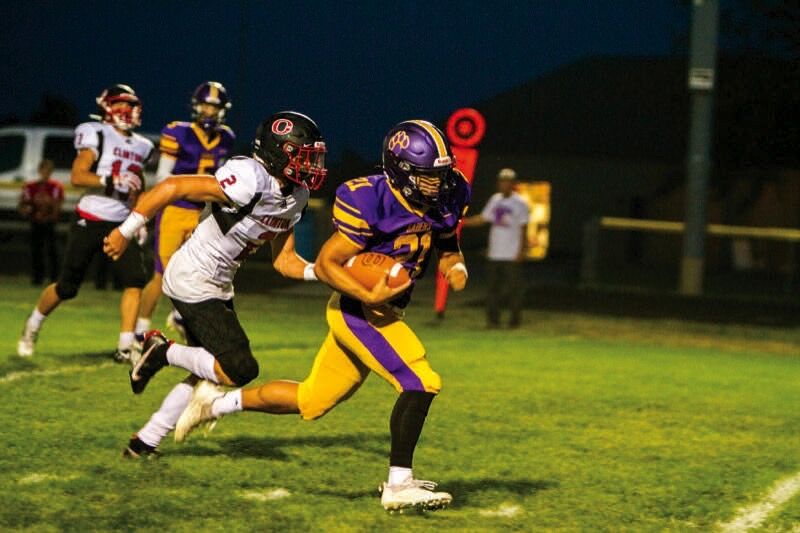 Central DeWitt junior Ben Pace breaks into the clear during the first quarter of Friday’s non-district meeting with Clinton. Pace streaked 27 yards for a touchdown, the first of three rushing scores on the night for the Saber, who finished with 61 yards on the ground in the Sabers’ 44-28 victory. 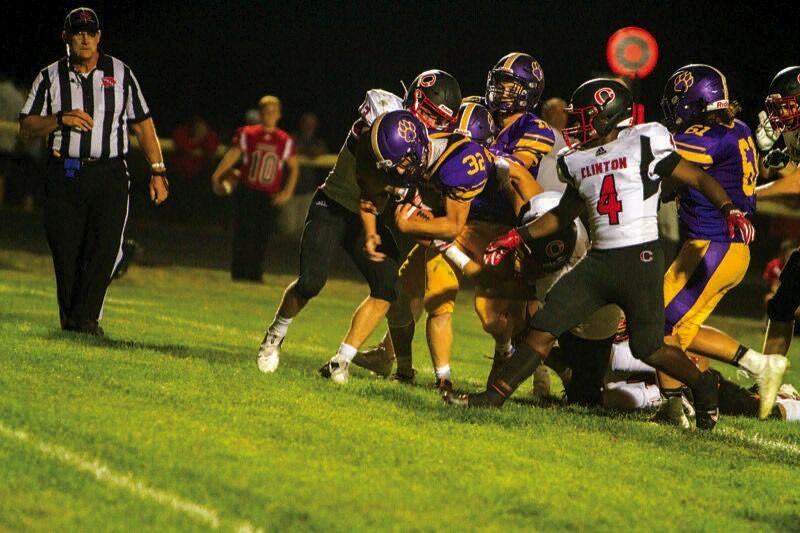 Central DeWitt sophomore Lane Gerard churns forward for more yards near the goal line as the pile moves forward during the first half of the Sabers’ victory over Clinton. Gerard led the Sabers with 62 yards and wrapped up his team’s 44-point output with a three-yard touchdown plunge.

Central DeWitt junior Ben Pace breaks into the clear during the first quarter of Friday’s non-district meeting with Clinton. Pace streaked 27 yards for a touchdown, the first of three rushing scores on the night for the Saber, who finished with 61 yards on the ground in the Sabers’ 44-28 victory.

Central DeWitt sophomore Lane Gerard churns forward for more yards near the goal line as the pile moves forward during the first half of the Sabers’ victory over Clinton. Gerard led the Sabers with 62 yards and wrapped up his team’s 44-point output with a three-yard touchdown plunge.

With the way its offense was moving the ball, all the Central DeWitt football team needed to take control of Friday’s non-district contest with Clinton was the ball to bounce its way.

In the third quarter, it did just that, both figuratively and literally.

Knotted up at 22-22 with the River Kings at halftime, the Sabers took the opening kickoff of the second half and needed just six plays to go in front.

Central DeWitt’s ensuing kickoff, meanwhile, took a perfect bounce, right between a Clinton player’s legs, which allowed senior Tyler Herington to pounce on the live ball and give it right back to the Sabers.

The hosts made sure the turnover hurt, scoring again, this time in just four plays.

The two quick scores — and two two-point conversions — gave the Sabers a 16-point lead and that proved to be the final margin in the Sabers’ 44-28 victory, giving Central DeWitt its first 3-0 start since 2008.

Only turnovers could stop a Sabers offense that did not punt. Central DeWitt scored on six of its first eight drives and were in Clinton territory when fumbles ended their other two.

The Sabers opened the second half with a bang as quarterback Paul Kuehn hit senior receiver Lucas Burmeister for a 42-yard gain on the second offensive play of the third quarter.

A short loss, followed by a penalty, backed the Sabers up, but Kuehn kept the ball for a 12-yard gain and Ben Pace got over the goal line on 4th-and-goal to put the hosts in front (Pace added the two-point conversion on a reception to make it 24-16).

The ensuing kick by Alex Fuller bounced early before skipping low, allowing Herington to reach it first and bring the Central DeWitt offense back on the field.

Already starting on the Clinton 25, the Sabers got closer when the River Kings were flagged for a facemask and Central DeWitt used some misdirection to spring Burmeister for an eight-yard rushing touchdown. Pace added another two-point conversion and the lead had doubled to 32-16.

After forcing a punt, the Sabers were pushing for another score until their second fumble gave the ball back to the River Kings.

Clinton took advantage, striking for a rushing touchdown with under seven minutes to play.

The River Kings, though, were foiled on their two-point try, keeping it a two-possession game, and their onside kick failed to go the necessary 10 yards.

The Sabers offense, meanwhile, put the game away with their longest drive of the night. Central DeWitt ran 10 plays and milked over four minutes from the clock before Lane Gerard wrapped things up with a three-yard touchdown run on fourth-and-goal.

Both teams struck quickly to open the game: the River Kings took the opening kickoff and covered 60 yards in just six plays for a touchdown and two-point conversion; the Sabers answered back, using a 34-yard completion from Kuehn to Burmeister to set up a 27-yard scoring dash up the middle from Pace to make it 8-6.

Each team’s next possession ended in turnovers, as Sabers junior Sam Bloom pulled in an interception, but Central DeWitt suffered its first fumble giving the ball back.

Clinton took advantage, adding to their lead with a 12-yard touchdown pass, which — with the extra point — made it 15-6.

The Sabers answered back again. Gerard picked up a key third down on the ground and a play later, Kuehn found Burmeister for a 47-yard touchdown pass. Pace added a two-point conversion on the ground and Central DeWitt was within a point.

The Sabers defense, meanwhile, kept things rolling with a three-and-out to get the ball back to their offense.

This time, Central DeWitt spread the ball around: Gerard and Caden Ridgley both had 14-yard rushes, David Harper added a 23-yard reception and Pace capped off the drive with a two-yard touchdown run to give the Sabers their first lead (Pace struck again for two points to make it 22-15).

The Sabers forced a fourth down on Clinton’s next drive, but had a facemask penalty negate a sack and the River Kings tied things up on a 30-yard heave to the end zone with five seconds left (a pass the Central DeWitt coaching staff argued was released beyond the line of scrimmage).

After being held under 50 yards the week before, the Sabers’ rushing attack got back on track with 208 yards. Gerard led the way with 62 yards and a touchdown, while Pace was right behind him with 61 yards and three scores.

Kuehn added 45 and was 7-of-13 through the air with 180 yards and a touchdown to Burmeister, who hauled in four receptions for 134 yards.

Senior Cael Grell led the way on defense with seven tackles, including five solo stops and a sack. Burmeister added six tackles — he also had five solo tackles — with Tristan Rheingans and Carter Donovan both coming up with five. Bloom had an interception and joined Grell and James Adams with sacks.

The Sabers will wrap up their non-district slate Friday as they head to Marion to take on the newly-named Wolves.

Marion is looking for its first victory: the Wolves fell by a point to Clear Creek-Amana in week one (36-35) before dropping road contests with Cedar Rapids Washington (26-9) and Benton (28-6).

Other than a two-year stretch in 2018-19, the two squads have been regular opponents and the Sabers will look to repeat the result of last year’s meeting — a 27-24 victory.

'It cost us the game:' 'Punt right' proves to be punt wrong on a forgettable night for NU's punt unit