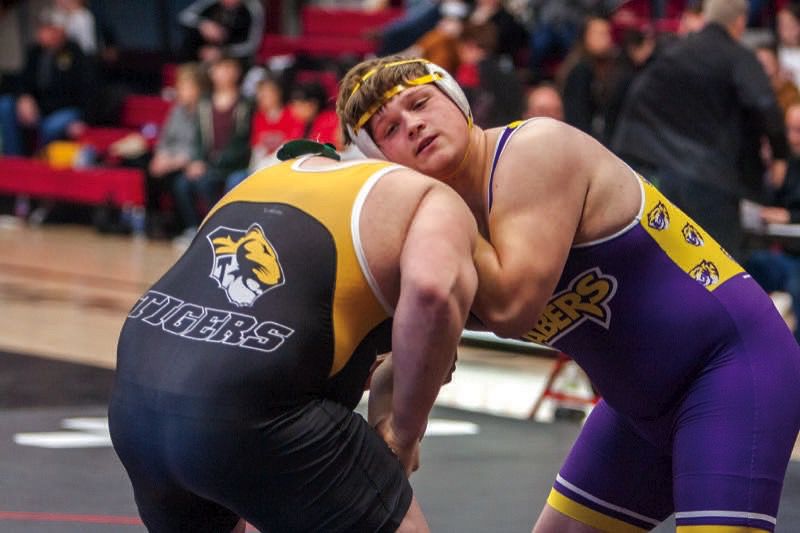 Central DeWitt junior Cole Miller pulls down on the head of Tipton’s Jesse Leiser as they fight for position during their finals match at 285 pounds at Saturday’s 2A Sectional 15 meet. Miller took down Leiser twice in the third period to pull away for a 6-2 victory to qualify for this Saturday’s 2A district meet at Washington. 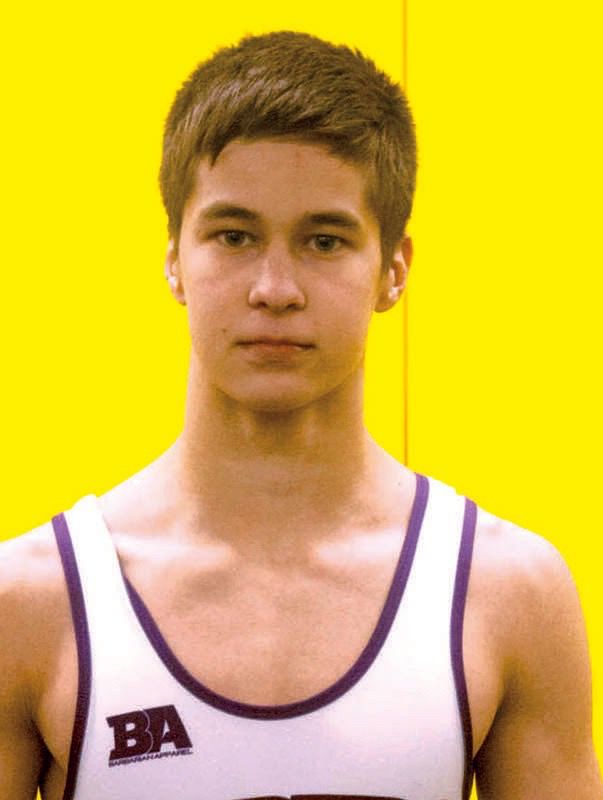 DAVENPORT — They sit on opposite sides of the Central DeWitt wrestling team’s lineup, but juniors Keaton Zeimet and Cole Miller will have the same goal at next Saturday’s 2A district meet.

A trip to the state wrestling tournament.

The two Sabers — Zeimet at 113 pounds, Miller at 285 pounds — accomplished the first leg of that journey Saturday, bringing home sectional championships at the 2A meet hosted by Davenport Assumption.

With its two champions and a trio of third-place finishers, Central DeWitt was sixth in the team standings with 131 points.

The hosting Knights qualified 11 wrestlers and took the team crown, while Camanche crowned four champions and was runner-up.

It was the third straight sectional title for Zeimet, who was dominant again en route to a championship at 113 pounds.

The Saber, who pinned his way to titles as a freshman and sophomore, rolled to a 15-0 technical fall over Tipton’s Brendan Nantz in the semifinal, earning 11 of those points on five different nearfall counts.

Miller, meanwhile, came up with a big takedown in the first period of his semifinal with Seth Schurr of Columbus Community.

The Saber added an escape in the second period and prevented Schurr from coming up with a takedown in the third period to secure a 3-0 victory.

Miller scored first in his finals match with Tipton’s Jesse Leiser as well, earning a penalty point for locked hands and then an escape in the second period to build a 2-0 lead.

Leiser answered with an escape in the third period, but Miller took advantage of the Tiger’s need to score again, turning two Leiser shots into takedowns of his own for a 6-2 victory.

A pair of Sabers had the chance to join Zeimet and Miller as district qualifiers by wrestling back for second.

That gave Simmons an opportunity to wrestle Forker for second, but the Knights held onto his spot with a fall.

One weight class up, sophomore Cael Grell found himself in the same situation.

He fell to Assumption’s T.J. Fitzpatrick in the semifinals at 126 pounds, but rebounded for a 12-3 major decision over West Liberty’s Sam Gingerich in the third-place match.

Fitzpatrick, meanwhile, topped Tipton’s Austin Lenz in the finals to give Grell the opportunity to battle Lenz.

In a tight match, a single reversal by Lenz proved to be the difference in his 2-0 win.

Junior 132-pounder Robert Howard was also third, hitting a reversal for two nearfall points in the final seconds of a 4-2 win, but was unable to wrestle back.

Zeimet and Beaver will face a pair of freshmen at Saturday’s district meet at Washington.

Miller (25-17) will find a familiar foe in his semifinal bout — Nash Altman (18-18) of Solon. The two wrestlers met at the WaMaC Conference tournament with Miller earning a fall.

Schurr (17-8), who successfully wrestled back and beat Leiser for second, will face the 2A Sectional 16 champion, freshman Brayden Hartman (20-13) of Washington, in the other semifinal.

Get to know the Wisconsin Badgers' 2020 basketball scholarship recruits

One Stop Shop for Farm and Crop