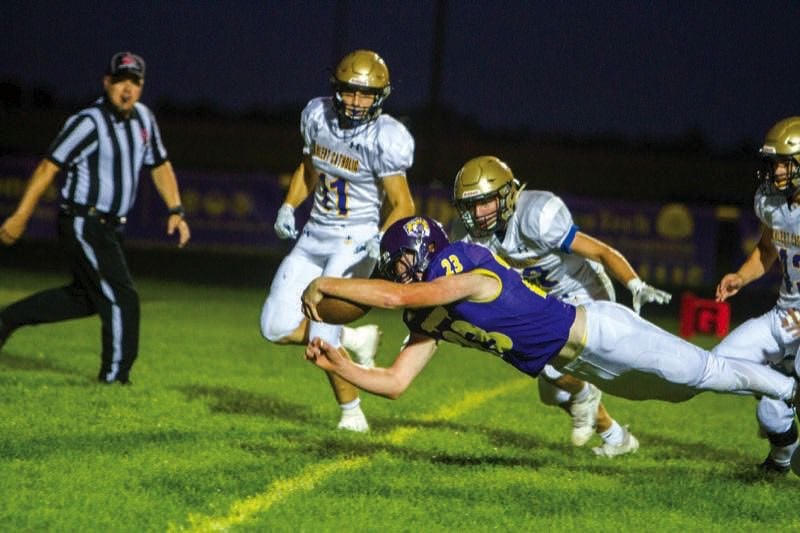 Central DeWitt senior Tucker Kinney dives across the goal line during the first quarter of Friday’s 16-14 homecoming victory over Dubuque Wahlert. Kinney’s 22-yard touchdown opened the game’s scoring and was one of eight receptions for Kinney, who gained 83 of the Sabers’ 199 yards through the air. 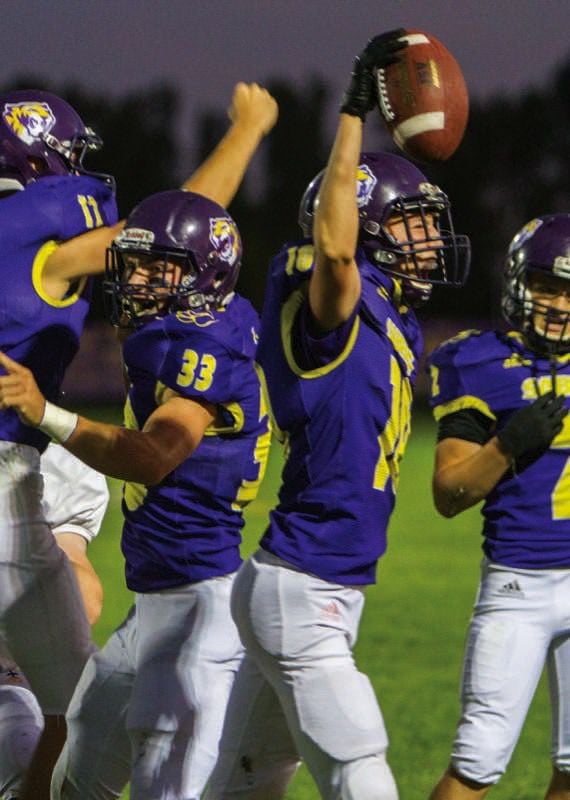 Central DeWitt senior Matthew Roling shows off the football while teammates (from left) John McConohy, Sean Kinney and Caleb Pace celebrate his fumble recovery in the first quarter of Friday’s homecoming game with Dubuque Wahlert. Roling would later add a key interception in the end zone to stop a Golden Eagles scoring threat and finished with five tackles in the Sabers’ 16-14 victory.

Central DeWitt senior Tucker Kinney dives across the goal line during the first quarter of Friday’s 16-14 homecoming victory over Dubuque Wahlert. Kinney’s 22-yard touchdown opened the game’s scoring and was one of eight receptions for Kinney, who gained 83 of the Sabers’ 199 yards through the air.

Central DeWitt senior Matthew Roling shows off the football while teammates (from left) John McConohy, Sean Kinney and Caleb Pace celebrate his fumble recovery in the first quarter of Friday’s homecoming game with Dubuque Wahlert. Roling would later add a key interception in the end zone to stop a Golden Eagles scoring threat and finished with five tackles in the Sabers’ 16-14 victory.

The Central DeWitt football team had just about everything it could have wanted in the first half of Friday’s homecoming game with Dubuque Wahlert.

The Sabers forced three Golden Eagles turnovers. They also put together a pair of scoring drives.

Really, the only thing missing for the Sabers at intermission was the lead.

Central took care of that late.

Still trailing by that halftime margin of 14-10, the Sabers marched 87 yards in 11 plays before junior quarterback John McConohy pushed the ball over the goal line for a one-yard touchdown.

The Central defense did the rest, turning the Golden Eagles over on downs twice to clinch a 16-14 victory.

Toughness was the word of the night for Central head coach Ryan Streets.

Facing a Golden Eagles squad intent on grinding out yards on the ground and dealing with their share of injuries, the Sabers’ fortitude was going to be put to the test.

The Central defense was up to the task early. Senior Tucker Kinney foiled the game’s first drive by recovering a Wahlert fumble and the Golden Eagles’ next drive lasted a single play as Matthew Roling dove on another fumble.

Starting on the Wahlert 27, the Sabers offense took advantage as junior quarterback Henry Bloom — who, still dealing with a week one injury, traded snaps with McConohy — found Kinney for a 22-yard touchdown. Landon Peterson added the extra point and it was 7-0 Sabers.

The visitors answered right back. The Golden Eagles ran nine straight run plays before turning their only pass into a four-yard score to knot things up at seven.

After trading punts, the Sabers struck again early in the second quarter.

Bloom hooked up with Logan Paulsen for a pair of first downs through the air and Lane Krukow converted his own third down with a nine-yard reception to move the ball to the Wahlert 11.

Once again, though, Wahlert had an answer, going 64 yards in eight plays before a 14-yard touchdown run gave the Golden Eagles the lead.

That advantage nearly grew at the end of the first half, too, as Wahlert used a 61-yard screen pass to advance the ball to the Central nine-yard line.

A first-down run, however, went backward and Roling jumped in front of a pass for an interception in the end zone that preserved the 14-10 halftime score.

The Sabers found success on their first two drives of the second half, but both ended in Wahlert territory without points.

The third drive was different. Bloom found Caleb Pace for a 21-yard pass to open the possession and the two players combined for an even bigger 24-yard pass on third-and-seven.

That moved the ball across midfield and, two plays later, the Sabers got even closer on a 20-yard reception by Sean McNamara.

Wahlert fought back, forcing a fourth-and-five at its own 13-yard line, but Bloom found Paulsen for an 11-yard gain to the two.

Two plays later, McConohy kept the ball himself and barreled ahead for the one-yard touchdown.

The extra point — a longer kick due to a penalty after the touchdown — was no good, but the Sabers led 16-14.

Now, it was up to the defense to make sure it held.

Things did not look good early as Wahlert gained 46 yards on a first-down run.

The next run, though, went backward five yards and the Golden Eagles could not recover, turning the ball over on downs.

Central wiped two more minutes off the clock before giving the ball back to Wahlert with less than two minutes remaining.

The Golden Eagles went to the air four times and all four passes ended up incomplete with Roling knocking down the final one to clinch the victory.

Kinney finished with eight receptions for 83 yards and his score. Pace and Paulsen both added three catches, while Krukow had two.

McConohy completed one of his own attempts for nine yards and also scored on the ground. He was one of five players — Pace, McNamara, Sean Kinney and Garrett Sailor — to pick up positive yards on the ground for the Sabers, who were without leading rusher Zach Hinkle after he was sidelined the week before.

Jeff Fuller, T. Kinney and Sailor led the Sabers with six tackles apiece. All six of Fuller’s tackles were solo and the junior added an interception as well.

Roling added five tackles, his own interception and a fumble recovery. T. Kinney also recovered a fumble and had three tackles for loss.

Connor Scheer and Ethan Pierce joined Roling with five tackles with Scheer also coming up with a sack.

The Sabers will wrap up their non-district slate with a visit to Camanche Friday.

The Indians are also 2-1, winning their first two contests before falling to North Cedar this past Friday, 21-7.

A victory would give Central a 3-1 non-district record for the second straight season.

Wisconsin Badgers, most Big Ten teams uncertain when athletes will return for workouts amid COVID-19 pandemic