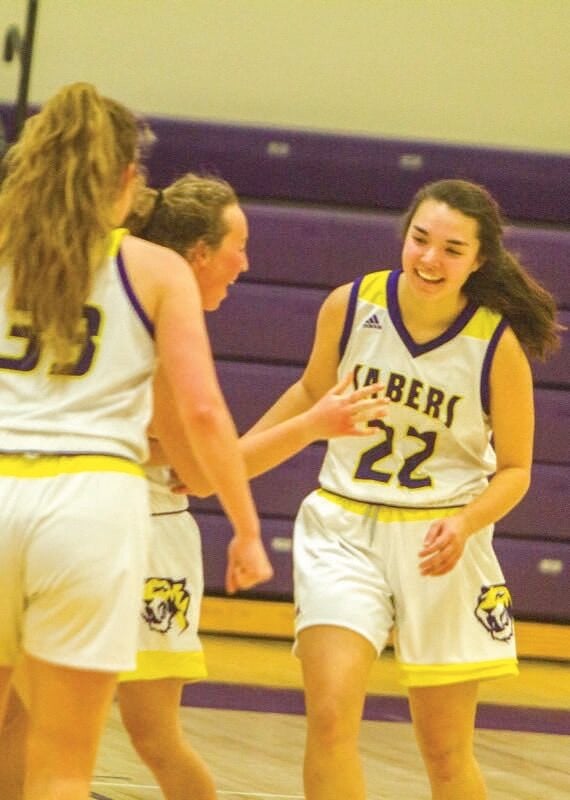 Central DeWitt senior Grace Pierce (22) gets congratulated by her teammates after hitting the third of three straight three-pointers in the third quarter of Tuesday’s game with 4A No. 5 North Scott. Pierce finished with five three-pointers that gave her a team-high 15 points in the Sabers’ 51-36 victory. 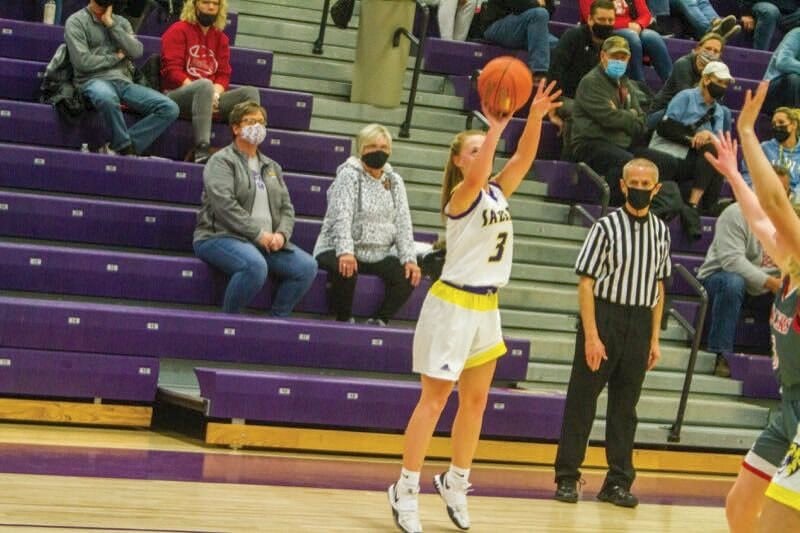 Sabers sophomore EmmaGrace Hartman rises for a three during the first half of Tuesday’s game with North Scott. Hartman buried three three-pointers and finished with 11 points, while the Sabers scored their first 30 points on threes.

Central DeWitt senior Grace Pierce (22) gets congratulated by her teammates after hitting the third of three straight three-pointers in the third quarter of Tuesday’s game with 4A No. 5 North Scott. Pierce finished with five three-pointers that gave her a team-high 15 points in the Sabers’ 51-36 victory.

Sabers sophomore EmmaGrace Hartman rises for a three during the first half of Tuesday’s game with North Scott. Hartman buried three three-pointers and finished with 11 points, while the Sabers scored their first 30 points on threes.

Visiting North Scott was not going to let the Central DeWitt girls basketball team’s dynamic junior duo beat them on the offensive end.

So, the Sabers used a flurry of three-pointers from its other members to do the trick.

Central DeWitt, ranked fourth in Class 4A, opened its 2021 in style, hosting the 4A No. 5 Lancers in a battle of MAC stalwarts Tuesday night.

Continuing the hot three-point shooting they ended 2020 with, the Sabers picked up right where they left off, scoring their first 30 points on three-pointers.

The defense took care of the rest, holding the Lancers to just 14 points after halftime to snap the two-time reigning 4A state champion’s 39-game win streak with a 51-36 victory.

The duo, who have averaged 33 points per game this winter, scored just 16, and did not tally their first two points until the third quarter.

But by that time, the Sabers had a six-point lead, as that same attention opened things up for their teammates behind the three-point line.

The threes came slowly to start: a game-opening trey by Grace Pierce and a second three by EmmaGrace Hartman were the Sabers’ only points of the first quarter as North Scott built a 10-6 lead.

That advantage grew to seven early in the second quarter, but the Sabers began to find a groove behind the arc.

Separate threes by Pierce, Natalie Butler and Kathryn Grau pulled Central DeWitt back within two (17-15), while back-to-back treys by Hartman gave the hosts a brief lead before a North Scott three gave the Lancers a 22-21 lead at the break.

The third quarter belonged to Pierce. The senior opened the second-half scoring with a three, then answered two Lancers points with another one.

North Scott came up empty on its next trip down the floor and then lost track of Pierce again who dropped in one more three to make it 30-24 and force a timeout.

The last of Pierce’s three treys also was the Sabers’ last three-pointer of the game, but Central DeWitt did just fine inside of the arc.

Hoops by Veach, Meadows and Madi McAvan gave the Sabers an eight-point lead by the end of the third quarter and Central DeWitt withstood a pair of early three-pointers by North Scott to start the fourth stanza by outscoring the Lancers 15-2 the rest of the way.

Buoyed by her five three-pointers, Pierce led all scorers with 15 points. Hartman added 11 points — she had three three-pointers — while Veach had 10 points, eight in the fourth quarter.

Meadows had six points and matched it with six rebounds, while also dishing out four assists. Talbot Kinney, meanwhile, paced the Sabers with six assists and added two steals. All told, all eight Sabers that saw action in the game scored.

That balance was on display again three days later in a 55-28 rout of Clinton.

Up nine (15-6) after a quarter, the Sabers put things away in the second stanza, shooting 6-of-10 from the field, including four three-pointers, and 7-of-8 from the line for a 23-point eruption.

The defense, meanwhile, limited Clinton to just 13 points after halftime to wrap up the win.

Pierce chipped in nine points, while Grau and Butler both had seven and McAvan six. McAvan added a team-high seven rebounds, while Kinney had five assists and Grau matched Meadows with three steals. Elaina Schroeder, meanwhile, blocked a pair of shots.

Turnover time: How the Huskers go about replacing Wan'Dale Robinson, Dedrick Mills and veterans up front