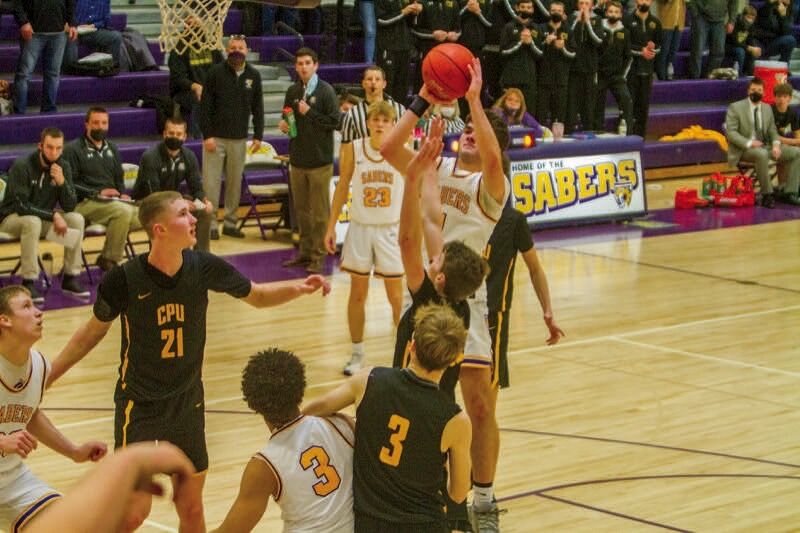 Central DeWitt senior Henry Bloom rises up for a shot in the lane late in overtime during Monday’s 4A Region 4 substate quarterfinal with Center Point-Urbana. Bloom made the shot with 12.7 seconds remaining and they proved to be the final points in a dramatic 52-51 victory. 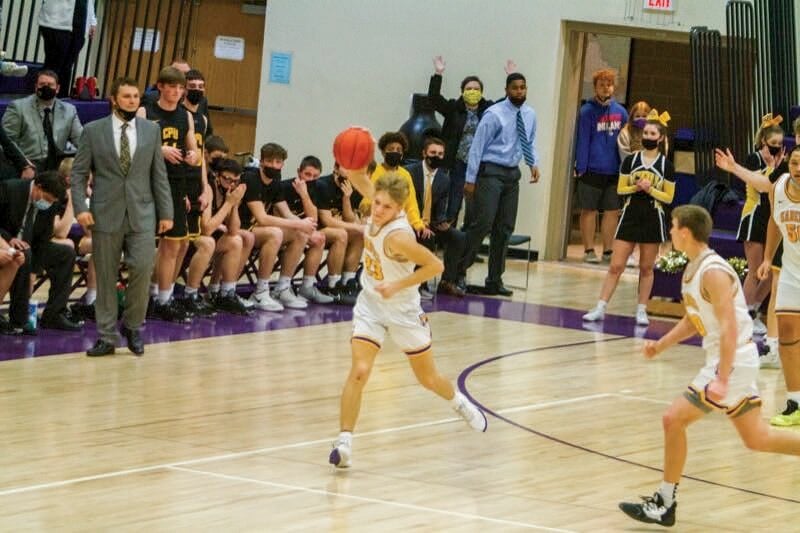 Central DeWitt junior Gibson McEwen winds up to spike the basketball in celebration after his steal in the final seconds of overtime clinched the Sabers’ 52-51 victory. The Sabers and Stormin’ Pointers traded the lead seven times in overtime, but McEwen’s interception of a Center Point-Urbana lob prevented there from being an eighth.

Central DeWitt senior Henry Bloom rises up for a shot in the lane late in overtime during Monday’s 4A Region 4 substate quarterfinal with Center Point-Urbana. Bloom made the shot with 12.7 seconds remaining and they proved to be the final points in a dramatic 52-51 victory.

Central DeWitt junior Gibson McEwen winds up to spike the basketball in celebration after his steal in the final seconds of overtime clinched the Sabers’ 52-51 victory. The Sabers and Stormin’ Pointers traded the lead seven times in overtime, but McEwen’s interception of a Center Point-Urbana lob prevented there from being an eighth.

Central DeWitt junior Gibson McEwen did not record an interception on the gridiron this past fall.

But the Saber certainly came up with a memorable one on the hardwood Monday.

With the Central DeWitt boys basketball team holding a one-point lead with 12 seconds left, but visiting Center Point-Urbana in possession of the basketball, it was McEwen who foiled the Stormin’ Pointers’ lob play by snatching the ball out of the air and dribbling the final seconds off the Sabers’ 52-51 overtime win in an instant classic.

Central DeWitt will play again Thursday in a substate semifinal with unbeaten Monticello. The Panthers, ranked second in the class, had no problem with Vinton-Shellsburg, routing the Vikings, 56-26.

McEwen’s big defensive play was the final volley in a back-and-forth second half and overtime period.

After the Pointers’ jumped in front for the first time (29-27) in the third quarter, the two teams traded the lead 13 times with four ties.

Sabers senior Henry Bloom opened the extra-period scoring with a free throw, but CP-U knocked down two of their own.

The Sabers countered with a Shawn Gilbert drive, while the Pointers turned to Trey Johannes inside.

McEwen gave the hosts the lead right back on a driving lay-up, but Johannes struck again to make it 51-50 CP-U.

Central DeWitt turned to Bloom, who got position inside and went up strong for a short jumper inside to make it 52-51.

The Pointers’ called timeout and tried to set up another open look for Johannes, but McEwen was there to yank down the potential lob.

The Sabers burst out of the gate, receiving contributions from six different players during a 16-4 run to open the game.

Central DeWitt scored the contest’s first nine points. Matthew Walker and Kaiden Muhl both knocked down early shots and Bloom buried a three, while Gilbert grabbed a teammate’s miss and laid it in for two more.

CP-U stopped the run with its first two points, but McEwen buried his own three, while Gilbert and Muhl added additional buckets to help the Sabers to a 12-point lead.

That lead was cut in half quickly, however, with back-to-back threes as the Pointers’ scored the final eight points of the stanza.

Another CP-U three to open the second quarter trimmed the lead all the way down to one and that was the same margin (25-24) as the two teams headed to the break.

The two teams stayed close the rest of the way with the largest lead for either side being just four points.

It was the Pointers who held that four-point edge, going in front 41-37 in the fourth quarter, but the visitors had trouble slowing down Gilbert, who scored the Sabers’ final six points of regulation, including a free throw that ultimately sent the game to overtime. Gilbert had a chance to end things in regulation, but his jump hook in the lane rimmed out, while the Pointers’ desperation heave also missed the mark.

The victory helped erase the memory of a tough final week of the regular season as Central DeWitt fell twice in MAC-play to Davenport Central and Pleasant Valley.

The Sabers erased one big deficit during Tuesday’s home contest with the Blue Devils, but could not finish a second comeback in a 55-50 setback.

Davenport Central used a 17-5 start to the second quarter to build a 30-14 lead, only to see Central DeWitt score the final seven points of the half and then the first nine of the second half to knot things up at 30.

The Blue Devils, though, countered the Sabers’ monster run with a smaller 9-0 push that ultimately gave them the lead for good.

Central DeWitt did get back within two — at 49-47 — in the fourth quarter, but they could not reel Central all the way in.

Gilbert dropped in a team-high 16 points and added 11 rebounds, while Watters — who knocked down a game-tying buzzer-beater in the first meeting between the two teams — had a double-double with 11 points and 10 boards. McEwen had seven points, while joining Muhl with two steals apiece.

The Spartans, ranked fifth in 4A, limited Central DeWitt to just nine points in the first half and 25 points overall — the seventh time they have held an opponent under 30 points this season — in a 45-25 victory.

The Sabers were limited to just 27 shots total and were just 3-of-13 from behind the arc.

Ben Mason, Bloom and John McConohy all had four points, while McEwen came up with a pair of steals.