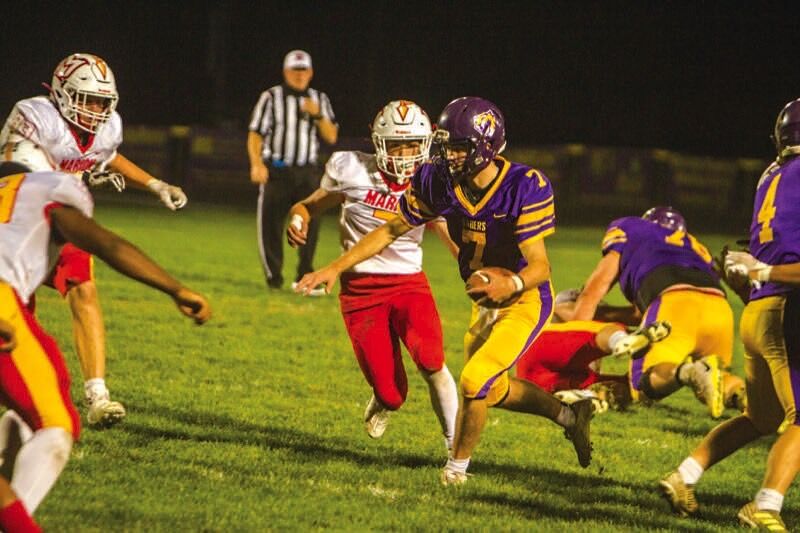 Central DeWitt quarterback Henry Bloom looks for an opening as Marion defenders close in during a third quarter run in Friday’s 3A District 4 finale with the Indians. Bloom threw for a career-high 256 yards and a touchdown and added 24 yards on the ground, scoring the winning touchdown of the Sabers’ 27-24 victory on a one-yard run with 36 seconds remaining. 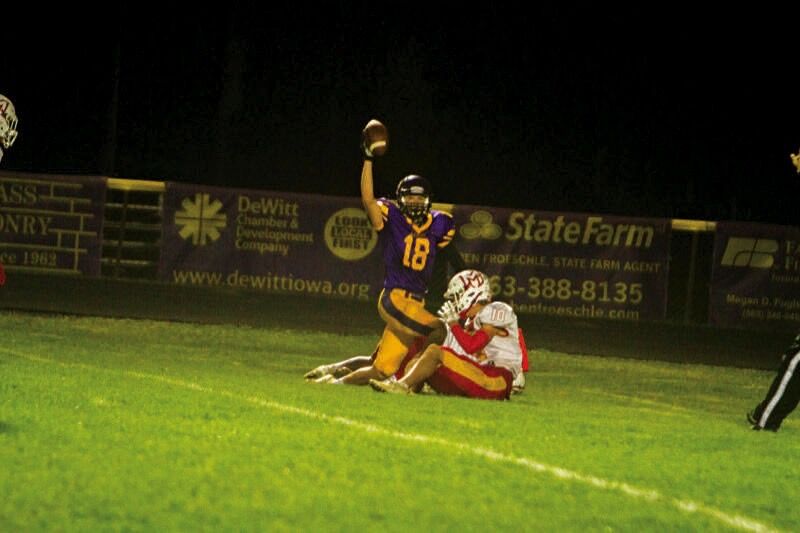 Central DeWitt senior John McConohy holds the football in the air after coming down with a 38-yard reception late in the fourth quarter of Friday’s regular season finale with Marion. McConohy’s catch moved the Sabers deep into Indians territory and the senior later added a key third-down conversion to set up the winning score.

Central DeWitt quarterback Henry Bloom looks for an opening as Marion defenders close in during a third quarter run in Friday’s 3A District 4 finale with the Indians. Bloom threw for a career-high 256 yards and a touchdown and added 24 yards on the ground, scoring the winning touchdown of the Sabers’ 27-24 victory on a one-yard run with 36 seconds remaining.

Central DeWitt senior John McConohy holds the football in the air after coming down with a 38-yard reception late in the fourth quarter of Friday’s regular season finale with Marion. McConohy’s catch moved the Sabers deep into Indians territory and the senior later added a key third-down conversion to set up the winning score.

With the start of the playoffs just a week away, now was the time for the Central DeWitt football team to score some late momentum.

A last-minute, game-winning touchdown should do the trick.

The Sabers trailed Marion, 24-20, after the second of the Indians’ two fourth-quarter touchdowns and needed an answer fast.

They responded with their best second-half drive of the season.

The score — and extra point by Landon Peterson — not only put Central DeWitt in front, it also left Marion with just over 30 seconds to come up with their own answer.

The Indians could not, clinching the Sabers’ 27-24 victory and the team’s second winning regular season in three years.

The start of an expanded 3A playoffs is up next as Central DeWitt is set to host Clinton in a first-round contest on Friday.

The Sabers will enter that contest riding the wave of its late offensive heroics.

The late score did not seem to be necessary early in the second half. Up 17-8 at halftime, the Sabers forced two Indians three-and-outs to start the third quarter and added to their lead with a 31-yard Peterson field goal.

The Marion rushing attack, though, began to wake up. The Indians produced an 11-play drive that bridged the third and fourth quarters and ended with a two-yard rushing touchdown from quarterback Alex Mota.

After a Sabers punt, the Indians struck again, this time going 80 yards in just five plays before Mota — who had 184 yards on the ground — struck again with a 22-yard touchdown run. That, combined with a successful two-point try, made it 24-20 Marion.

With just over four minutes remaining, the Sabers provided their response.

Bloom connected with Kaiden Muhl and Garrett Sailor for an early first down then went deep, looking for McConohy down the visiting sideline. Leaping between a pair of Marion defenders, McConohy came down with the ball at the Marion 12-yard line.

McConohy added a second big play moments later, converting a third-and-five on the ground to give the Sabers a big first down at the two.

Central DeWitt was content with simply surging forward from there. Bloom was stopped a yard short on first down, but got over the goal line on his second try for the winning score.

Marion’s last-chance effort was foiled by penalties on back-to-back plays, and a lateral-filled final play was stopped on the Indians’ own 34-yard line.

The Sabers faced an early deficit in the game as Mota kicked off his big night on the ground with a 90-yard sprint to the end zone before adding a two-point run as well to make it 8-0.

Central DeWitt, stopped on the game’s opening drive, came right back. McConohy picked up an early third down with a 12-yard run and, a play later, Bloom found Muhl for a 54-yard pass to the Marion three-yard line.

Sailor took care of the rest, scoring from three yards out, to make it 8-7 after Peterson’s extra point.

The Sabers struck again in the second quarter, this time marching 94 yards in 10 plays. Central DeWitt escaped the shadow of its own goal line thanks to a 46-yard pass from Bloom to Gibson McEwen.

That moved the Sabers past midfield and the Sabers got even closer on first-down runs by Sailor and Muhl before Bloom hit Muhl for an eight-yard touchdown pass that gave the hosts the lead.

After quickly forcing a Marion punt, Central DeWitt capped off the first half with a 38-yard Peterson field goal that was set up by receptions by Muhl and McEwen with the former’s catch, a 13-yard gain, coming on fourth-and-nine.

Bloom completed 12 of his 20 attempts for 256 yards and a touchdown to Muhl, who finished with five catches for 89 yards. McEwen paced the Sabers with 110 yards on his four receptions, while Sailor caught two passes and added a team-high 57 yards on the ground. McConohy’s lone catch was his fourth-quarter reception and the senior added 29 yards on the ground. Muhl, meanwhile, had 53 rushing yards.

Sean Kinney led the way on defense with 10 tackles, including nine solo stops and two for loss. Peterson added eight tackles (three solo), while McConohy and Tyson Belk both had six stops. McConohy and Boomer Johnson also had tackles for loss and Cody Penniston stopped a second-quarter Marion drive by recovering a fumble.

The Sabers’ first-round playoff matchup with Clinton will be a rematch of an earlier district contest as Central DeWitt hit the road for a 35-0 victory over the River Kings on the final Friday of September.

The Sabers scored five first-half touchdowns in the win, nearly amassing 200 passing yards (199) and 200 rushing yards (241) in the process.

The other team joining the Sabers and River Kings in their pod (Class 3A was divided into 16 pods — 11 with three teams, five with four teams — the winners of those pods will be re-bracketed before the third round) is Davenport Assumption, which has a bye and will await the winner in the second round.

Another member of 3A District 4, the Knights went a perfect 7-0 during the regular season, including earlier victories over both Central DeWitt and Clinton.

Frost: Adrian Martinez 'is going to be our quarterback'; Huskers feel like they have two starters