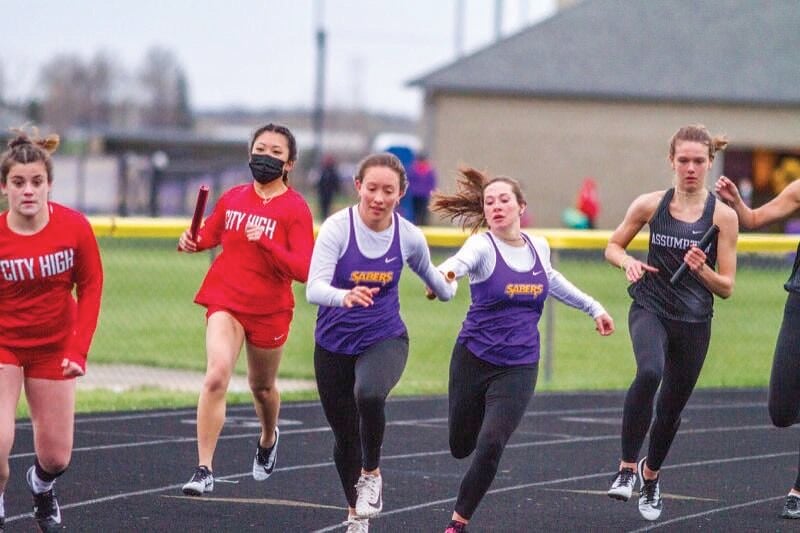 Central DeWitt seniors Colleen Klostermann and Morgan Machovec exchange the baton during the 4x200 relay at Monday’s Saber Co-Ed meet. The duo, along with Savanah Meyne and Allie Meadows, won the event with a clocking of 1:54.35. That was one of three titles for the Sabers, who took the team crown as well. 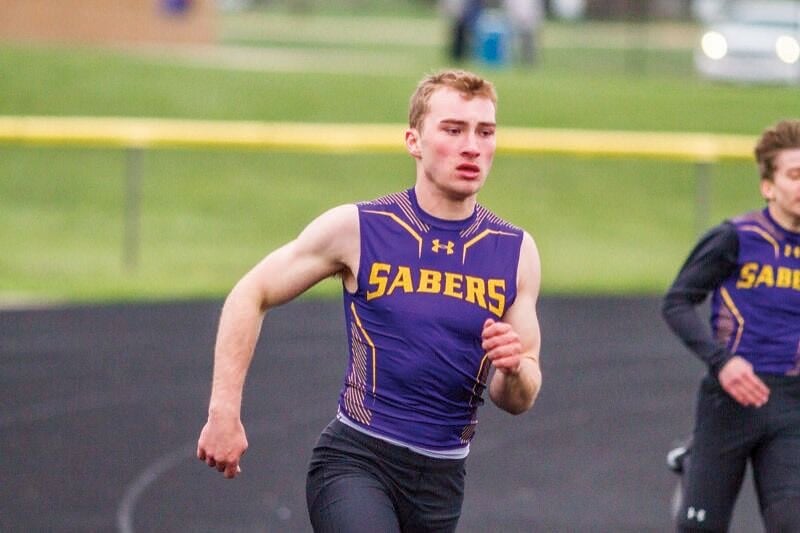 Central DeWitt seniors Colleen Klostermann and Morgan Machovec exchange the baton during the 4x200 relay at Monday’s Saber Co-Ed meet. The duo, along with Savanah Meyne and Allie Meadows, won the event with a clocking of 1:54.35. That was one of three titles for the Sabers, who took the team crown as well.

Through quality and quantity, the points came in bunches for the Central DeWitt boys and girls track teams at Monday’s Saber Co-Ed Relays.

The Sabers picked up their points from a variety of sources: the boys scored in 18 of 19 events, the girls in 17; and combined for a whopping 31 top-three finishes.

The result was a title sweep as the boys tallied 159 points — 45 more than Iowa City High and Camanche, which tied for second, while the girls topped North Scott by 13 points, 128-115.

The boys’ impressive total was propelled by their dominance in the relays and the two 400-meter individual races.

The Sabers won five of the seven relays, including three — the sprint medley, 4x800 and shuttle hurdle — in short succession.

The sprint medley team of Nic Reemtsma, Ben Pace, Lucas Burmeister and Will Ginter finished nearly two seconds ahead of the field with their time of 1:41.75, while the 4x800 team of Hunter Blankenship, Carter Donovan, Sam Bloom and Brady Freeman cruised to their victory in 9:03.35.

The shuttle hurdle team, meanwhile, just missed out on their season-best of 1:09.06 with the quartet of Tristan Rheingans, Matthew Watters, Luke Schlimmer and Gus Pickup clocking in at 1:09.74.

The Sabers made it a medley sweep with the distance group of Watters, Tyler Herington, Blankenship and Wyatt Sailer matching the sprint crew with a title in 4:16.03 and the 4x400 team (Alex Fuller, Ginter, Blankenship and Burmeister) wrapped up the meet with a final title in 3:39.71.

Senior Sean Kinney took top honors in the 400-meter dash, crossing the finish line in 54.79, while Ginter was right behind him in second in 55.04.

Later in the meet, Rheingans topped the field in the 400-meter hurdles, finishing in 1:02.85, with fellow freshman, Gus Pickup, earning runner-up honors with his time of 1:04.96.

Burmeister secured the Sabers’ final title, motoring to a 200-meter dash crown in 23.14.

In addition to his shuttle hurdle and distance medley crowns, Watters was second in the high jump, clearing 5-4 and winning a tiebreaker with teammate Colby Cornelius, who also cleared 5-4 and took third.

It was one of three thirds in the field events for the Sabers, who earned the same placing in the long jump on a leap of 19-1 by Fuller and the shot put behind a toss of 43-9.5 by senior Cole Miller.

Reemtsma, Meyer and Herington teamed together in the 4x200 as well with the trio joining Jacob Maher to place fourth in 1:43.63.

Miller added a fifth-place throw of 122-9 in the discus to his third in the shot put, while Maher secured sixth in the latter event with his own toss of 39-6.

The Central DeWitt girls’ depth was on display not just in the many events it scored points, but also its ability to put two competitors in the top six, something it did six times, leading to more team points.

That was especially true in the 100-meter hurdles and long jump where Sabers took each of the top two spots.

Sophomore Soren Maricle got to the finish line first in the 100 hurdles, doing so in 17.77, which was less than a half-second before junior teammate Ava Morris, who took second in 18.09.

Seniors Morgan Machovec and Savanah Meyne, meanwhile, produced the two best jumps in the long jump with Machovec topping the field with her leap of 15-7, while Meyne produced her best effort of the season, 15-4.5, to take second.

Both Sabers teamed up for Central DeWitt’s final crown, running the middle legs on the championship 4x200 team. Colleen Klostermann and Allie Meadows bookended the relay, which clocked in at 1:54.35.

The Sabers also picked up two runner-up finishes in the field events: Maricle won a tiebreaker with North Scott’s Sydney Skarich to take second in the high jump after both competitors cleared 5-0, while senior Talbot Kinney had a second-place throw of 108-9 in the discus.

Central DeWitt’s final second came from sophomore Hannah Sunday, who posted a time of 14:46.86 in the 3,000-meter run, where she was followed by fellow sophomore Zoey Tiefenthaler, who took third in 15:20.51.

The Sabers picked up multiple points in the other distance event as well with sophomore Reagan Hofer placing third in the 1,500-meter run with her time of 6:08.59, while freshman Hannah Peters was fifth in 7:15.42.

Meyne matched Klostermann with a fifth-place time of 29.75 in the 200-meter dash, while Tiefenthaler was sixth in the 800-meter run with her clocking of 3:11.75.

The rest of the Sabers’ points came in the relays: the 4x400 team of Haley Guldner, Regina Klostermann, Eliza Petersen and Alexis VanZee took fourth in 5:30.86, while the 4x800 (Peters, Hofer, Guldner and Petersen) and distance medley (R. Klostermann, Taylor Huff, Tori Rheingans and Hofer) teams both were fifth in 12:17.42 and 5:30.00, respectively.

What to watch for in Wyoming football's spring game

Missouri baseball running out of hope

Cloudy skies this morning will become partly cloudy this afternoon. Slight chance of a rain shower. High around 60F. Winds NE at 10 to 20 mph.