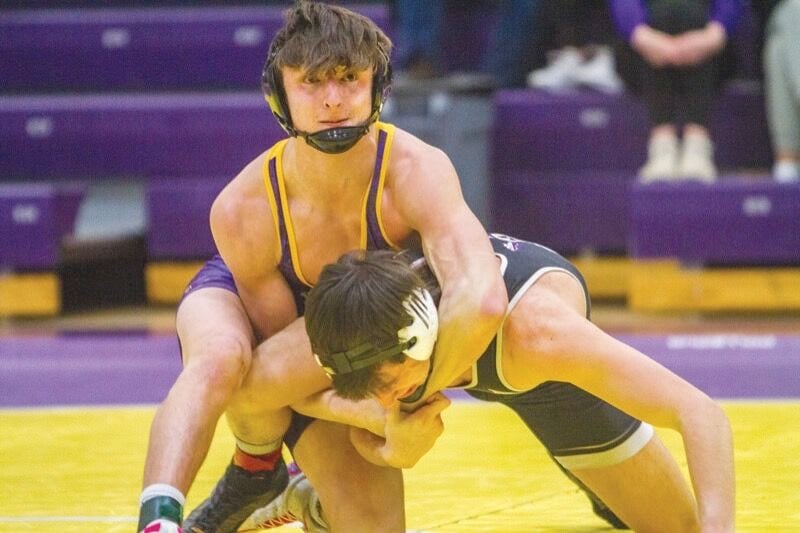 Central DeWitt senior Carter Donovan prepares to pull back on a cradle during his match with Muscatine’s Conner Beck. Donovan won the 152-pound title at Saturday’s Bob & Liz Schnarr Invitational, knocking off the eighth-ranked 2A wrestler in Illinois in the final. Junior Sam Gravert added his own title for the Sabers, who finished fifth as a team. 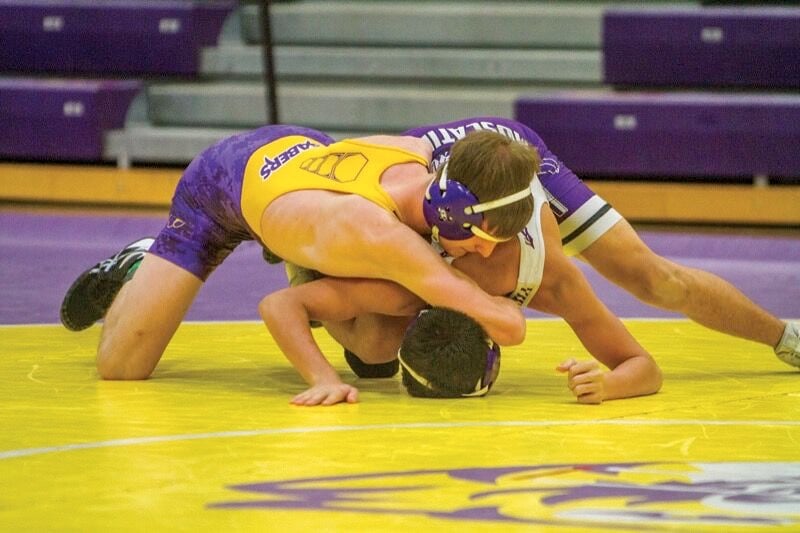 Central DeWitt senior Carter Donovan prepares to pull back on a cradle during his match with Muscatine’s Conner Beck. Donovan won the 152-pound title at Saturday’s Bob & Liz Schnarr Invitational, knocking off the eighth-ranked 2A wrestler in Illinois in the final. Junior Sam Gravert added his own title for the Sabers, who finished fifth as a team.

MORTON, ILLINOIS — There proved to be no shortage of new opponents to start the new year for the Central DeWitt wrestling team.

The Sabers crossed the Mississippi River Saturday to be the lone Iowa school to take part in the Bob and Liz Schnarr Invitational held in Morton (southeast of Peoria).

And Central DeWitt represented its state well, crowning a pair of champions and putting four more in the top three as part of a fifth-place finish with 135.5 points.

Sabers senior Carter Donovan knocked off a pair of highly-regarded foes en route to a title at 152 pounds.

The second-seed, Donovan rolled through the quarterfinals with a fall in 25 seconds, then pinned Xavier Edwards (honorable mention in 2A in Illinois) in 59 seconds to reach the final.

Donovan missed out on a third-straight fall, but he handed Dunlap’s Nick Mueller (ranked eighth in 2A) just his second loss of the season, using two takedowns, a two-point nearfall and a pair of escapes to secure an 8-6 victory.

Junior Sam Gravert, meanwhile, lived up to his top seed at 285 pounds by claiming his own title.

Gravert opened his day with an 8-0 major decision and then moved into the final with a fall in 2:22 against Matt Hanold of Triad.

After a scoreless first period in his championship match with Geneseo’s Levi Neumann, Gravert rode out Neumann for the entirety of the second period. The Saber then chose bottom to start the third period and quickly got a reversal before later adding a takedown to finish off a 4-1 victory.

Four Sabers added third-place finishes. Senior Ryan Kramer advanced to the semifinals at 132 pounds with a fall in 3:37 and bounced back from a setback to Mascoutah’s Santino Robinson — top-ranked in Illinois’s 2A class — to topple Chase Daugherty of Peoria Notre Dame by a 9-5 decision.

Fellow senior Cael Grell opened his day at 145 pounds with a quick fall — 29 seconds — and followed up a semifinal setback with a dominant 16-1 technical fall in his third-place match with Geneseo’s Josh Hock.

Sophomore 195-pounder Layton Slaymaker also pinned his way to the semifinals before closing his day with a 12-8 decision to take third.

After earning a bye to the semifinals, 220-pound senior Mitchell Howard fell to Geneseo’s Tim Stohl — ranked sixth in 2A — but answered back with a fall in 2:39 over Triad’s Nathan Engler.

Sophomore Elston Lindner also made the semifinals at 170 pounds, thanks to a 10-6 win in the quarterfinal, before ultimately finishing fourth, while freshman Chris Wrage and sophomore Colton Sullivan were both fifth and Lawrence Flynn sixth.

Central DeWitt kicked off its 2022 by taking down Muscatine, 42-26, in a home dual Thursday.

It proved to be a night of runs.

Muscatine answered back with four wins of their own to briefly take a 21-18 lead, but the Sabers won four of the final five bouts, earning the maximum six points in all four as Dolan Theisen scored a pin in 2:40 at 106 pounds, while Gravert, Austin Miller and Tate Stockman each earned forfeits.

'It's almost like a call home': Arizona makes inroads in recruiting Polynesian players