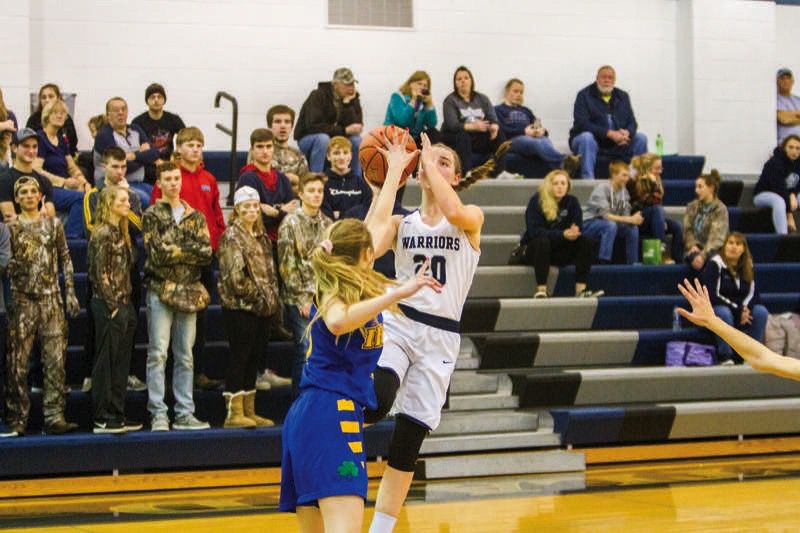 Calamus-Wheatland sophomore Addy Widel goes up for a shot during Tuesday’s Tri-Rivers East clash with Prince of Peace. Widel scored a team-high 18 points, but the Irish outscored the Warriors, 18-8, during the fourth quarter to rally for a 53-47 win. 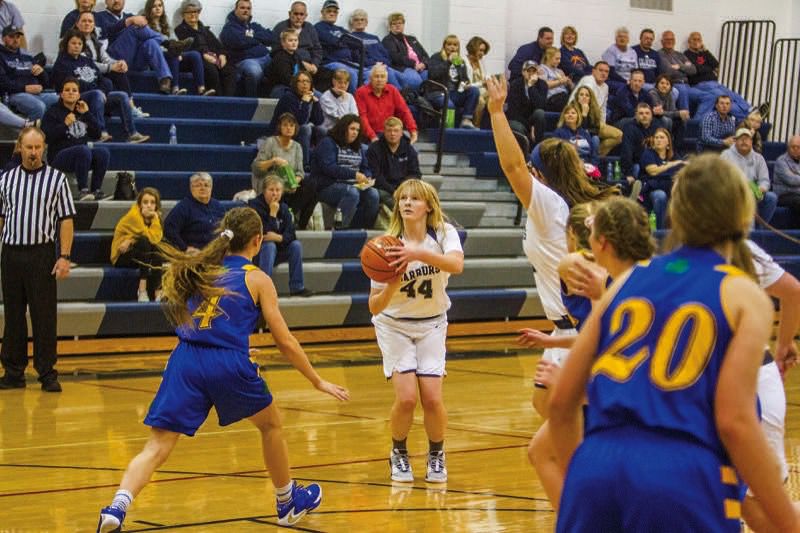 Warriors senior Addison Luepker lines up a three-pointer during the first half of Tuesday’s season opener with Prince of Peace. Luepker knocked down a trio of three-pointers and finished with 11 points.

Calamus-Wheatland sophomore Addy Widel goes up for a shot during Tuesday’s Tri-Rivers East clash with Prince of Peace. Widel scored a team-high 18 points, but the Irish outscored the Warriors, 18-8, during the fourth quarter to rally for a 53-47 win.

Warriors senior Addison Luepker lines up a three-pointer during the first half of Tuesday’s season opener with Prince of Peace. Luepker knocked down a trio of three-pointers and finished with 11 points.

WHEATLAND — One quarter away from a big season-opening victory over a division rival, the Calamus-Wheatland girls basketball team picked the wrong time to go cold during Tuesday’s Tri-Rivers East clash with Prince of Peace.

The Warriors led the Irish, 39-35, heading to the fourth quarter, but then made just three of their 16 attempts from the field during the final stanza.

The visitors took advantage. Prince of Peace opened the fourth quarter with an 11-3 run and then iced things away at the free throw line to clinch a 53-47 victory.

The opportunities were there for the Warriors.

In a game dictated by whistles — the two teams combined for 51 fouls — the Warriors went to the free throw line 21 times, but were able to make just seven of their attempts.

The Cal-Wheat defense, meanwhile, limited the Irish to just 31 percent shooting from the floor, but Prince of Peace outscored the Warriors, 34-18, in the paint, thanks, in large part, to a 27-13 edge in offensive rebounds.

It was the second-half shooting swoon, however, that proved most costly.

After taking their biggest lead of the night — 37-31, after an Emily Knudtson three-point play — midway through the third quarter, the Warriors made just one of their next nine field goal attempts.

The Irish, meanwhile surged back, putting together a 12-4 run that bridged the third and fourth quarters and gave the visitors their first lead of the second half.

The Warriors pulled within a point twice — the first time on a free throw by Addy Widel, the second on a three-pointer by Addison Luepker — but Prince of Peace answered Luepker’s trey with seven straight points, all of them coming from the free throw line, to pull away for good.

The Irish opened up a 7-2 lead in the game, but three-pointers by Luepker and Widel closed the gap in a hurry and Prince of Peace’s lead was down to one (11-10) by the start of the second quarter.

The Irish advantage was back to three when the Warriors reeled off six straight points to take their first lead.

Senior Hannah Tack got things rolling with a put-back of a teammate’s miss, while Widel and Alison Boeckmann added hoops of their own to put Cal-Wheat in front 18-15.

Prince of Peace jumped back in front, but it did not last long as the Warriors went into the half with the momentum.

Widel hit a big three-pointer and later broke a 23-23 tie with two free throws before Luepker provided the exclamation point to the Warriors’ 17-point second quarter with a steal and lay-up just before the halftime buzzer.

Cal-Wheat’s lead shrank to one (30-29) early in the third quarter, but Karragan Whitman knocked down a free throw and Luepker buried a three before Knudtson capped off a 7-2 run with her three-point play to give the Warriors their biggest lead.

Widel led the way for Cal-Wheat with 18 points, while Luepker, who knocked down three three-pointers, joined her in double figures with 11 points.

Tack chipped in eight points, while Knudtson had six.

Overcast skies and windy. High around 15F. Winds WNW at 25 to 35 mph. Winds could occasionally gust over 50 mph.

Intervals of clouds and sunshine. Much colder. High 9F. Winds WNW at 10 to 20 mph.